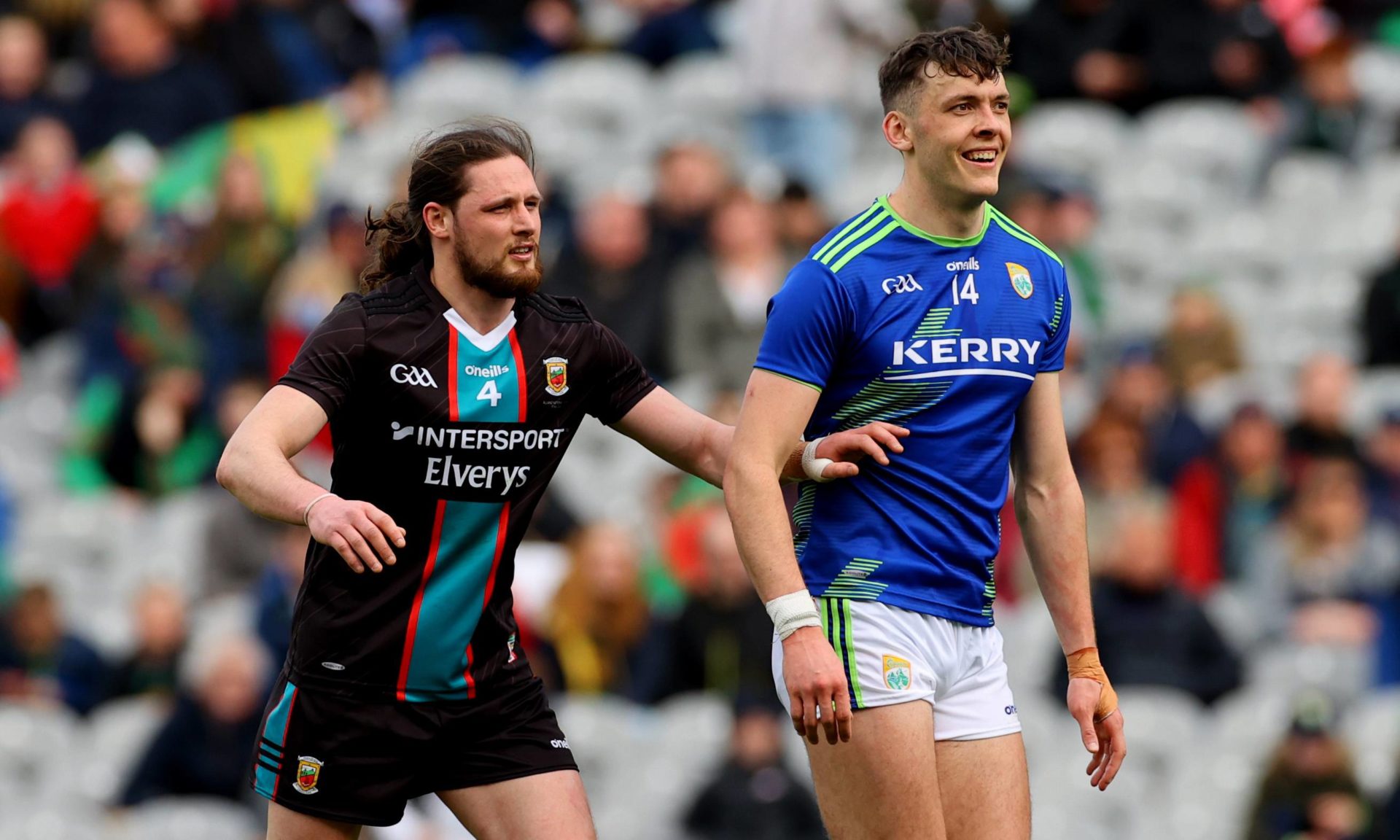 Mayo’s Padraig O’Hora and David Clifford of Kerry could be set to renew rivalries in Croke Park. Picture: INPHO/James Crombie

Seven. That’s how many changes there were to the Mayo side beaten by Kerry in the Allianz Football League final and that which started against Kildare in the second round of All-Ireland Qualifiers last Saturday week. For sixty minutes against the Lilywhites, the changes had made no difference; Mayo were every bit as poor as they had been against the Kingdom, only that their opponents this time hadn’t the same array of tools to make them pay.
The narrative surrounding that Division 1 final was that Mayo manager James Horan displayed all the interest of a vegan in a Texas Steakhouse for the game or its result and that all focus was instead on the start of the championship three weeks later. We all know how that ended.
Adding Conor McStay to the substitutes’ bench without as much as one minute of FBD League football to his name let alone league, and selecting Rory Brickenden at centre-back (who has yet to play one minute of championship football this summer) for the final of what is supposedly the second biggest prize in Gaelic football certainly added weight to the theory that Mayo’s minds were on other things the day that Kerry whipped them by fifteen points in what was the county’s heaviest defeat in senior football since losing by 20 points to Cork in the 1993 All-Ireland semi-final.
There were mitigating circumstances, to be fair. Goalkeeper Rob Hennelly and defenders Paddy Durcan and Oisin Mullin all missed the league final through injury and if evidence was required as to their value to Mayo, the team since their return has conceded less in its last two championship games against Monaghan and Kildare combined than the 3-19 that Kerry fired between the posts in Croke Park on April 3, all but three points of which came from play.
Indeed, be it the injuries to those three or to Ryan O’Donoghue, Michael Plunkett, Jordan Flynn, Eoghan McLaughlin, Cillian O’Connor, Brendan Harrison, Bryan Walsh, Darren McHale or Tommy Conroy at various stages of this season, it has been impossible for James Horan to try and establish his preferred fifteen players even if he wanted to. That’s been in sharp contrast to how Jack O’Connor has approached Year One of his third run as Kerry boss; the 1 to 9 who started against Mayo in the league final were also selected in the same positions for this month’s Munster SFC final demolition of Limerick and of the three players O’Connor added to his attack, Sean O’Shea, Killian Spillane and Tony Brosnan hit 1-12 (1-10 from play) of the 1-28 scored against the Treaty County, a game that ended with Limerick manager Billy Lee effectively thanking the Kerry players for going for points as opposed to goals. You wonder if David Clifford would have been so considerate had he been on the pitch.
The Fossa maestro was the talk of the country after his magical display against Mayo in the Division 1 final; the goal and six points he scored from play was equal to what the entire Mayo team had managed to score from play – and this was long before Ryan O’Donoghue was injured! But Clifford had to sit out the Munster decider on account of a knock (a GAA word that covers a multitude) that O’Connor said his captain had sustained against Cork in the previous round. Information on how well the 23-year-old has recovered is thin on the ground but we do know the prodigious forward is prone to injury, limping off against Clare and, most significantly, against Tyrone during last year’s championship campaign. However, the four-week break between the provincial and All-Ireland quarter-finals is likely to have benefited Clifford and all eyes will be on what Mayo player, and what Mayo system, is deployed in an effort to curb the influence of the University of Limerick student.
Asking Padraig O’Hora to go man-on-man backfired spectacularly in the open expanses and firm sod of Croke Park almost three months ago and it would seem almost certain that if Mayo are to have any chance of reversing that result, and their much narrower Round 5 defeat in Tralee a month earlier, they will have to afford Clifford double the attention through use of a sweeper-type player.
Personally, I’d like to see Paddy Durcan assigned the primary marking duties of David Clifford as he appears to me the Mayo defender most athletically matched in terms of height and speed – and he has past experience of specific man-marking jobs in front of big crowds at Croke Park. And then when Mayo are in possession, Durcan’s serious attacking instinct could also force Clifford to either expend his energy pursuing his marker or risk Mayo benefitting from natural overlaps further up the pitch. 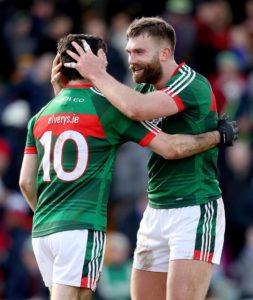 Kevin McLoughlin and Aidan O’Shea: one is named on the bench, the other named to start.

As for a sweeper, Kevin McLoughlin probably remains the most obvious option, someone who has operated the role before and an excellent linkman to boot, except it’s a system Mayo have not trialled this season nor any season under the current management, nor has McLoughlin many championship minutes under his belt or many starts at all to his name this year and neither has he been named in the team to start this Sunday’s match. It would be a high-risk move and yet it would seem apparent to most observers that Mayo are going to have to attempt something left of their centre if they are to tame the threat of the outright favourites to win this year’s All-Ireland Championship.
What’s not beyond the bounds of possibility is that James Horan does make changes to the team already named to start and actually selects seven defenders i.e. the six who started against Kildare plus Padraig O’Hora, who had such an impact off the bench in that game, helping create the second-half goal for Oisin Mullin that helped transform Mayo. It would limit Mayo’s options off the bench when the game was in the melting pot – but at least it might help get us as far as the melting pot because whatever way you dress it up, Mayo are underdogs this Sunday for very good reason. The fact the team has reached the past two All-Ireland finals carries only so much weight; this year’s form is just too patchy – both in-game and between games – to state with any great certainty that Mayo can sustain a level of performance that will trouble Kerry or even if they produced their very best form over 70-minutes, that it would be good enough to see them advance.
The potency necessary to trouble a side of Kerry’s quality just hasn’t been evident among Mayo’s starting forwards across the three championship matches to date and the news that not alone will Ryan O’Donoghue have no involvement in the game but that Darren McHale is now also ruled out through injury are hammer blows. The return to fitness of Jordan Flynn and his inclusion at midfield could now prompt management to move Aidan O’Shea much closer to the Kerry goal-mouth – either that or use him as some sort of blocker in front of Clifford. And a goal that Eoghan McLaughlin has continuously threatened would be especially welcome, so too some of the explosivity that is undoubtedly within James Carr’s armoury but which has yet to be seen this summer. And with only three points from play to his name this championship, there’d be no better time for Cillian O’Connor to rediscover his best form or for Jack Carney to truly announce himself and relieve that burden of responsibility on Mayo’s all-time top scorer. Or, ideally, for both to happen!
Let’s at least find out if our best really could be good enough. If it’s not, where’s the shame?

This article is an updated version of that which appeared in last Tuesday’s edition of the Western People.