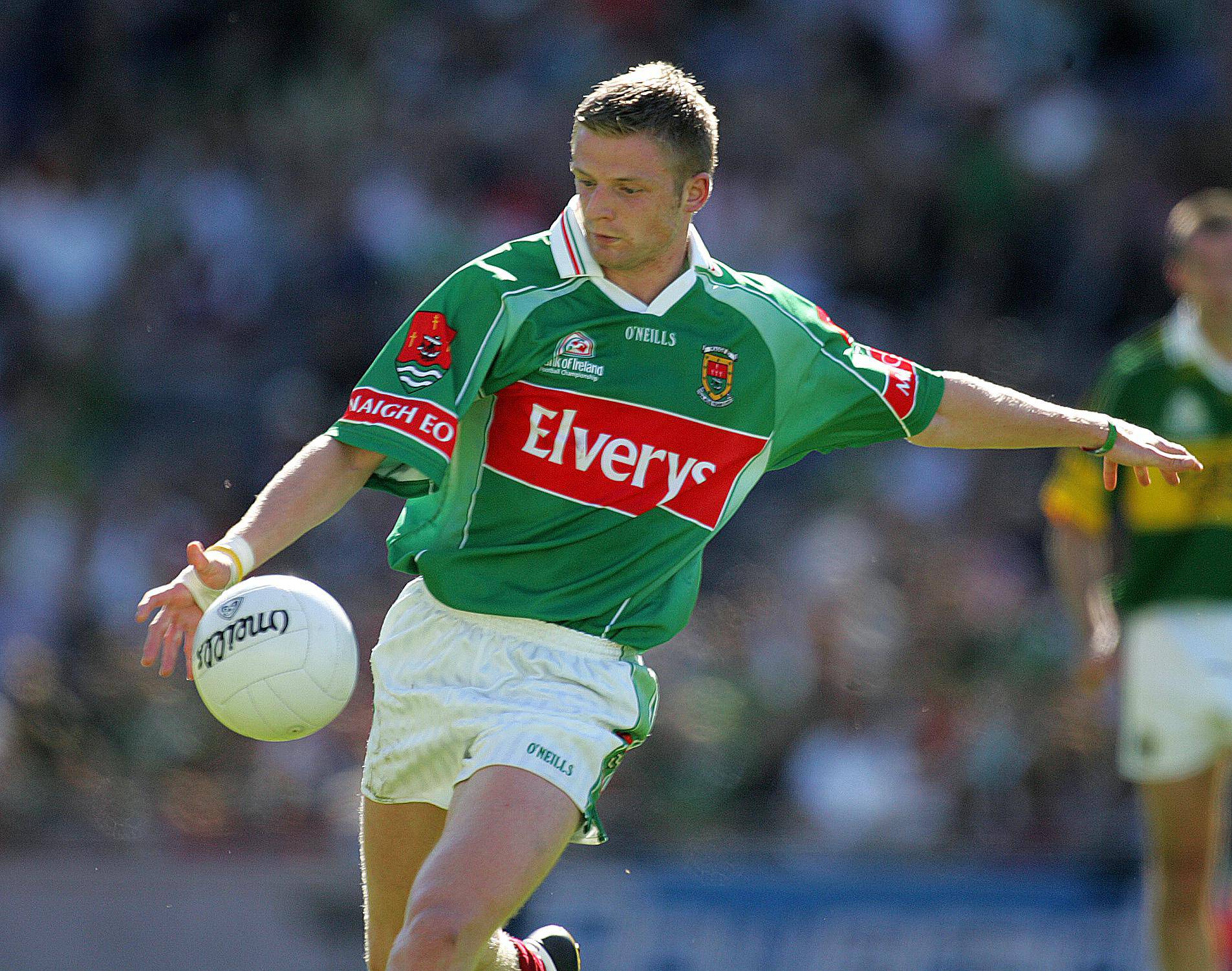 It may have been only his second time to start a championship match for Mayo but Louisburgh’s Austin O’Malley impressed enough to be named Man of the Match when scoring five points from play against Kerry in the 2005 quarter-final. Picture: INPHO/Lorraine O’Sullivan

It’s slightly surprising, given the frequency with which both counties have knocked around the latter stages of the All-Ireland series over the last two decades, that this Sunday’s encounter at Croke Park will be just the second time that Mayo and Kerry have met at the All-Ireland quarter-final stage.
The sides have clashed multiple times in finals (2004 and 2006) and semi-finals (2011, 2014 and 2017) but since the advent of the qualifiers in 2001, there has only been one quarter-final meeting. That was 17 years ago, in 2005, a game and a year which have been lost to the collective memory to a certain extent, falling as they did between the two stools of heavy All-Ireland final defeats for Mayo.
But there are some striking similarities between the 2005 version of Mayo and this year’s team. Both had lost the previous year’s All-Ireland final. Both were under the guidance of a manager in the fourth year of his second stint in charge (2005 would prove John Maughan’s final season in charge of his native county).
Both exited the Connacht championship at the hands of Galway, although the 2005 version made it as far as the provincial final, losing by 0-10 to 0-8 in Salthill. And both had duly come through the qualifiers without looking especially convincing: the Mayo of 2005 defeated Cavan by 0-11 to 0-8 in the Hyde in a game which had precious little to distinguish it.
That’s probably a bit harsh. That game in Roscommon does have one significant footnote. It featured the first championship start of a dynamic corner-forward from Louisburgh by the name of Austin O’Malley.
O’Malley, then aged 25, had been on the Mayo radar for a while at this point. He had played some FBD way back in 2000 but he had to wait until 2004 for a proper opportunity. He made his league debut against Fermanagh that February and his championship debut off the bench in New York in May, scoring 1-3 in a Mayo rout after coming in for Brian Maloney.
He subsequently came off the bench in the Connacht final win over Roscommon, the All-Ireland quarter-final win over Tyrone and the semi-final replay win over Fermanagh but didn’t get a run in the All-Ireland loss to Kerry. Nor did he see game-time in the following year’s Connacht championship. But after Mayo lost that game in Pearse Stadium, Maughan decided his forward line needed some shaking up.
“I had been disappointed not to feature in the Connacht championship, especially in the final, because it was a tight game and I remember sitting there on the bench thinking ‘I could make an impact here,’” said O’Malley this week. “I got the call for the Cavan game and did fairly well.”
Three points from play on his first championship start, to be precise. And it meant he was right in the mix for the quarter-final against the newly-minted Munster champions, at Croke Park a week later.
“I remember we didn’t name a team until the morning of the Kerry game, which would have been quite unusual for us. We got the train up the morning of the game as well, which would also have been a bit unusual,” recalled O’Malley.
“I remember feeling very relaxed before the game. I would have been quite focused and prepared for what I was being asked to do. I would have had my homework done on the Kerry defenders, they had Marc Ó Sé, Mike McCarthy and Tom O’Sullivan back there, so I was ready for what was waiting for me out there.”
Take a quick look back at the Kerry team that day if you get the chance. They’re all there. Three Ó Sés, a couple of O’Sullivans, Cooper, Mike Frank, late-vintage Seamus Moynihan at centre-back. Players like Paul Gavin, Kieran Donaghy and Eamon Fitzmaurice coming in off the bench. More All-Stars and Footballers of the Year than you would want to count.
But Mayo stood up to them. There were only three points in it at the final whistle (Kerry 2-15, Mayo 0-18) and while it might be a bit generous to say Mayo should have won it, they certainly came much closer than they did in the All-Ireland finals of the preceding or succeeding years. 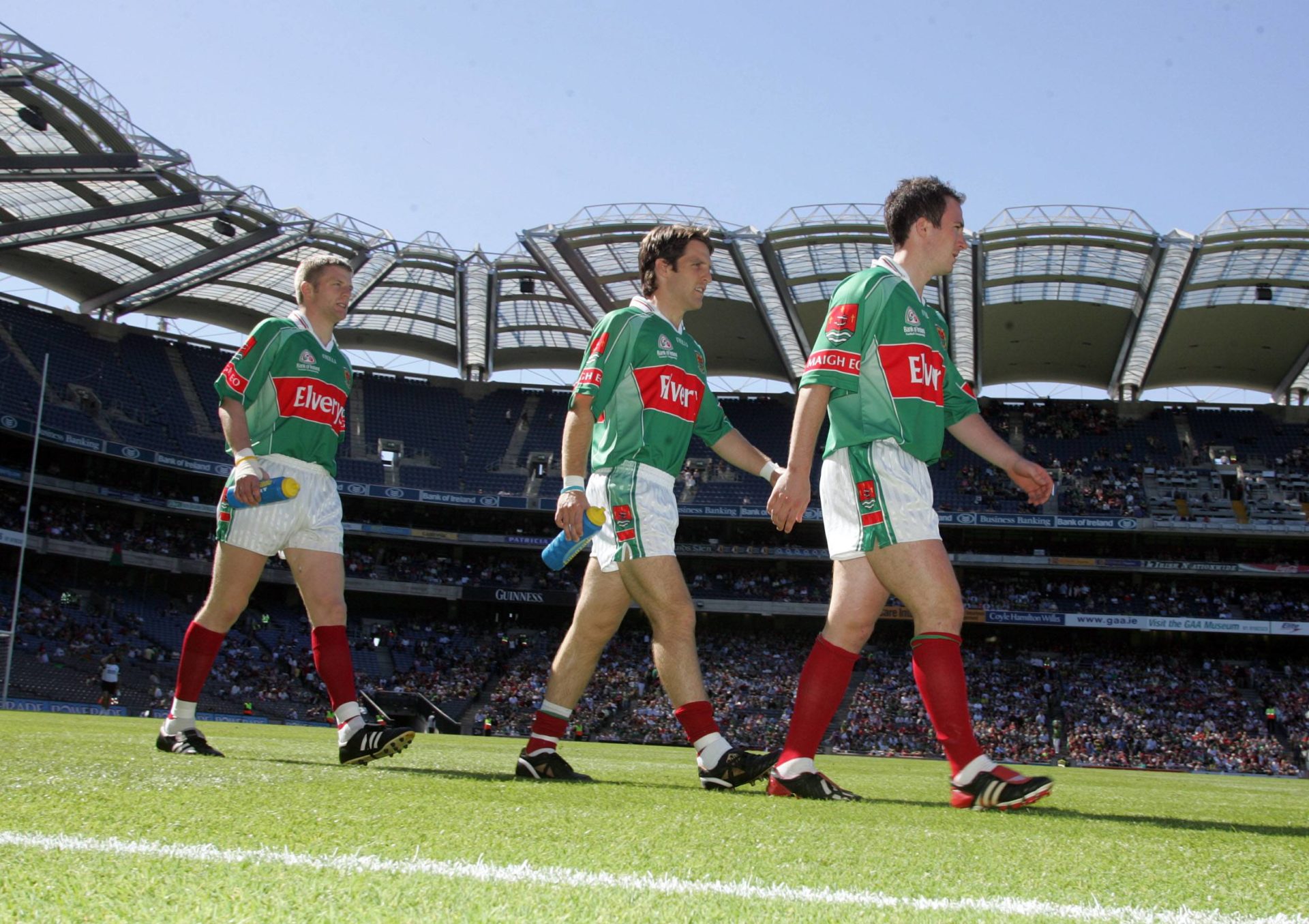 “It was a roasting hot day in Croke Park and a very open game,” said Austin O’Malley. “Both sides were willing to open up a bit and attack. We actually played really well on the day, we were in the game right the way until the end really. Obviously the All-Ireland the previous year had gone badly, they had given us a bit of a hiding, so maybe there was an element of us wanting to atone for that a little bit. But we stood up to them well all over the pitch, I felt. Nobody got cleaned.
“For myself, I would still have been disappointed not to feature in the All-Ireland the previous year so I suppose I felt I had a point to prove. It was one of those days where you just feel confident and tuned in to what you’re doing. I remember Marc Ó Sé picking me up first, and then after maybe half an hour Jack (O’Connor, the then, as now, Kerry manager) called for Tom O’Sullivan to switch across. I think Aidan O’Mahoney would have come back to pick me up for a while later on too.”
O’Malley, making just his second-ever championship start against one of the most vaunted defensive units ever assembled in Gaelic football, was superb on the day. He kicked five points from play and was named Man of the Match despite Mayo having lost. When defenders like Marc Ó Sé and Tom O’Sullivan are being switched off you, you know something is going well.
“We had changed things up a bit; the attack hadn’t functioned very well against Cavan, I think we only kicked eleven points, so we went with a new system against Kerry with myself and Ciaran Mc left alone inside,” continued O’Malley.
“I remember there being loads of space and I was able to get my hands on plenty of ball. Things just clicked for me on the day.
“A couple of turning points probably stand out for me. The first was Gooch’s goal, he finished it really well over David Clarke.
“The second was Darragh Ó Sé’s goal early in the second half. It was a ball in that just slipped away from Jimmy Nallen and Ó Sé literally fly-hacked it in.
“That was a massive opportunity for us. Kerry went on to beat Cork in the semi-final and Tyrone caught them in the final, but we would have felt that there was an opportunity there for us if we had been able to get over Kerry that day.
“I think sometimes it is overlooked a bit, it’s sort of sandwiched in there between 2004 and 2006. But we had a very good team in 2005.”
It’s a very valid point; there’s a reasonable argument to be made that the 2005 team was a superior outfit to the one which lost to Kerry in the All-Ireland the following year. McDonald played some of the best football of his career that year. Alan Dillon was nearing his prime. The defensive spine of David Clarke, David Heaney, James Nallen and Ronan McGarrity was as good as you’d find anywhere, bar perhaps Kerry.
And just have a look at the five substitutes Mayo brought on that day: Aidan Kilcoyne, Keith Higgins, James Gill, Conor Mortimer and Andy Moran. James Horan would love to have that sort of firepower sitting behind him this weekend.
“I remember Shane Fitzmaurice having a great game that day. Kerry would have had Ó Sé and William Kirby in midfield, a seriously strong partnership, but Shane and Ronan McGarrity definitely held their own,” said O’Malley, before noting another player who made his first championship start against Kerry on that warm afternoon 17 years ago and went on to have a long career in Green and Red: a 20-year-old Barry Moran, who kicked a point from the half-forward line.
“Barry came in, a young fella full of energy, probably with not very much pressure on him that day and he played really well,” said O’Malley of his fellow fresh face.
17 years on, as the counties prepare to lock horns at the quarter-final stage once again, Mayo supporters will no doubt be hoping that the similarities between the two seasons stop short of producing the same result.