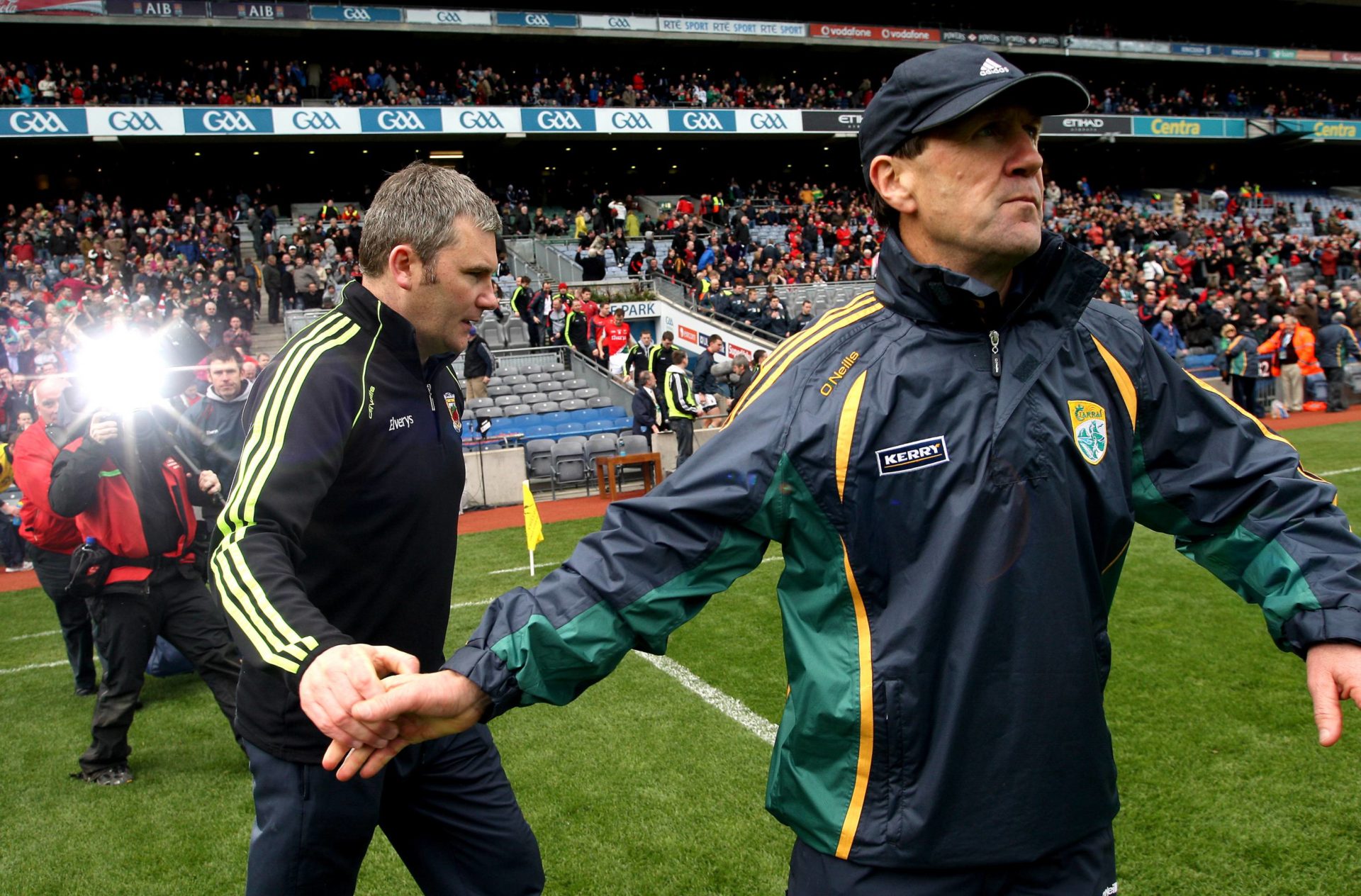 Managers James Horan and Jack O’Connor shake hands after Mayo’s extra-time victory over Kerry in the 2012 Allianz Football League Division 1 semi-final. Ten years later the two managers are back gearing up their teams for a crunch showdown in the race for Sam Maguire. Picture: INPHO/Ryan Byrne

Leaving Cert students sat their Business Studies paper last week. One of my abiding memories from Leaving Cert business was a lesson on the difference between strategy and tactics. Loosely defined, a strategy identifies broader decisions to be taken over the long-term, while tactics are the specific actions which help an organisation achieve in the here and now. That lesson in Ms. Quigley’s class got me thinking about James Horan’s reign as Mayo manager.

Although sometimes questioned by the general public as a tactician, I’ve always thought that James Horan is a brilliant strategist. In his two four-year spells in charge of Mayo, he has put systems and structures in place to facilitate the development of a squad filled with athletic and talented footballers. He has created pathways for promising underage and club players to develop physically, mentally and technically and has always taken a long-term overview of proceedings. His squads are filled with highly athletic, powerful men who have pace and power. Horan has identified players with particular characteristics and introduced them to the high-performance Mayo senior set-up early so that they could become another cog in his powerful machine.

As the leader of a high-functioning system, the Ballintubber man is obsessed with high-quality processes and structures. This probably comes from his career as a Process Quality Assurance Manager with Coca-Cola in Ballina as he has applied the same principles to the management of his football team. When he took over as Mayo manager in 2010, I remember attending a skills audit in Ballintubber Community Centre on a dark and dreary November morning. Each player in the squad was scored on their ability to execute the basic skills of Gaelic football i.e. soloing off both feet, hand passing off either hand, pick-ups, catches, etc.

Simple stuff but it was clear from the outset that our new manager wanted brilliant basics. At each station was a monitor, a quality assurance manager if you like, who would mark your technique on a scorecard. It was almost like a production line in a factory. I would imagine that similar processes and analysis took place at last November’s Senior Combine in the Dome in Bekan. With Horan’s fascination with perfecting the fundamentals, it is little wonder that all his teams are tidy and efficient around the park with good ball and movement skills.

In another instance of where Horan’s business ideals married with his football ones, he used to invite pre-eminent businessmen into camp after championship exits to conduct end-of-season reviews. I was a member of the squad in his early years when, at season’s end, he recruited former Allergan Managing Director, Pat O’Donnell, to come in and facilitate a player-led evaluation of our season. Horan removed himself from the room as the business executive helped us assess our individual and collective performances and identify ways to improve going forward.

As a deep-thinking strategist, another of Horan’s great traits is his innovation when looking for ways to improve and keep things fresh. It’s a much-hackneyed cliché but the Ballintubber man is good at thinking outside the box. Some will say that he is a stubborn man who doesn’t listen to his lieutenants but there is no doubt that he is good at putting a high-quality management structure in place to ensure that his players have the best of everything. Over the years, Horan has enlisted the help of top operators in their fields such as Cian O’Neill, Donie Buckley, Kieran Shannon, Seán Moffatt, Ed Coughlan, Ruth Kilcawley, Conor Finn, Martin McIntyre etc. He is also not afraid to shake up his management team and make some hard calls if he feels it has gone stale or is not best in class.

What’s more, he has also been creative and made some left-field moves when trying to add professionalism to his playing roster. Gavin Duffy was drafted into the squad just after retiring from Connaught Rugby. Alan Murphy joined the panel shortly after finishing his soccer career with Galway United. Michael Schlingermann came onboard in 2019 after a career as a League of Ireland goalkeeper. Eoghan McLaughlin became a fully signed-up member of the Mayo senior panel before he could even think about pursuing a professional cycling career. Horan has always been open to the cross-pollination of ideas from other professional sporting spheres. Born in New Zealand, he is a known rugby aficionado and we’ve all seen the photos of him and former England Head Coach, Stuart Lancaster, chewing the fat while watching Leinster Rugby train in Dublin. In many ways, Horan’s title of ‘Mayo manager’ is probably a misnomer and given his strategic mindset and modus operandi, ‘Director of Football’ may be more apt.

But alas, some people wonder if Horan is a strategic mastermind who is tactically weak. In terms of style of play, Pep has ‘tiki-taka’, Klopp has ‘gegenpressing’ and Mayo’s approach has become known as ‘Horanball’. Although this way of playing has turned Mayo into perennial challengers and the GAA’s great entertainers, the term has taken on more negative connotations for Mayo fans. ‘Horanball’ has almost become a byword for a gung-ho, tactically naïve approach. Maybe it’s because of the lack of ultimate success but I think it is unfair to view ‘Horanball’ as a flawed football philosophy. For me, it is a game-plan that is positive, hard-working, energetic, exciting and ensures a high win percentage. Granted, it probably lacks the tactical nuances of Stephen Rochford’s reign where we saw Alan Dillon magically appear in a deep-lying play-making role for the Tyrone All-Ireland quarter-final in 2016 or Aidan O’Shea stationed at full-back to mark Kieran Donaghy in 2017. Horan, however, has more championship wins and Connacht and NFL titles than any other Mayo manager so it is hard to argue with that. If you could combine Rochford and Horan’s two footballing ideologies, you’d have a sure-fire winner.

Whatever about the merits of Horan’s tactical nous in years gone by, he’ll need the game of his life on the sideline on Sunday. Tactics, of course, aren’t worth a button if the players themselves do not perform between the white lines in the heat of battle but you’d have to imagine that the Mayo management will need to devise something special to slay the All-Ireland champions in waiting. I am no tactical genius, and James Horan knows infinitely more about setting up a team for victory than me, so I won’t be pontificating ad nauseum here. I do know, however, that Mayo cannot approach Sunday’s match as they did the league final by hoping to beat the Kingdom in an open, flowing encounter. 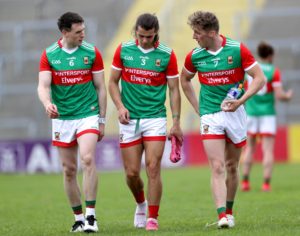 Paddy Durcan, Oisin Mullin and Eoghan McLaughlin will have a job on their hands to contain the Kerry forwards on Sunday.

This Mayo team are not in their pomp right now and are not in the fettle or fitness to go toe-to-toe with the best team in the land as they did against Dublin in 2016 and 2017. Defensively, Mayo need to find a way to close space, block channels and stop runners from deep as we did none of those things in April’s NFL decider. Paddy Durcan and Oisín Mullin did not feature in that match and their return will provide some much-needed legs as we try to curb Kerry’s speed merchants and strike runners from deep. James Horan also needs to select as much pace in the forward-line as possible if we are to break down their rearguard’s parsimonious new style.

As regards match-ups, I wouldn’t get too hung up on that. You can put Keegan or O’Hora on David Clifford but that still leaves a host of other lethal players like O’Shea, Paudie Clifford, Moynihan, Geaney, Spillane, O’Brien and White who need tracking. Rearranging deck chairs on the Titanic comes to mind. One-on-one individual marking will be a feature of the game but what’s much more important is that Mayo formulate a system and structure to stay compact, tight and miserly.

Do the Mayo management have the time or will to change the habits of a lifetime and implement such a system at this stage of the campaign? It’s exam season and Mayo and James Horan face one hell of a test this weekend.