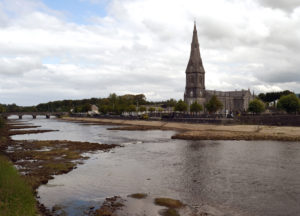 One of Ballina’s biggest tourism assets is under threat from algae, according to a local councillor.

Cllr Annie May Reape has asked Mayo Co Council to evaluate the current levels of pollution on the River Moy and take steps to alleviate large amounts of algae bloom being experienced this season.

Cllr Reape said the Moy was of the utmost importance to the region from an ecological and economic point of view and the council could not allow it to deteriorate in any way.

“I spoke to some Scottish fishermen who had problems with algae bloom in their homeland and so they came here to do their fishing. Unfortunately, they came to Ballina and had the same problem,” she said.

“There has been a horrible smell in the town as a result of this in the past few days. We won’t have fishermen staying if they are getting algae on their hook,” he said.

Cllr Michael Loftus said he was also concerned about the state of the Moy.

“I’m not sure what is in the river at the moment but it doesn’t give me a good feeling in my tummy. Some 130 bales [of silage] washed in during the big floods in 2016 and there was a spill of diesel that had to be sectioned off two years ago and cleaned up. Humans are the cause of a lot of the river’s problems.”