Solutions urgently required if Mayo are to conquer the Kingdom

We knew going into last weekend’s qualifier with Kildare that it was likely to be a difficult game for us but more than just hoping for a victory, we were also hoping for something tactically different with an eye towards the quarter-finals and the inevitable step-up in class. 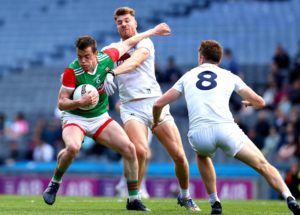 We had hoped for a solid defensive set-up and that there would be a variety to our offensive play other than the running game where the shortcomings of this approach were ruthlessly exposed in our last All-Ireland and National League final defeats and in this summer’s Connacht championship defeat to Galway.
We were hoping that a focus might be placed on a kicking game with the attack having a focal point that would allow the team to mix up its approach. We had hoped for too much.
What we got was more of the same with slow movement of the ball from defence to attack, loads of lateral passing, players taking the ball into contact and being turned over and some poor wides.
Kildare are an average team who attempted to take remedial action following their routing by Dublin in the Leinster final. They played with two sweepers protecting the D. It was basic yet sufficient for long periods to stifle the Mayo attack. They were also quicker at moving the ball forward and utilised the kicking game much more than Mayo.
There was no evidence that we have learnt to cope with a blanket defence and once again it fell to a number of our defenders to bail us out, with Oisin Mullin, Lee Keegan and Eoghan McLaughlin contributing one goal and four points to our overall score.
While that might be good enough to save your bacon against a team of Kildare’s standard, what’s going to happen on the day our defenders are tied up doing their primary jobs of marking the opposition forwards? Or the day that their forward runs are checked by opposition players who can match their athletic ability, as happened in both last year’s All-Ireland final and this year’s National League final? This has been a worry for a considerable period of time but there is little evidence any solutions have been found as we prepare to enter the business end of the season.
Kerry, who we are drawn to play next, and all top teams have a variety to their play and focus as much as possible on kicking the ball in order to deliver it to the danger area as quickly as possible, thus denying the opposition sufficient time to get set-up defensively. In situations where they cannot get the ball forward quickly and the blanket is set-up against them, they have a focal point to their attack, be it aerial or alternatively, dynamic movement at full-forward to beat the blanket. Armagh were excellent at this last weekend, the best example delivered after only nine seconds when Rian O’Neill won the throw-in and launched his free on top of Rory Grugan who caught, turned and unleashed a cracking shot into the top corner of the Donegal net.
Mayo badly need that same sort of option in front of the opposition’s goal. Jack Carney has proven in each of the last two games that he can catch some massive balls but he doesn’t spend long enough in there and when he does, we don’t kick the ball in often enough. There is, in my opinion, an alternative option to Carney to play that sort of role, but more about that anon.
I must say, the Mayo team as picked for last Saturday surprised me, with Stephen Coen, Aidan O’Shea and Jason Doherty all included in the middle eight. Jason has been a fantastic servant to Mayo football and his massive contribution in key games over the years has often been underestimated. However, he is 34 this year and is only back playing football after a two-year absence following two cruciate ligament injuries. It was a big ask to expect him to meet the intensity and pace required for championship football in this vital sector in the wide expanses of Croke Park. Likewise, Aidan O’Shea. The evidence was there last year that Aidan no longer had the mobility and engine to play in the middle of the field. You could maybe understand him being utilised in this area in MacHale Park but it is now unfair to expect him to function at the level required at GAA headquarters.

Stephen Coen probably had his best game for Mayo marking Stephen O’Neill in last year’s All-Ireland final at full-back. This year he is being deployed predominately at centre-half-back where his lack of pace has been exposed. Those three factors combined to see Kildare dominate the middle of the field, where Kevin Feeley had the freedom of Croke Park, and consequently they were able to move the ball forward quickly. While pressure was being applied by a number of Mayo players high up the pitch, it was uncoordinated which allowed Kildare to easily bypass that press and get some decent ball to their inside lines. They were also playing at a higher intensity which forced Mayo into uncharacteristic mistakes and allowed the Lilywhites to lead by three points at half-time.
Jack Carney was the only starting forward who contributed a point from play to our first-half total of 0-5, with the remaining scores coming from Eoghan McLaughlin, two, Lee Keegan and a free by Cillian O’Connor. It was much of the same at the start of the second-half as Kildare raced into a six points lead before Mayo got any real traction in the game with three points in succession.
Kildare still looked like they had the momentum until the 61st minute when Oisin Mullin, surrounded by three tacklers, somehow found a gap and played a one-two with Padraig O’Hora before lashing the ball to the net. This energised Mayo while sucking the momentum from Kildare who for the final ten minutes looked out on their feet. Points from Fergal Boland, Cillian O’Connor and Darren McHale and a last minute goal from Jordan Flynn saw Mayo over the line.
But where does that all leave us for the challenge of Kerry in the All-Ireland quarter-final? Are we confident that we have a new defensive strategy or that we have any alternatives to the running game? There was no evidence to suggest so in the last three games but it’s my honest opinion that we are going to have to try something different against the Kingdom. If we don’t then it’s very difficult to see anything other than a Kerry win. 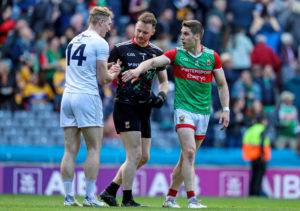 The alternative that I referenced earlier to using Jack Carney as a target – and which I would seriously consider – would be to play Mattie Ruane there. Mattie is playing poorly in the middle of the field at this moment in time. Why not try and utilise him at full-forward instead and put Carney to midfield? We’ve two big men who are both very good in the air. Or then there’s James Carr.
Every time the Ardagh man gets the ball he seems to be out on the wings and trying to run through the whole defence which against the top teams is impossible. Whoever it is, we need somebody on the edge of the square who gives us an alternative attacking option otherwise we’ll be going into the defining part of the season still doing all the same things yet expecting different results.
Whatever our plan of attack, I still think it’s safe to assume we’re not going to shoot the lights out against Kerry. That much would seem obvious based on the displays of our forwards against Galway, Monaghan and Kildare. So for us to have any chance, the first thing we’ll have to do is limit their scoring opportunities – which means we’ll need a defensive plan. But because there’s been no evidence of us having one this year, the unfortunate thing is we’d be trialling it against one of the favourites to win the All-Ireland.
If we can restrict Jack O’Connor’s team to what would be a realistic score-line on our part, well then we’re at least going to give ourselves a chance of matching them at the other end because there’s no way we’d win a straight shoot-out. Not with the likes of David Clifford lurking about.
We can’t afford to go man-to-man, we have to get bodies back and crowd out the space around Clifford and make sure that if we’re conceding possession that it’s out around the sidelines as opposed to in the centre. It’s all about limiting Clifford’s number of possessions but the unfortunate thing about Kerry is that they have so many other excellent shooters as well, so we have to make sure that whatever shots they take are outside the scoring D and are taken under severe pressure.

It sounds simple doesn’t it!