Classy fields assembled for the Think Big Half Marathon at the McGrath Launceston Running Festival in Tasmania, Australia last Sunday, and classiest of all was the brilliant Mayo woman Sinéad Diver. 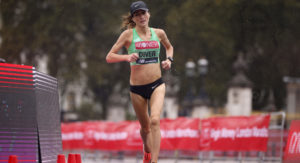 Sinead Diver will be representing Australia in the upcoming Commonwealth Games in the UK and has continued her preparations with an impressive win at the Launceston Running Festival.

The Belmullet native and Mayo AC member was using the Think Big Half Marathon as a final hit-out before she represents Australia in the upcoming Commonwealth Games. She was to have run against half-marathon course record holder Milly Clark (71:09 in 2021) but the Launceston local withdrew beforehand.

Race conditions were tough with a blustery 35kph wind and temperatures only 8°C, with Sinéad out on her own from the start to run an excellent even-paced race where she averaged 3:20 kilometres. She passed 14k in 49 minutes and went on to win easily, setting another course record over the longer distance in 71:03.

As race winner she collected two thousand dollars and added another one thousand for the new course record. Australia’s Brett Robinson won the men’s half in 61:57.

Sinéad had earlier raced in Japan’s Gifu Seiryu Half Marathon on April 24 – a scorching 69:00 performance en route to clinching second place, narrowly outside her 68:50 personal best from 2020. The winner was Kenya’s Dolphine Nyaboke Omare in 68:13.

The 21.1km effort saw Sinéad bounce back into form ahead of a big year on the international circuit. She was recently announced in the Australian team for the Commonwealth Games and saw the Launceston Half as a critical lead-in race to Birmingham. The Launceston Half was her last race in Australia before heading overseas for some altitude training in preparation for the Games.

The Commonweath Games marathon is on July 30 which will be the Mayo native’s next competitive race. She will be looking to emulate the form of her top-10 finish in Tokyo.