Tara Needham’s excellent last-ditch point earned Mayo a win by the narrowest of margins (0-16 to 2-9) over a dogged Cavan to book their place in the quarter-finals of the TG4 All-Ireland Senior Football Championship, writes Deniese O’Flaherty. 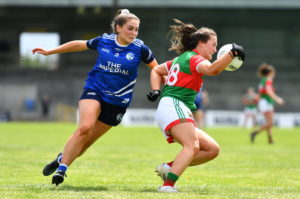 It was tough on Cavan, who staged a great comeback after being eight points down at the start of the second half in Glennon Brothers Pearse Park. They had levelled minutes from time through the superb Aisling Gilsenan but Needham struck at the end.

Mayo opened the scoring with a neat point from Shauna Howley in the second minute. Sinéad Greene got up in the eighth minute to score Cavan’s first point to close the gap to one, before Mayo replied with three in-a-row.

The gap was two, in the 22nd minute, when Gilsenan hit over a fine point. Mayo’s forwards put pressure on the Cavan kick-out and were able to stretch the Cavan defence. Points from Sinead Walsh, Needham, Sarah Mulvihill and an excellent effort from Lisa Cafferky saw Mayo extend their lead to six in the 27th minute.

Lauren McVeety scored a point from a free for Cavan but a fisted effort from Lisa Cafferky just before half-time restored Mayo’s six-point advantage.

The lead was eight in the 34th minute when Lisa Cafferky kicked over a free but within six minutes Cavan were back in the game. McVeety scored, then Gilsenan added a terrific point and one minute later set up Ally Cahill, and the Killygarry star scored a powerful shot to the net to cut the deficit to three points.

Mulvihill got a much-needed point for Mayo before Cavan grabbed their second goal; Gilsenan and Cahill combining again, with Cahill firing low to the net. The lead was now just one point. Three minutes later Gilsenan scored another lovely point to draw Cavan level for the first time. 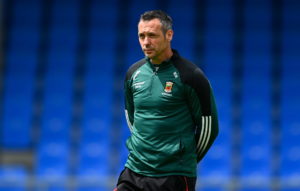 A Lisa Cafferky free edged Mayo back in front but Gilsenan drew her side level again. However, right at the end Needham scored to give Mayo a narrow win.