Supporters voted with their feet and for an hour of last Saturday’s All-Ireland Qualifier it looked as though the decision not to turn up had extended to the Mayo team. And then like a rabble of gate-crashers Horan’s boys burst in to spoil Kildare’s party.
Quarter-final bound, all’s well that ends well I suppose. 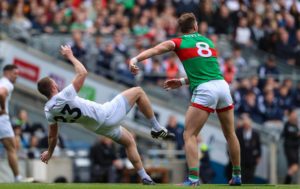 Aidan O’Shea pushes Neil Flynn of Kildare to the ground during Mayo’s victory over the Lilywhites at Croke Park. Picture: INPHO/Evan Treacy

If you believe that then you probably also believe it was just a slip of the mind that the stadium announcer didn’t tell us how many people had filed into Croke Park for this Round 2 double-header. Estimates placed the crowd at a maximum 15,000; Mayo and Kildare supporters would have exceeded that number on their own had some common-sense and plain old decency been shown by the suits last week.
“Is there a neutral ground between Newbridge and Castlebar that would fit Mayo and Kildare?” posed Larry McCarthy in a ridiculous and embarrassing defence by the GAA President of the decision that imposed maximum expense and inconvenience on fans by fixing the game for the furthest point due east of Mayo at 6pm on a Saturday evening. He received his answer in euro and cent.
But back to our great escapers.
Only five points scored and nearly 45-minutes played, there seemed the real prospect that Mayo supporters had already been treated to their only thrill of the day, that of watching Roscommon suffer a smash and grab defeat to Clare in the curtain-raiser. But thankfully there was still another big turnaround to come.
However, for all the excitement about — and praise for — the swashbuckling recovery, what shouldn’t be allowed to be forgotten is that in the second-half of this match Mayo trailed by six points to a team that itself had trailed Dublin by sixteen points in this year’s Leinster final. They were mightily fortunate it was only six points.
There is only so long any team can survive on fumes. Only so long the few can carry the majority. And it was worth asking again on Saturday, just where the heck would this Mayo team be if not for the brilliance of Lee Keegan? We all know where. Out of this year’s championship.
The same applies to Enda Hession for his inspirational block that prevented Mayo from slipping eight points behind the Lilywhites with 25-minutes to play. Had Daniel Flynn’s rasper reached the Mayo net, that surely would have been the Green and Red’s point of no return.
We were still three points behind with just under fifteen minutes left to play. It was then James Horan chose to replace Aidan O’Shea. Coincidence or not, Mayo outscored Kildare by 2-3 to 0-1 from there to full-time to again spark the debate about whether Mayo are a more dangerous proposition with or without the Breaffy man on the pitch. Horan’s quarter-final selection has all of a sudden become particularly intriguing, not least because asking Keegan and the rest of the defenders to do all the heavy lifting, conceding just the one goal in three championship matches and regularly outscoring their own starting forwards, is only going to be sustainable for so long.
After three championship outings against Galway, Monaghan and now Kildare, corner-back Keegan and wing-back Eoghan McLaughlin are Mayo’s joint top-scorers from play with four points apiece. At this stage of the campaign McLaughlin should probably have had two or three goals to his name as well, with Kildare ‘keeper Aaron O’Neill the latest to have his hands warmed by the Westport flier. The goals that full-back Oisin Mullin and substitute midfielder Jordan Flynn did strike on Saturday make them joint second-highest scorers from play, equal to the amount of points that Cillian O’Connor has contributed across all three games. And there are more sightings of the corncrake in Mayo than there are championship appearances for Fergal Boland under James Horan yet when the Aghamore man (to everyone’s amazement) was finally sprung from the bench for his first action of the summer, the two points he kicked from play within 22-minutes of each other are as much as Diarmuid O’Connor and James Carr have each managed in three consecutive starts.
The fact that management have used twelve attackers across the three games is an indicator of just how uncertain they are about what constitutes their strongest unit. They have just over one week now to decide upon their best six for the quarter-final. Horan picked Conor Loftus and Jason Doherty to start against Galway, dropped them for the game against Monaghan, recalled them for the Kildare game and whipped Doherty off before half-time with Loftus fortunate to have escaped a similar fate.
The availability of Ryan O’Donoghue for the next day would be a timely boost but whether the manager decides to stick or twist on some of the others and agrees that Boland and Darren McHale are perhaps now worth a punt, only time will tell. Similarly, there’s a difficult call brewing at the rear too. As much as the tide turned upon the impact of Boland and McHale in the final third of the pitch, Mayo were still four points in arrears when Padraig O’Hora replaced Stephen Coen at the heart of the Mayo defence. There’s a dynamism to O’Hora that Coen simply hasn’t displayed this season and which has resulted in the manager substituting his captain in two of the last three games, having done so several times in the league too. O’Hora was the player furthest forward for Mullin to trade passes with for the goal that drew Mayo level and the Ballina man’s energy was infectious, as the team managed to hold Kildare to one point for the final twenty minutes of the match. 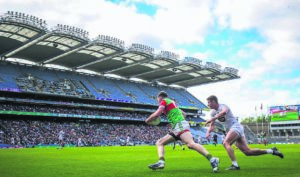 Could it be that Mayo start their quarter-final against Kerry with both their captain and, after Jordan Flynn’s explosive return from injury, last year’s captain O’Shea on the bench?
What is certain is that Mayo can ill afford another half of football so poor as what they offered during the opening 35-minutes at the soulless Croker last Saturday.
So heavily reliant on Paddy Durcan and Eoghan McLaughlin to try and punch holes in the mass defence of Kildare, and other players turning over the ball far too naïvely, when the shooting opportunities did arise the radars of so many were badly askew. An early missed free by Cillian O’Connor did nothing to settle any nerves, nor two from the boot of Rob Hennelly inside the opening twenty minutes. James Carr disappointed badly from a mark attempt, Jack Carney and Paddy Durcan snatched at two chances apiece from play and then there was that crack at goal by the marauding Eoghan McLaughlin who, for the second week in-a-row, made a hero of the goalkeeper by opting for power over precision. Nor were there many signs that things were about to improve after half-time when a slack Diarmuid O’Connor pass left it all too easy for Kildare to get a block on Boland’s kick for a point, or when O’Connor himself lashed the ball across the posts from way out right when the chance never really seemed on, or when McLaughlin’s stray handpass gifted the middle one of three consecutive Kildare points.
Eventually, Boland drove over Mayo’s first point of the half in the 44th minute which together with Hession’s wonder-block barely a minute later kickstarted a revival that has now left us among the last eight contenders. Still alive. Still kicking. Still doing it the hard way.
The Mayo way.