Has one goal ever typified Mayo football more?

“Never in doubt” was John Casey’s cheeky full-time declaration to the rest of the press pack in Level 7 of the Hogan Stand. The puff of the cheeks and the wipe of sweat from his brow gave the game away.
For 60 of the 70 minutes, this game was very much in doubt but, once more, Mayo found a way. 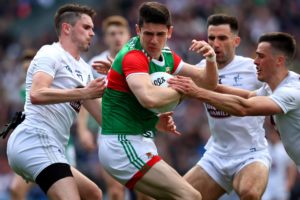 Last Saturday’s encounter against Kildare bore many similarities to the previous weekend’s struggle against Monaghan – another stodgy performance from the Green and Red, a few more favourable referee calls that saved our bacon and moments of scoring brilliance from defenders to rescue the day. But, all that being said, Mayo deserve huge credit for hanging in there when on the ropes and showing massive grit and determination to wrestle back control when a championship exit was looming large.
The first-half was woeful stuff from Mayo, as bad a championship showing as I can remember in the last decade. We were laborious, indecisive and devoid of any imagination. Up front, the forwards lacked sharpness and looked slow with no creative spark or intent.
With the exception of the marauding Eoghan McLaughlin, nobody was willing to take their man on and ask questions of the Kildare defence. Mayo resorted to speculative shots from outside of the scoring zone and only scored five from 16 efforts with six of those attempts not even reaching the goal.
Kildare, on the other hand, were playing quite well. There was a confidence and compactness to them and there was a marked change to their formation and structure from their Leinster final drubbing at the hands of Dublin. Their default setting for most of that first-half was fifteen men behind the ball whenever Mayo had possession. There was no way that they were going to let Mayo race into an early lead as Dublin had done.
In the opening exchanges, Kildare kept it tight and boxed clever and had they shown a little bit more adventure could have had Mayo in even more dire straits at half-time.
Needing to stem Kildare’s first-half flow, James Horan hooked Jason Doc before the half-hour mark. Doherty was unlucky that it was him who got the curly finger as any one of five or six could have been hauled ashore. Credit to Horan though as he saw that major surgery was required and he acted swiftly and decisively. All of Mayo’s subs made a positive contribution and Mayo unquestionably finished with a stronger 15 than that which started.
One of those subs, Fergal Boland, again left his mark on the game when introduced. After bagging seven points from play for Aghamore in the opening round of the club league the weekend before, management could not continue to ignore his scoring prowess. This once again shows the importance of releasing fringe players to their clubs mid-season. A game of competitive football at any level at all trumps a training session when trying to get up to match speed. And there is something warming and inspi 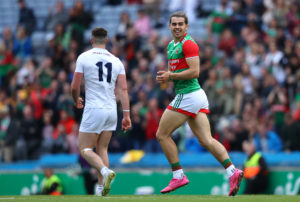 ring about starring for your club on your home pitch one weekend and then doing the same for your county in Croke Park six days later. Stuff like that can let every young club player dream and is what the GAA should be all about.
In the dying moments of the 1999 Champions League Final, ITV’s commentator Clive Tyldesley uttered the immortal words “Can Manchester United score? They always score!”. Every time I see Boland play, I think of that famous commentary as Fergal Boland also always scores. He may not look like your modern-day wing-forward who can run all day and is built like a brick outhouse but he knows where the posts are and will take some pressure off Cillian (and Mayo’s defenders!) to get points.
Kildare were 11 points to five up after 41 minutes and Mayo were flagging badly. The key moment in the match came shortly after that when Enda Hession made a fearless block on Daniel Flynn’s goal-bound shot. Had that gone in, it was curtains for Mayo. Even a point at that stage would have been another dagger blow for Mayo’s hopes. As it was, Mayo worked the ball up the field after Hession’s heroics, Cillian O’Connor snaffled a score and the comeback was on.
After that, the introductions of Darren McHale, Padraig O’Hora and Jordan Flynn gave Mayo the fuel to fire another barnstorming finish.
McHale added much-needed speed and dash to Mayo’s attack and for the second-week running kicked a nice score.
Shorn of Ryan O’Donoghue and Tommy Conroy, Mayo are really lacking electric pace up top. Croke Park is no place for slow men and the Mayo medical team will be working around the clock to get rapid ROD ready for the quarter-final.
O’Hora’s introduction allowed Mayo to push Oisín Mullin and Lee Keegan further forward and the pair became two of Mayo’s biggest attacking threats. I’m curious as to why O’Hora has fallen out of favour in recent weeks. Surely, it is not a fallout from the Clifford scutching in the league final. Clifford could do that to anyone and has done it to most who have tried to track him. What’s gone is gone and O’Hora must start the next day out as his positioning at No.3 helps free up Mullin and Keegan to play in their natural positions away from the full-back line.
What more can we say about another imperious Lee Keegan Croke Park display? I could simply copy and paste what I wrote about him in last week’s column as for the umpteenth time he stepped up when needed. His score with the outside of his weaker left boot from 45 metres in the second-half won’t be bettered in GAA HQ this year. That’s six championship games in-a-row now that he has split the posts from distance. Indeed, the forwards’ shooting has been much-maligned in recent times but the scores kicked in the second-half from Boland, Diarmuid O’Connor and Conor Loftus from under the Cusack Stand were all worldies. 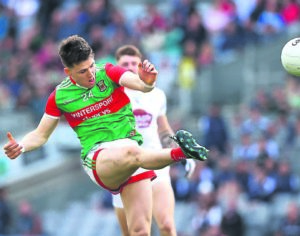 Fergal Boland showed his worth to Mayo when sprung from the bench against Kildare and scoring two points. Picture: INPHO/Bryan Keane

Oisín Mullin had a poor defensive display but that may be a blessing in disguise for Mayo. He has looked uncomfortable under the high ball for a while now and that could be the catalyst for management to station him further out the field where he is much more at home.
His goal was brilliant but was there ever a goal that typified Mayo football more than that? A one-two between Mayo’s corner-back and full-back inside their opponents 21 to bail out a misfiring attack.
Kildare also contributed to their own downfall. Glenn Ryan made a big call to replace the solid Mark Donnellan with the greener Aaron O’Neill. It spectacularly backfired as O’Neill did not cover himself in glory for either goal and was well and truly rattled by Mayo’s kick-out press in the second-half.

Daniel Flynn is a talented, mercurial player who can mix the brilliant with the awful and he should have had much more to show for his afternoon’s work than a solitary point. He was symptomatic of Kildare’s general display as they did not translate their on-field dominance to the scoreboard last Saturday evening.
They can rightly feel aggrieved at some of Derek O’Mahony’s calls, particularly the Ben McCormack pick-up when the game was in the melting pot, but the game was there for the taking and they did not grasp the nettle. Even their impressive and dominant midfield duo of Kevin Feely and Kevin O’Callaghan ran out of steam on the home stretch.
All things considered, Kildare will be rueing a missed opportunity as once again Mayo escaped to victory. Brinkmanship but the bandwagon keeps rolling…