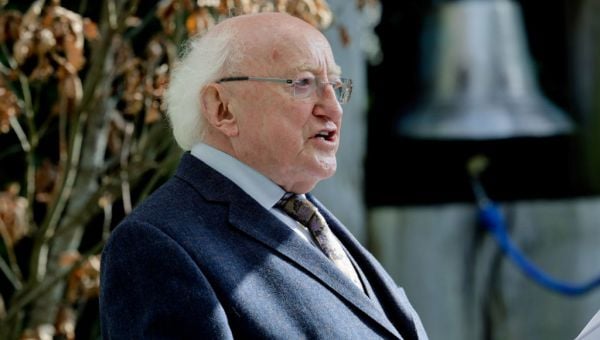 Opposition parties have rallied behind remarks made by President Michael D Higgins who described Ireland’s housing crisis as “our great, great failure”.

On Tuesday, Mr Higgins described housing as a “social disaster”, adding that it was no longer a crisis, but “a disaster”.

Labour leader Ivana Bacik said it was “no wonder” that Mr Higgins described the housing situation as a disaster.

@PresidentIRL has given voice to the reality of the ongoing housing disaster. He called out the failures of successive Govts. Above all he spoke out for those who are suffering now. Our first citizen spoke for all of us. Rather than attacking him Govt should listen. Carefully.

“It’s no wonder that he’s referring to failures in government policy and it’s deeply concerning in this context to see kite flying from members of government about tax cuts being the priority, rather than the priority of spending on housing, on child care and public services, our schools and our hospitals,” Ms Bacik added.

People Before Profit TD Richard Boyd Barrett said that the President has called the Government to account on its housing policy.

“As if we needed reminding, the president of this country had to come out and call you to account for what he described, absolutely rightly, as the great, great failure of this government and this Republic to deal with the housing disaster that you are presiding over,” Mr Barrett added.

“When he referred to the poor law system that we thought we’d left behind us as still being present, he was obviously referring to what is truly embarrassing the fact that we have 10,000 families and households and individuals and children in emergency accommodation, a situation that has got worse and worse month after month.”

Sinn Féin TD Pearse Doherty said that from the people in the street to the highest office, the housing crisis has been “called out for the disaster and social catastrophe that it is”.

He said that the housing crisis has been “profoundly damaging” to the aspirations of an entire generation.

“The truth is being spoken in a powerful way and the cynical government efforts to shut down and shut up those standing up for the people is disgraceful,” Mr Doherty added.

“The housing crisis is a decade of shame for Fine Gael and for Fianna Fáil, that has defined life in Ireland for far too long.

“House prices have soared beyond the reach of ordinary workers and families. Homelessness has returned to pre pandemic levels with over 10,000 people and emergency accommodation.”

He accused Fine Gael and Fianna Fáil of turning housing into a “cash cow” for private interests.

Minister for Finance Paschal Donohoe said he accepts the crisis is a challenge that the government must rise to and make progress on.

He said that their efforts are showing “clear signs” of an improving housing supply.

“It is only with more homes being built, that we have the ability over time to see rents change and to see us make progress on affordability,” Mr Donohoe added.

“All of us except the need to make more progress here in government.

“We understand the anxiety, the stress, the difficulty, that this is causing to households, to homes all over our country,” Mr Donohoe added.

Meanwhile, Tánaiste Leo Varadkar said he agreed with some of the remarks made by Mr Higgins.

Mr Varadkar said: “The President is somebody who’s always been and often outspoken in his views because he’s the President, he’s above politics, above party politics and is immune in many ways of criticism and scrutiny so I’m not going to be critical of him in any way.

“I think some of what he said was true quite frankly.

“The housing crisis is a disaster for a lot of people.

“For the 60 per cent or 70 per cent of us who own our own homes whether it’s outright or through a mortgage, that’s not the case.

“But for people who are paying very high rents, often half their income in rents, that’s a disaster, and it is a fact that in Ireland at the moment, very often you know, a couple both of whom have decent jobs are unable to afford a home and that wasn’t the case for most of our history.

“To me that’s a social disaster, people who are working hard to have decent incomes can’t afford to buy a home and many are so frustrated at that, they’re even willing to turn to populism and nationalism and euroscepticism as a solution and in that scenario they may lose their job as well as their house, but that is a disaster in my view.

“We’re responsible for solving it.

“I don’t think we’re responsible for the construction bubble and the housing crash and all of the things that happened.

“Part of the reason why we have the housing crisis that we have is because 12 years ago we had a housing bubble, a banking and construction collapse and I certainly wasn’t responsible for that.

“We are responsible for fixing the problem.

“Criticism and describing a problem is one thing, but coming up with solutions and operationalising them is another.”

“President Higgins states what is blatantly obvious and gives a reason for it, that over the last 15 to 20 years successive governments have relegated responsibility for housing to the private sector, and he gets attacked by the very parties who implemented those policies,” he said.

“Instead of listening to him and asking themselves what can they do, they attack him.”

Thousands without power as thunderstorms sweep across Ireland