Pat Holmes: Lilywhites have the potential to hurt Mayo 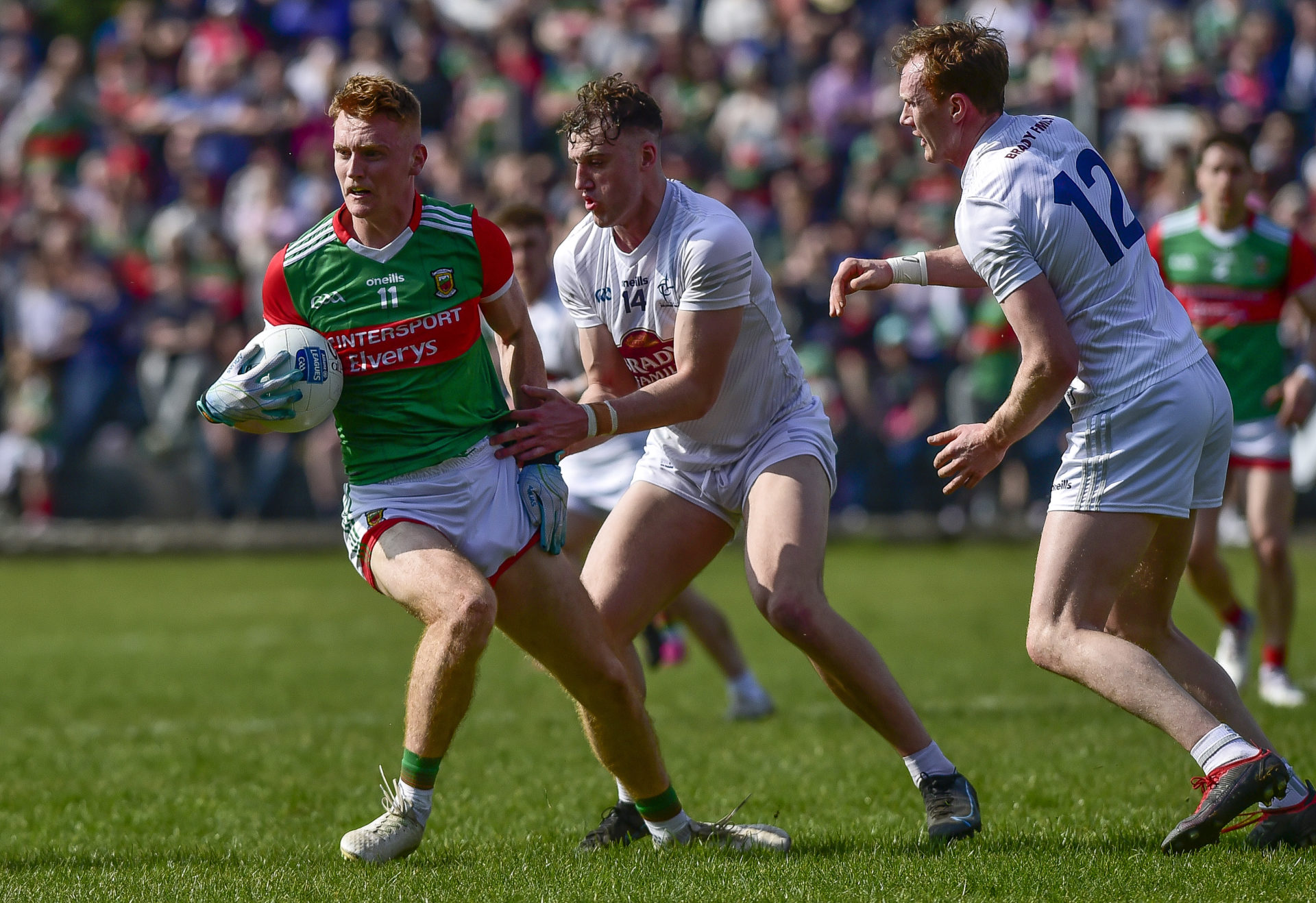 Mayo’s Jack Carney in action against Darragh Kirwan of Kildare during the National League Division 1 meeting between the counties in Carrick in March. Picture: INPHO/Conor McKeown

It was more in hope than in confidence that we headed from Westport to Castlebar for Saturday’s must-win encounter with Monaghan.

Our exit from the Connacht championship at the hands of Galway, coupled with the uncertainty of what impact a six-week layoff may have, meant no one was quite sure what to expect in terms of the performance or the outcome.

The traffic was light, parking was secured easily and we had just left the car when the Mayo team bus passed by, after making the exact same journey from their Westport base.

Accompanied by three Garda motorbikes and a Garda car, my ten-year-old son enquired why the Mayo team needed such a high level of security – I struggled to answer that one.

Ultimately, the hope and expectation was that there would be an improvement in the team’s performance from the Galway encounter, specifically that there would be a variety to just the running game and that this would be sufficient to see Mayo into the next round – and augur well for when we’d hopefully meet the top teams further down the line.

We got the win, which ultimately was the primary objective, and there was evidence of some variation with more emphasis on kicking the ball, but definitely not enough to have anyone scrambling to book the Burlington for July.

Monaghan were quicker out of the blocks with two points from Gary Mohan. Their movement was good and their passing was crisp and with purpose.

There was little pressure being applied on the ball by Mayo which made it possible for the visitors to thread passes through to their inside forwards.

However, the tide significantly changed when Conor McManus received a black card for his trip on Aidan O’Shea. During the ten-minute period that Monaghan were reduced to fourteen, Mayo scored one goal and three points without reply.

The goal was from a penalty correctly awarded for a foot block by a Monaghan player on Oisin Mullin.

Mayo went in at half-time three points up but playing against the breeze for the second half, nothing was certain and doubts about the prospect of a Mayo victory still existed given they were struggling to deal with Jack McCarron, who had scored three points from centre half-forward.

Mayo got the first score of the second half but then went a full twenty minutes without raising a flag, which was very similar to what led to their downfall against Galway. In this period many of the players appeared reluctant to take on responsibility and as we have become accustomed to, it was a Mayo defender, Lee Keegan, who showed the bravery and composure to take on the responsibility of getting the scoreboard moving again.

Between there and the end, Mayo added a further four points but could not deliver a knockout blow to what was a limited Monaghan team who lacked pace.
Indeed if the referee Barry Cassidy had awarded a merited penalty to Monaghan in injury time when there was only three points between the teams, it is likely the game would have gone to extra-time with the outcome then being anyone’s guess.

The second-half fade-outs must concern the Mayo management and will no doubt receive attention.

But Mayo are still in the championship and will relish the next challenge of taking on a Kildare side whose confidence must be low following a heavy defeat to Dublin.

Obviously you’d expect us to carry some added fuel too, given the whole ‘Newbridge or Nowhere’ controversy of 2018 and Mayo’s subsequent exit from the All-Ireland race, but we’ll need to proceed with caution.

Of course, Mayo have to fancy their chances and truth be told, should be taking out a team of Kildare’s standing, but it’s no secret the Lilywhites have a handful of forwards whose quality is something we’d love to have in our own ranks.

And any team with quality forwards usually has a chance, just like how Jack McCarron was able to keep Monaghan within touching distance on Saturday.

If we flip that, it has to be a genuine concern that just seven Mayo points were scored from play against Monaghan, with only two of these coming from our starting six forwards.

As stated earlier, there was more emphasis on kicking but not enough in the areas that can really hurt an opposing team in a central position in the scoring area – this may in some way explain the poor return from our forwards.

We still have no focal point to our attack and our favoured tactic is still to carry the ball. Jack Carney was selected at full-forward but was used as part of a rotational system where often, if the ball was coming up one of the wings, he’d head off out the pitch and suck an opponent with him, with another Mayo player funnelling in from wing-forward into that zone.

What Mayo were trying to make happen, particularly in the second half, was for Monaghan to end up with different players at full-back in the hope of creating mismatches, and we saw Bryan Walsh and Aiden Orme in there just the same as Carney and Cillian O’Connor, but such constant rotation does not allow for one focal point upon which to construct an effective kicking game.

Luckily, Monaghan were a very average team and although getting plenty of bodies behind the ball, they rarely engaged the ball carrier which allowed Mayo to play the ball around and pick their passages through.

But we have learned in the past that the better teams will stop our runners and our scoring threats from deep. It happened most pointedly in last year’s All-Ireland final defeat to a Tyrone team who, actually, have since been found out as not being that good at all.

But on that occasion they had their homework done on how to stop Paddy Durcan, Mattie Ruane and Keegan et al, and Mayo then had very little else to offer in an attacking sense.

This is where the major concern still remains, even after last Saturday, and the hope would be that Ryan O’Donoghue is fit to have some involvement against Kildare, as his absence was hugely noticeable. We need his sort of dynamism up front.

For their part, just as they were when knocked out of Ulster by Derry, Tyrone were second best from start to finish against Armagh on Sunday, and their exit from the championship has only gone to confirm what so many Mayo supporters believed in the aftermath of last year’s final – that never before had we a better opportunity to lift Sam Maguire.

But they’re gone now – and we are not!

We have an opportunity to reach this year’s quarter-finals at least, and will be expected to do so. But expectation has not always sat well on our shoulders when faced by so-called weaker opposition.

It’s when we impose our high-intensity, high-octane, chaotic style that opposition teams struggle most against us – but it’s usually only the strongest teams that draw that sort of approach from us. Kildare are a running team with nothing to lose and have to come out with all guns blazing so if we’re not at full tilt, we could struggle.

But I still expect us to win.