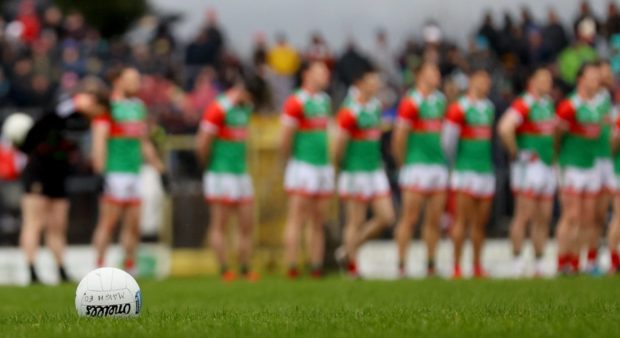 This weekend’s clash against Monaghan puts this Mayo side back into a place where their finest hour has so often come about; their backs are right up against the wall and the firing squad is armed and loaded.

It is understood that many men have already been wounded but a recent press conference did not really clear that issue up. So and so should be available. Michael Plunkett is not. The starting 15 was a remarkable sight when it made its appearance yesterday and it will be even more exotic with sudden changes in the minutes before the throw-in, such is modern GAA.

In addition to this, a defeat could spell disaster for James Horan. Given the failures on the big occasion in 2020 and 2021 and again on National Football League Final day and against Galway this year, the Monaghan game carries with it a certain sense that it may be coming to the end of his second tenure as Mayo manager. From speaking to Mayo supporters, the ‘end of days’ atmosphere that encircled and followed Stephen Rochford’s team to Newbridge in 2018 has crept up again, ever haunting in the background since last September.

If Mayo are to lose to Monaghan, the nature of the defeat will decide if things are to get apocalyptic for James Horan. Go out fighting and lose by the odd point, there may be life in the old dog yet but go out whimpering and lifeless and the ravens may well be leaving the tower.

With all of this stacked up against them, Mayo are really in that unknown territory where they and so many other sporting organisations have thrived. Where preparation meets a form of structural chaos so profound it could bring down the walls of the Colosseum.

One of history’s most recent examples would be when the Los Angeles Rams laid claim to the Superbowl earlier this year with several injuries to star men such as Odell Beckham Jr and Darrell Henderson along the way to their win over the Bengals on the big day, or the middle of the night as it was in this time zone.

In this case, some plucky rookies stepped up to fill the void and though it was not exactly the Miracle on Ice in terms of the qualifications of those players, it was still impressive to see the sheer determination and courage from those on the fringe unveil itself on such a massive occasion.

Similarly, when Chelsea lifted the Champions League in 2012, they came into that game against Bayern Munich, in the Bavarian’s backyard at the Allianz Arena, missing the likes of John Terry and Branislav Ivanovic and Ramires. Left back Ryan Bertrand made his first start in Europe playing out of position as a left winger and he was still part of the massive effort to not only survive the onslaught but also win that game on penalties.

Of course, it could go the other way when you find yourself in this jam. It is easy for the body and the brain to let you down, giving in to the knocks and the bruises. They call it “kicking you while you are down” and it hurts knowing what you could have achieved if so and so was available. It does make, however, for a handy excuse in the press briefing, should you partake, after the game.

Mayo have so often found themselves with their backs against the wall, quite recently against Dublin in the All-Ireland semi-final last year and before that against Galway. See also, the 2019 League Final, Donegal in the League this year, the drawn game with Kerry in 2014 and many further citations.

This underdog mentality has served Mayo with diligence over the years. Mayo have often gone into games as the overdog and at some point, throughout that game, whether it is because they receive a black or red card, they go through a barren patch in front of the posts or just have a awful performance, they metamorphose into the underdog. Then the mentality monster springs to life, burst forth from his cage with furious claws and gnashing teeth and the supporters are subject to one of these ‘blood and thunder’ comebacks that have become a hallmark under James Horan.

This writer’s overall argument here is that surely, by now, with three campaigns in the locker with this manager and this current squad, it is time to dump this notion that Mayo should be in anyway regarded as the underdogs, injuries be damned.

If you are a player on this current Mayo team, surely you will take umbrage with how casually pundits in the national media have been talking about Monaghan’s prospects in Castlebar. Monaghan are a wickedly good Division 1 team, mainstays of the top level going on for seven or eight years and they deserve massive respect. Just look at their league campaign. You turn those two draws into wins and they would have been in the final against Kerry.

But they are walking into Mayo’s backyard. The cynical side will shout out that Mayo has a mixed record at Hastings Insurance Brokers MacHale Park but they have never actually lost an outright All-Ireland Championship game at MacHale Park. Seven games, seven wins. Roscommon 2002, Cavan 2007, Fermanagh and Kildare 2016, Derry 2017, Armagh in Round 3 and Donegal in the Super 8s in 2019.

This is the home of one of the best teams in the country and Mayo need to make that distinction clear. Again, massive respect to Monaghan but the last time they got a sniff of the heights to where Mayo have continuously climbed, W.T. Cosgrave was Taoiseach.

For better or worse, Mayo contested the last two All-Ireland finals. Not an awful lot has changed since either one of those games. A heap of players retired but not many of them, aside from David Clarke, played beyond the fringes of the starting 15 from the start of 2020 onwards. The drive and the passion to win for their county should be well instilled by the management into a group of mostly young players by this point.

Come 4pm on Saturday, the mentality monster needs to be uncaged and not left shaking at the bars until the hour mark or the 67th minute.

It really is the only solution to getting past Monaghan in this Round 1 qualifier. Minute one, no fear, handbrake down and do not stop working until they are sent packing back to the Farney County, shell-shocked as well as beaten. Send out the statement that Mayo have not gone away.

It is time for Mayo to step up and be a Billy Big Bollocks about their status as a GAA team in this country. Mayo do not belong in Round 1 of the qualifiers. Their business is elsewhere, further down the line in this competition and it is time to play like it, even with a team like Monaghan in the way. Saturday night’s alright for fighting but let’s not do that. Let’s just go out and win.