A firm favourite with Mayo supporters, Padraig O’Hora talks football just the way he plays it, with a devil-may-care attitude, writes Anthony Hennigan.

By his own admission Padraig O’Hora’s career as an underage Mayo footballer wasn’t what you’d call illustrious. The statistics support his case: played two, lost two. But he goes even further. Picked for minor and under-21 teams that lost their opening championship games to Roscommon in 2011 and 2014, O’Hora reckons he was doing well to even start. 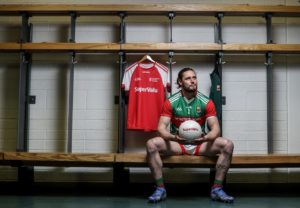 “That’s the way I’d put it.
“I was okay obviously that I was on the team but I wasn’t outstanding in any way, shape or form.”
The truth or otherwise, the Ballina man is the only one of the 2011 minors likely to play in Saturday’s All-Ireland Championship clash with Monaghan. The only other candidate is Conor O’Shea. In fact, there’ll still be more of the senior team that beat Galway 1-12 to 1-6 on June 6, 2011 potentially on show this Saturday (Aidan O’Shea, Cillian O’Connor, Kevin McLoughlin, Jason Doherty and Robert Hennelly) than O’Hora’s minor team that lost 3-8 to 1-8 to the Rossies that same day. If only we knew the decade of adventures that awaited. Innocent times.

It was never a case that Swanee was hell-bent on becoming a Mayo senior footballer. If it happened, it happened. And for a long, long time it looked like it never would. Indeed some of his old minor teammates had already retired from club football by the time Padraig O’Hora eventually debuted for James Horan’s team in 2020, thrown in to start against Donegal in the opening round of the National Football League – a game that ended in stalemate thanks to James Durcan’s last gasp goal for the visitors to Ballybofey.
“I suppose I had a weird old route in comparison to most. I stepped away from football for two years prior to coming in. I went back to hobbies, like martial arts, hiking, climbing, stuff like that, and came back to the club scene, had a really strong season and got a chance with James.”
He joined the panel fresh from RTÉ’s Ultimate Hell Week, where competitors took on an array of physical and mental challenges used by the Irish Army to select its elite Ranger Wing. 90% of soldiers fail, O’Hora reached the last three. A pre-season with Mayo was a doddle in comparison.
“[It was] kind of like a perfect storm I suppose. I had done a good bit of training, a good bit of new stuff, opened myself up to a few different bits — meditation, mindfulness. I did a lot more flexibility work, yoga, martial arts, and kind of came in fresh into football with a clear head and no expectations. It just went from there really, it kind of snowballed, I just went week by week.”
Turning 27 was a help, too, believes the social care assistant with Western Care.
“I came into the senior set-up a little bit older than most and probably needed it to be honest, the bit of maturity. It’s a great place to go and grow, we’re fortunate in the sense we’ve got incredible footballers there, really good characters, and it’s a great place to learn and develop your game because you can learn from guys who have been there and done it. I was maybe just at the right age to take on those learnings and apply them.”
But lest you think O’Hora is a deep thinker about his football, the reality, he assures, is quite the opposite. The rights or wrongs of the Mayo management asking the full-back to go man-on-man with the country’s hottest forward, David Clifford, in this season’s Division 1 final at Croke Park were pored over by an entire football community but not by the player himself.
“A one-on-one battle is what it is, it was what it was, it’s not the end of the world,” reflects O’Hora about a duel that came under the spotlight not only for the 1-6 that Clifford scored from play but for some off-the-ball interactions between the pair that were caught on camera. Any fallout was like water off a duck’s back to the Mayo man.
“If I had behaved in a manner that I was upset by or disappointed in myself by, it would have had an impact on me. But other people’s opinions or perspectives, who weren’t on the field, don’t influence me too much. I take my criticism from the team and my friends and family, outside of that, honestly, other people’s opinions don’t really seep into my thinking.”
It goes without saying though, that Mayo are in the midst of a very poor run of form and results. Another defeat to All-Ireland champions Tyrone in the penultimate round of the league, that fifteen points trouncing by Kerry in the final and a third straight home defeat to Galway in the championship are the backdrop to the Green and Red attempting to get their season back on track against Monaghan next weekend. They might have lost by just the one point to the Tribesmen but Mayo looked out of sorts for long, long stretches of that match. So what was it that went wrong? 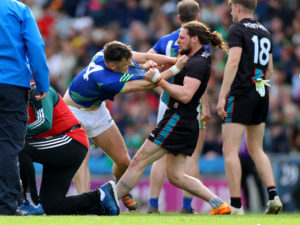 Padraig O’Hora in a tussle with David Clifford of Kerry during the Allianz Football League Division 1 final in Croke Park earlier this year. Picture: INPHO/James Crombie

“I’m quite bad in the sense that I don’t really analyse games,” admits Padraig O’Hora, his reasoning quite simply that what’s done is done, what’s won is won. Or lost, as was the case for Mayo.
“There’s a little bit of learning I suppose. I just think they played better on the day, in very simple terms. I think they came with the right attitude and they took a well-deserved victory. Such is life. We move on and just try and improve the performance for the next time around.
“You know when you’ve performed well, you know when you haven’t, you know when you’ve made mistakes and I suppose you can take them on and learn from them but on a personal level I don’t see the value in over-evaluating.”
But if the experience of marking David Clifford or losing to Galway really doesn’t cause him sleepless nights, then the arrival of a third child to the O’Hora household surely will. Padraig and his partner Roisin welcomed Sadie into the world just a couple of weeks ago, a baby sister for Caiden and Mila-Rae. If there are other fathers-of-three still playing senior inter-county then they’re certainly few and far between.
“First and foremost I have a very supportive partner, she takes on a lot for me. So do the rest of my family. I am fortunate in that sense. It’s not the conventional inter-county footballer, I’m sure it would be easier without kids in the house, but they inspire me,” explains London-born O’Hora.
“They do pay a certain price for it in fairness, certain things can’t be done or I can’t attend certain things because of training, but on the other side of it we’ve had some wonderful days out, some great times in Croke Park, good days and bad days, so at least they’re afforded the experience. I’m just grateful for their support really.”
He was 21 when becoming a father for the first time and describes the whole experience as a “bit of a whirlwind”.
“You think you’re grown up to some degree and then you realise fairly quickly that you’re not. I don’t think I started to mature until maybe 26 or 27 and I probably have a long way to go yet. But look, it was what it was, I’ve really enjoyed it and I’m very grateful to have children – a lot of people unfortunately can’t. They’re beautiful kids, they’re happy, they’re healthy and they inspire me and drive me on.”
Whether they’ll get another day out in Croke Park before summer is out remains the big unknown. There’s no margin for error at this stage for Mayo. Beginning on Saturday, four straight victories will be required if they are to reach a third All-Ireland final in-a-row, something no Mayo team has ever done. Spinning the positive, the only thing last month’s Connacht championship exit has done for Mayo is change their route, says O’Hora.
“It’s just a different way to get to the same targets that we’d have set at the start of the year. Nothing has changed within the group, we’re just training hard. It has given us an opportunity these past few weeks to get boys back on the pitch so we’re in a far better position now than we were a few weeks ago, so it’s all good.”
But Padraig, has losing four of your last five games – Kerry, Tyrone, Kerry and Galway — not knocked the confidence of the squad?
“I don’t think that would play into the minds really of anybody. It’s fairly irrelevant,” he insists. “I didn’t even know that was the case until you said it.
“You can look at numbers whatever way you want but at the end of the day, a game of football is a game of football. We’re moving on, we’ll get ready for the next one and just trample on from there.”