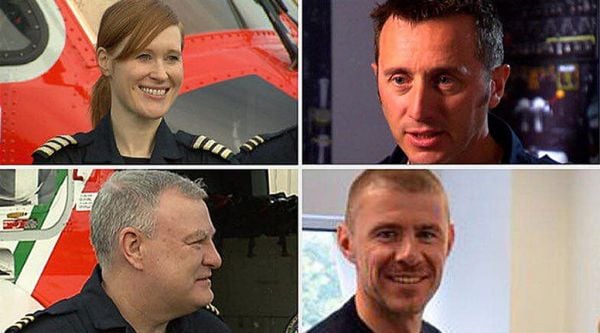 The sister of Rescue 116 pilot Captain Dara Fitzpatrick has said the conclusion of the inquest into the helicopter crash which claimed the life of her sibling represents the end of the “admin” of grief and now gives her space to deal with the emotional side of the process.

Niamh Fitzpatrick spoke to RTÉ Radio’s Morning Ireland after the conclusion of the inquest into the 2017 Rescue 116 helicopter crash, in which the jury returned verdicts of accidental death.

All four crew members onboard the helicopter were killed when it crashed into Blackrock Island, off the Mayo coast, on March 14th, 2017.

Ms Fitzpatrick, a trained psychologist, wrote a book about grief in the aftermath of the tragedy titled: ‘Tell me the Truth about Loss’.

With investigations or inquests into a person’s death, she said the admin of grief can get in the way of the emotional part of the process because it keeps you stuck in the harrowing detail.

“All the review board hearings and the inquest took me back a bit to the grappling place of grief. The psychologist in me understands that’s okay.

“I would say closure is not a word I would use. I would say the conclusion of investigations and inquests closes one chapter in grief, which is the admin chapter, but it makes space then for the emotional part of grieving because grieving has been paused and interrupted by all these investigations.

“Even though they are necessary, they get in the way of the emotional work you have to do has a griever,” Ms Fitzpatrick said.

“I feel as if I have done a PhD on life and a PhD on people and pain and hope. We can find that balance between remembering and living. My immediate family and extended family are such incredible people and our friends too,” she added.

Grief in any circumstance is difficult

“Grief in any circumstance is difficult, and grief when there is an inquest and investigations – and there were several investigations and two inquests – it is just gruelling.

“It is necessary, we need it. We need to know that this can never happen again, it is the safety of current crews and future crews, so it necessary, but it has been a very gruelling five years.”

“The jury were excellent. Such a difficult job for them but they took their time, they asked for clarifications, they gave it the consideration and respect it deserved, and you could see it meant so much to them to do that.

“It wasn’t an easy job because some of the evidence we heard was harrowing. It was very difficult to hear some of it, even though you know it beforehand, you have an idea what you are going to hear. Some details just hop out and it is quite emotional.

“My heart went out to the jury and to the witnesses, as well as the family members, but I think there is a relief in having that piece done with now.

“We know with grief how somebody died impacts on how we grieve. If you look at people through the pandemic who lost a loved one and weren’t able to say goodbye. All of those things have an impact.”

Ms Fitzpatrick admitted she found it very difficult to hear the statements from the Achill Island RNLI crew who recovered Dara from the water.

“It was very difficult to hear, but it is very necessary.

“Grief is very different for everybody. Some of us really need and want information and some don’t, and that is okay. But for me, while it is painful it is also helpful.

“I am a sister first. What psychology has done has made me understand some of the feelings that I have felt and continued to feel and maybe allowed me not to judge that, because grief is very confusing. It is bewildering, it is such a tough journey, it is exhausting.

“Anyone out there who is grieving and wondering why they are exhausted all the time, there is so much going on psychologically to process it.”

The bodies of Captain Fitzpatrick and Captain Mark Duffy were recovered in the aftermath of the incident. However, the bodies of winchman Ciaran Smith and winch operator Paul Ormsby were never recovered.