Mayo play a numbers game in search of winning formula

As ways to try and win an All-Ireland senior football title go, it’s quite the novel one. A player for every year you’ve been chasing Sam Maguire. Well, we’ve tried practically everything else at this stage. 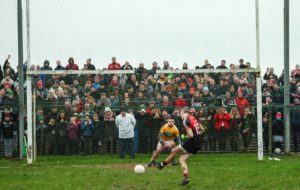 Evan Regan scores the winning penalty past goalkeeper Diarmuid McKiernan of Leitrim in the shoot-out that marked the opening game of Mayo’s 2019 season, an FBD League first-round victory in Carrick on Shannon. At least 14 of the 20 Mayo players used that day won’t even be in the squad for next Saturday’s championship clash with Monaghan. Picture: INPHO/James Crombie

It’s 71 years since Sean Flanagan and his teammates paraded the big silver chalice through the towns and villages of Mayo but eleven finals, thirteen if you include the replays, have come and gone with never the Mayo captain the one to scale the steps of the Hogan Stand. And 71 is the number of players James Horan has handed senior appearances to since his return as Mayo manager in 2019. A coincidence or an omen in this year’s mission of the Green and Red to end the drought? You’d be favouring the former over the latter at this stage, given they’re already sat in the Last Chance Saloon on the back of last month’s defeat to Galway in the Connacht quarter-final. Monaghan are the latest gunslingers who will come waltzing into Castlebar on Saturday.
59 of those 71 Mayo players have appeared in league or championship matches, the rest in the FBD League.
This investigation of the depths to which James Horan has gone in his attempt to find a championship-winning blend was sparked by statistics which appear in the 2022 GAA Media Guide, which was issued to the press in advance of this season’s football and hurling championships.
Courtesy of the Ferguson Archive we were told that 792 people had been bestowed the honour of playing senior championship football for Mayo. That number has increased by one since the appearance of Kilmeena’s Jack Carney off the bench against the Tribesmen during the one-point loss at MacHale Park. The Archive reckons 931 men have also appeared in the National Football League for Mayo but with the release of the statistics coming so close to the end of this year’s league campaign, whether that figure has taken into account the most recent debuts handed to Ballina’s Sam Callinan and Frank Irwin, or Donnacha McHugh of Castlebar Mitchels, I cannot be certain.
Nevertheless, nationally, it’s said that up to the beginning of this 2022 season 25,169 footballers have played senior inter-county championship and that 29,646 have played league. Dublin has the most players with championship appearances and Down has the least.
The Ferguson Archive is the result of a project that the GAA embarked upon late last year to provide an updated results and statistics archive for Gaelic games. Drawing upon the work of numerous individuals across the country who have preserved records on the Association’s behalf throughout its history at local and national level, the statistics project was given a significant boost when it received the co-operation of Sligo’s Pádraig Ferguson who, since the 1980s, has been assembling his GAA statistics database and has been making his work known on the GAA Lore platform. It’s the intention of the GAA to house the archive on its soon to be redeveloped website later this year.
The archive also tells us that former Mayo star Andy Moran ranks at sixth in the list of all-time championship appearances, one short of fifth-placed Colm ‘Gooch’ Cooper of Kerry but 27 games short of former Dublin goalkeeper Stephen Cluxton whose 111 appearances is 22 more than second on the list, Tyrone’s Sean Cavanagh. Incredibly, the three Ó Sé brothers from Kerry, Tomás, Marc and Darragh, rank third, fourth and seventh respectively. But two other lists are headed by a Mayo footballer – and a current one at that. It’s common knowledge at this stage, of course, that no player in the history of the senior inter-county football championship has scored as much as Cillian O’Connor, however, what is also confirmed by the Ferguson Archive is that the Ballintubber maestro has also scored more goals than any other player to have gone before, his 30 squeezing the Kerry pair of Mikey Sheehy (29) and Colm Cooper (23) into second and third place respectively.
But back to those 71 men who have worn the Green and Red jersey since Horan’s second coming in 2019. There’s an irony surely that for all the players used, supporters have never been as unsure heading into any championship match over the course of the past four seasons as to what the starting Mayo 15 will be for Saturday’s All-Ireland SFC Round 1 Qualifier against Monaghan. So how about a little quiz instead?
Take a look at the full list of 71 players below and see then how you fare with the following questions.

Q:
1. Who are the only two players on the list to have played championship football for Mayo but not National League?
2. Who scored a goal on his National League debut in 2019 and appeared in six of Mayo’s first seven games that year, but has played no further matches since?
3. In 2019, who scored on both his league and championship debuts, and against Kerry in both Croke Park and Killarney, made a total of eleven appearances that year but has not featured for Mayo since?
4. This All-Ireland U21 winner replaced Paddy Durcan, Chris Barrett, Stephen Coen, Keith Higgins and Colm Boyle in five consecutive championship games in 2019 but has never been handed a championship start by James Horan. Who is he? 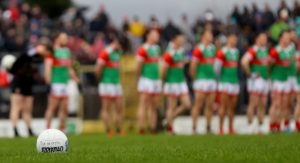 71 players have worn the green and red of the Mayo senior football team since James Horan’s return as manager in 2019. Some have appeared in only one game, others have been almost ever-presents. Picture: INPHO/James Crombie