There’s no place for Ryan O’Donoghue in the Mayo team for Saturday’s crunch All-Ireland Championship clash with Monaghan. 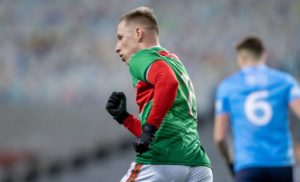 Mayo will be without the services of Ryan O’Donoghue for their make or break game against Monaghan this Saturday.

The Belmullet man has succumbed to the groin injury he sustained after Mayo’s Connacht SFC exit to Galway and the Western People understands he has been omitted from the match-day 26 entirely for the game against the Farney men.

Manager James Horan has wielded the axe, making no fewer than seven changes to the team that lost by one point to the Tribesmen.

Goalkeeper Rob Hennelly replaces Rory Byrne, returning from an injury that laid him low at the midpoint of the Allianz Football League. Paddy Durcan has been out of action for just as long and too makes a welcome return to a defence that also sees Enda Hession given a start, with the injured Michael Plunkett and Padraig O’Hora making way. Oisin Mullin has recovered from the hamstring injury sustained against Galway and is named at full-back

Three more personnel changes have been made in the attack with another long-term injury absentee Bryan Walsh named at wing-forward and Aiden Orme and Jack Carney also getting the nod in place of O’Donoghue, Conor Loftus and Jason Doherty.

James Carr and Cillian O’Connor retain their places with Diarmuid O’Connor selected on the wing.

The Western People understands that Jordan Flynn will feature on the substitutes bench, having recovered from a foot injury picked up in this season’s Allianz Football League final, with the Knockmore pair of Kevin McLoughlin and Darren McHale, Padraig O’Hora, Conor Loftus, Jason Doherty, Fergal Boland, Conor O’Shea, Donnacha McHugh, Rory Brickenden and Rory Byrne also among the subs.