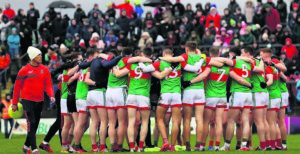 The Mayo team enter their pre-match huddle before this year’s NFL Round 1 meeting with Donegal in a rainy Markievicz Park. Picture: INPHO/James Crombie

By Aonghus Ó Maicín
When the Jiayu Pass along the Great Wall of China was constructed six-and-a-half centuries ago, the planning was left in the hands of a man by the name of Yi Kaizhan, an architect with a peerless reputation for attention to detail.
The level of precision he put into planning was clear from the outset of the project. After he was approached prior to the commencement of construction, he was asked about what materials would be required. And Yi Kaizhan didn’t deal in estimates or predictions. He unhesitatingly told the supervisor overseeing the project that 99,999 bricks would be required – no more, no less.
Yet, the supervisor, either a stickler for efficiency or just a plain old sadist, informed the architect that if he miscalculated his shopping list by even a brick his workers would be sentenced to three years of hard labour. The architect nevertheless stood by his estimate and 99,999 bricks were duly delivered for the construction of the new Ming dynasty fortress.
Following the project’s completion an out-of-place red brick was spotted along a ledge atop one of the fortress’s gates. One can only imagine a callously gleeful supervisor learning of the supposed miscalculation and, true to his word, he prepared to dish out the promised punishment to the workers. But Yi Kaizhan intervened, explaining that the brick was in fact a necessary feature of the construction. It was placed in its position by a supernatural being to fix the wall, he said. Had the brick been removed, he insisted, the entire fortress would have toppled.
So, the brick stayed where it was, the construction workers escaped hard labour and tourists continue to visit the location in northern China today to see the untouched red brick in all its glory. It’s difficult not to get the whiff of a modern All-Ireland-winning manager off the Yi Kaizhan legend. For the likes of John Kiely and Jim Gavin have proven in recent years that you need to summon the spirit of the ancient Chinese architect if success is to be attained in the white heat of summer.
Nothing can be left to chance. Every kick and strike across the championship is calculated. Every tackle and hook is anticipated. Every spur of the moment decision is made with deadly efficiency and is rarely regretted.
Had Yi Kaizhan been born into modern Irish society, he wouldn’t be dealing with convoluted planning bureaucracy. He’d most likely be manning the sideline in Croke Park on All-Ireland final day.
Meddling in chaos, as spectacularly appetising as it is to the eye, hasn’t reaped the same dividends in recent times. Mayo have always relished that side of the game, dragging opponents into the maelstrom and hoping they surf in on the tide after 70 minutes of pandemonium.
Anything can happen with the men from the West: a midfielder-cum-forward like Aidan O’Shea could be deployed at full-back, the best goalkeeper in the county’s history could be dropped for an All-Ireland final replay, match-ups could be miscalculated and defenders could be left to be roasted for entire games.
But they could also fight back from a six-point deficit to beat a team that hadn’t been conquered in the championship for seven years. Nothing, absolutely nothing, is off the table when Mayo is involved. And as a neutral you couldn’t but have an affinity for this ever-mercurial approach to the game.
But the question remains: Will anarchy ever get the westerners over the line? As every year passes, that line drifts further away, fading all the while. From the little evidence we have of the man, Mayo minor manager Sean Deane seems to be wired a little differently. There’s a hint of Gavin or Kiely about him, though it’s perhaps ludicrously early in his inter-county career to be drawing such comparisons. It’s a little unfair, too. He’s only in his second season in the job, and his first season consisted of one game amid a pandemic that put a severe strain on training and preparation.
He was less than six months into his role when Roscommon were happy to take Mayo out of the championship before they could build up any steam last summer. Since then though, he hasn’t put a step wrong: with an impressive backroom team at his disposal he’s already led his group of young men on a flawless round-robin Connacht championship campaign, and all inclinations suggest they won’t be easily overcome in the provincial final at the beginning of June.
With James Horan’s second stint as the county’s senior boss likely coming to an end before the end of the year, and Maurice Sheridan’s year fizzling out prematurely with the under-20 squad, Deane is positioning himself nicely for a crack at the big job sooner than he may have anticipated when he first took the minor gig at the beginning of 2021.
Deane would no doubt dismiss such hasty links should they be put to him. Having arrived into his current role from the well-regarded county’s academy structures, with two decades of coaching with Breaffy GAA club also under his belt, he’s continuously stated that player development is his primary focus. 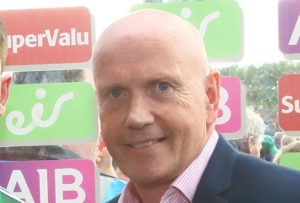 Sean Deane has quietly gone about his business as manager of the Mayo U17 team who will play Galway in next Monday night’s Connacht final.

“It’s all about development,” he told local media after he was announced as the Mayo under-17 manager. “That’s the reason I went for it really, to help and support the development of players right across the county.”
But avoiding the lure of the biggest job in Mayo football is like throwing your nose up at the prettiest girl in the disco. Still, these are decisions to be taken at the kitchen table in the dead of night during the autumn.
And the carrot may never come to be dangled in front of him either. By then Ray Dempsey may have led Knockmore to a third county title and will rightly be expecting a call from the county board.
For now though, the Kiltane native appears to be favourite for the most coveted and pressurised job in the county.
Mayo is in need of a factory reset, and of all the obvious candidates on the table at the moment, Deane seems to be the one best placed to carry it out.