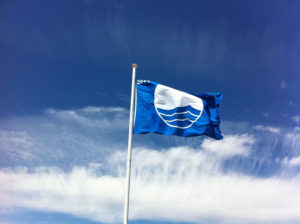 Mayo is on track to recover its two lost Blue Flag beaches, it has been revealed to members of Mayo County Council.

The news was broken at a recent meeting of the Westport-Belmullet municipal district in a presentation by the Head of Environment, Climate Change, & Agriculture Martin Keating.

Mr Keating said that his department’s priority is to regain recently lost beaches Carrowmore and Clare Island, and potentially add Old Head to Mayo’s collection. The latter received an excellent result when it was tested last year, but he revealed that the Blue Flag organisation grade beaches on a four-year period. Carrowmore and Clare Island received elevated samples when tested recently, and he is more optimistic for the year ahead.

He believes the pollution on the beaches is diffuse and that dog fouling, run off from agricultural land and human activity is the main cause.

He was delighted that the municipal district has provided an extra €50,000 to go towards beaches for 2022 and said that along with addressing the Blue Flags issue, they will look to improve disabled access at beaches and deal with the treatment of water from outdoor toilets there.

He has seen other local authorities abandon their beaches because they were deemed too hard to bring up to Blue Flag standard, but he maintains that Mayo Co Council are fully committed to tackling the issue. He even praised the amount of work they have put into the islands like Clare Island and Inisturk.

Westport-based Independent councillor Christy Hyland said that it is critical for the county to regain the lost Blue Flags.