Since being recruited by North Melbourne as a rookie in 2019, Gilroy has played 28 games for the club as a defender. 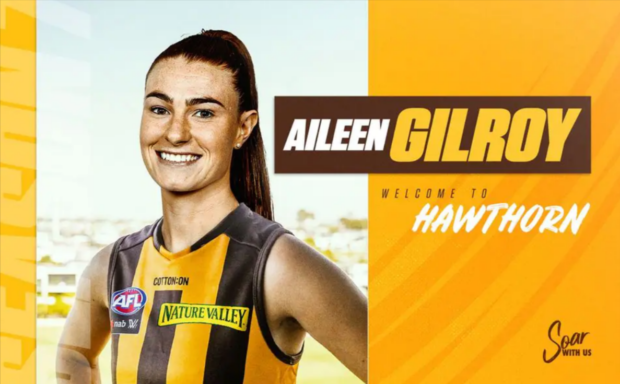 The Killala native took her game to new heights in AFLW Season Six, finishing seventh in the Kangaroos’ best and fairest after averaging 12 disposals and playing every game.

Hawthorn has signed Aileen Gilroy from North Melbourne, just weeks after the Irish star had told the Kangas she would recommit for the upcoming season. More on @AFLcomau.

“Aileen is one of the premier defenders in the AFLW and we’re thrilled to have her in the brown and gold in Season Seven,” Cashion said.

“She has grown in leaps and bounds since entering the competition as a rookie in 2019 and we can’t wait to see her continue to develop her game under Bec Goddard’s leadership.

“The standards and expectations Aileen provides will be really important to the growth of our group.”

“‘Gilly’s’ contribution to our program has been significant over her three years with us,” AFLW Football Performance and Talent Manager Rhys Harwood said.

“She became a much-loved member of our team, both on and off the field. Her never-say-die attitude on field has been a hallmark of her game, and her ability to develop into an important cog of our backline was a credit to her work-rate and attitude, since the moment she arrived.

“Whilst it’s disappointing to lose Gilly, we understand the nature of the AFLW expansion environment means players are faced with incredibly tough decisions.

“Gilly will always be a North Melbourne person. Everyone at the club wishes her well in her next chapter.”