Where fits Mr and Mrs Horse in an ever-changing GAA?

By John Cuffe
Change in sport never comes unannounced. It creeps in, it has that look of ‘the other’ about it initially. It settles like perfectly poured concrete, creating a break with what went before. The past is another country. Comparing modern Gaelic football with the 1960s version is like looking at two entirely different games. It’s natural that as a river flows, it carves out new channels.
The last few weeks, to me at least, have seen the GAA world move beyond the toddler steps of professionalism into more upright strides. The advent of the Tailteann Cup is more significant than currently imagined. The format is not set in stone. It will change next year. But change has started without the foot-dragging that has often beset the GAA. 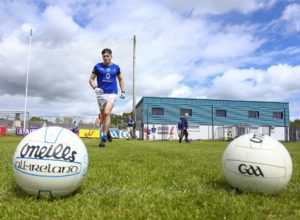 Wicklow’s Jack Treacy takes to the field at Aughrim on Saturday ahead of his county’s clash with Waterford, the first game in the newly-introduced Tailteann Cup. Picture: INPHO/Ken Sutton

The successful amputation of half the counties from sitting at the same table and supping from the Sam Maguire is some achievement. Of course, it came at a price. The cursed provincial tentacles still ensnare this version, but this is the MK1 version we are looking at; sooner rather than later, the MK2 version will render the provincial hand-break obsolete.
Mayo were knocked out in the first round of the Connacht Championship this year, meaning a six-week wait and possible elimination entirely after their next game. It’s not on for the bean counters in Croke Park. Big earners like Mayo and Tyrone earn.
So why, this week, do I see sea changes in the GAA? Many bits of straw and wisps of hay make up a bird’s nest. Much feathering of the nest has been done. The concepts of volunteerism and amateurism have been unpicked carefully over the last few months. The GPA battle over its players’ training expenses, successful by the way, has been by withdrawing Sean O’Countyman from uttering a few banal ‘isms’ into a recording device or TV camera.
The concept of the GAA family and the “all in this together” was parked. Sean wouldn’t utter the usual non-committal words to the great unwashed because the GPA had him as a bargaining chip. It worked. Meanwhile, Joe Horse swept out the dressing room for the Junior B match the following Sunday, trained the under-10s and marked the pitch with lime. For nothing. Rotha mór an tsaol.
On the subject of interviews by players to the media, from what I see, most are now delivered set-pieces via a promotional opportunity from a company flogging its wears. The usual quotes are carefully stitched in and finished with: “Sean O’Countyman was speaking at the launch of Magic Beans Make You Bigger.”
If it walks and quacks like a duck, then it’s a duck. If you get paid for it, then you are, at a minimum, a step above amateur. The more you get, the more professional you become.
A headline in the Herald last week read: “Dublin minors won the Electric Ireland Leinster MFC in MW Hire O’Moore Park.” Even the press gets entangled in the perma-fog of commercialism, eating up ink and space on corporate babble placement. 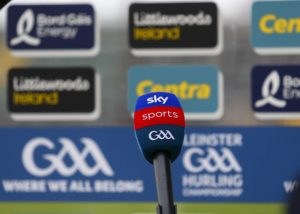 The GPA’s use of player interviews as a bargaining chip in their battle with Croke Park over expenses was another sign of the gradual professionalization of Gaelic Games. Picture: INPHO/Ken Sutton

Meanwhile, Mrs Horse washed the jerseys of the minors and Mr Horse had the kids and himself going around the estate annoying neighbours and flogging lotto tickets for the club. Come All-Ireland time, he hopes he’s in the frame for a ticket for the match.
In the 1960s, Charlestown occasionally hosted Connacht Championship matches. No longer. Mayo the county churns the clubs and towns for money for the county team but when MacHale Park was shut for work on the pitch, the chance to throw a few bob in the direction of Ballina or some other Mayo town was eschewed for Roscommon, Sligo and Carrick. Mr Horse cursed but sure what could he do as he drove, kids and Mrs moaning in the traffic jam into Carrick. It’s progress, the rules, health and safety, the authorities tell us. But he will be back with the bucket and tickets before the summer is out. And Mr Horse will be expected to carry the can. Buy a tile and a packet of grass seed.
It’s another remove of the game we once knew. It’s MacHale or nowhere. One county, one ground and one team. The senior footballers are our million dollar team. There you have it, rolled and packaged. Once upon a time, college football came to your town or village. We had great times years ago going to Crossmolina, Sligo, Tubbercurry, Tuam. Hell, back in 1970 we arrived in Boyle to play Summerhill and an errant cow on the pitch blocked down one of our few forays at their posts.
Today Knock is not the miracle town of Mayo; a small village called Bekan is. Like a magnet, it sucked the colleges to its core. No more town ball; it’s Bekan ball and the new shrine is the Dome. I’m not knocking it, merely noting it.
The ladies landed on a thorny thicket lately. Mayo is well represented in the Aussie Rules version of the game. Indeed three of our would-be starting forward line have been over there. The change to an August kick-off with its attendant preseason for the Aussie Rules girls left many of them with a decision to make. The choice was to play a sport with a fair reward in a perfect clime or play a game where the only reward is hero status, more than likely no mileage and in some counties, iffy support structures. To me, to the player, the choice was simple. Play at home, where, in some counties, decisions are made on the back of an envelope. Or play in an environment that rewards excellence. Not too hard to pick which one, is it?
The Aussie Rules set-up shouldn’t become the bogey in the room. Assuming roughly 900-plus girls are involved with county panels, fourteen to twenty playing away in Australia won’t alter the ballast. But it will alter the mindset. “Why should I have to go to Australia to get rewarded for my skill set?” is a fair question.
That fourteen to twenty girls from GAA backgrounds are prominent in that game will spill back into ladies’ football here at home. Take care of us or we will go to a sport that will.
Never underestimate any sport that requires you to fetch a ball over the head, be it rugby, as Zinzan Brooke excelled in, acknowledging having picked up his aerial expertise from the GAA, or the girls currently in Australia also rising fearlessly for the leather. It’s not an easily acquired skill. Gaelic players are reared with it.
Until the 1974 All-Ireland final, the corner or full-back kicked out the ball. The goalkeeper kept his council. Jack Cosgrave, the Galway full-back, kicked out for them in that final. But change was afoot. Heffo’s Dubs arrived in town. Soccer-style tracksuits with their names on the back, the same coloured socks on all the team.
And Paddy Cullen with his Puma boots took their kick-outs. Cullen was more of a soccer-style keeper. Suddenly Jack and the other twos and threes would be redundant as restart merchants.
Today’s keeper is as important as the number 10 in rugby. Back then, if you were a keeper short, the trainers scanned the crowd and press-ganged some retired lad back into service. Today’s number one has to ‘get his kick away’ to find his ‘wing-back/half forward’. Back in big Jack Cosgrave’s day you hoofed it out and may the best man win. It was no longer your problem. Today the Sunday Game fillet squad would have you slaughtered.
When Paddy Cullen, with his colour-coordinated darker blue jersey and soccer-style boots, started kicking the ball out back in 1974, many didn’t see the change about to be wrested from the old days. Soon, Kerry had Charlie Nelligan spraying those fifty or sixty yard passes into Jacko and Seanie Walshe’s maws. If the keeper you had couldn’t do it, you got one who could. Joe Kernan told Benny Tierney of his new ways back in 2002. His keeper would play a certain way. Benny looked and listened. Joe reassured him: “Don’t worry Benny. If it doesn’t work out, I’ll replace you with a keeper who will get it.”
Benny got it, Joe got it and Armagh got Sam. Change came. No longer would the best footballing team win Sam like the great Kerry outfit of Micko. The advent of Meath saw a mixture of tactical nous and flint-edged tackling maxing the rules and posing a question: you may have the better players, but have you the better team? 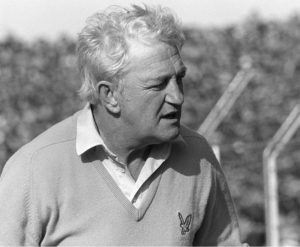 Kevin Heffernan bought new ways of thinking to the fore during his time in charge of the Dublin footballers in the 1970s and 80s. Picture: INPHO/Billy Stickland

Tyrone, Armagh, Donegal, and Dublin (belatedly, but most successfully) all adapted to the new era. Today we are in a mad scientist’s laboratory with keepers appearing in the half-forward line, kick and hand-passes going back and over nudging us into an early sleep. The mark was brought in to reward the high fetch, not reward some butty buck for clutching a forty-yard chest-high pass into his belly, stick the hand up and take a free kick at the posts.
But it will soon change again. This year’s championship is a dummy run. Ceding late September for late July will change. Having the likes of Mayo and Tyrone garaged for six weeks until the provincial finals were sorted won’t happen again. We will get a plate of meaningful games spread across the summer. Hopefully, the Tailteann Cup will evolve into a meaningful competition with promotion, or even intermediate and junior All-Irelands like the senior Sam.
Heffo’s Dubs took on Kerrymen of the likes of Paddy Bawn Brosnan, whose tactical shop-window thinking was “give me the fishermen and farmers for the summer team along with a college boy to take the frees.” Dublin of 1974 heralded the seismic shift. When Micko came a year later, his team was full of college boys, solicitors, doctors, auctioneers and students.
Soccer boots and Adidas jerseys came next along with the famous Bendix advertisement with the Kerry boys bare-chested leaning over the machine, smiling mischievous smiles. Back then we even still kissed the bishop’s ring before throw-in and had the Easter Mercy Committee. But as Dylan had sung a decade earlier, the times were a-changing. We are in flux now. Let’s do it right because it’s as inevitable as the tide coming in.
The biggest challenge will be the marrying of Mr and Mrs Horse, the pitch-marker, underage trainers, dressing-room cleaners and jersey-washers, into the new era. When a crack comes in a pane of glass it never tends to improve. The split will break into elite county outfits and clubs as feeders, just the way pro rugby went in the early 1990s. And the pane of glass will have to be replaced, or at least have some tape stuck to it.
Wherever we are going, whatever the journey is, one thing is for certain. We are never going back.