The GAA have appointed Barry Cassidy to referee next Saturday’s All-Ireland SFC Round 1 clash between Mayo and Monaghan. 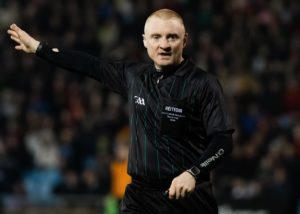 Referee Barry Cassidy pictured during the 2020 Division One meeting of Mayo and Dublin, a game in which he sent-off Jordan Flynn in the first-half. Picture: INPHO/Evan Logan

The Derry man has attracted the ire of Mayo supporters on previous visits to Castlebar, sending off both Aidan O’Shea and Jordan Flynn in the first-halves of National Football League fixtures in 2012 and 2020.

A native of Bellaghy, Cassidy has been on the Championship referees’ panel since 2012, the same season in which he took charge of his first Division One game – a controversial victory for Down over Mayo at MacHale Park.

It was, in particular, his decision to show O’Shea a red card just nine minutes into that game, after the Breaffy man had clashed with Daniel Hughes, that had rubbed the Mayo fans up the wrong way. What happened at full-time, however, was totally wrong. As stewards escorted the official from the pitch, a programme hurled from above the tunnel area struck Cassidy in the face. A plastic bottle thrown by another spectator narrowly missed the referee.

It wasn’t until 2018 that Barry Cassidy was handed his first All-Ireland quarter-final fixture but two years later he was back in hot water with Mayo supporters, this time for dismissing Jordan Flynn for a high tackle in Mayo’s Division One defeat at home to Dublin. The locals among the more than 15,000 spectators in MacHale Park that night loudly jeered Cassidy at the final whistle for his policing of that fixture.

Last year he took charge of the Munster SFC final between Kerry and Cork.

Meanwhile, extra-time will be played if required when Mayo and Monaghan lock horns for what is the first ever senior championship meeting between the counties. And in a scenario where normal or extra-time has failed to separate the sides, the tie will be decided by penalty kicks.