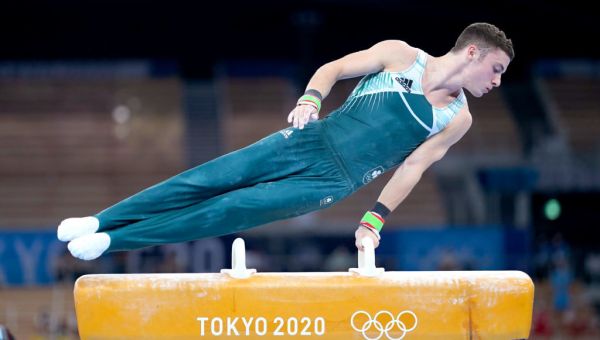 Politicians north and south of the Border have criticised the decision not to let Olympic gymnast Rhys McClenaghan and two other athletes compete in the upcoming Commonwealth Games.

McClenaghan has been barred from defending his gymnastics title at the Commonwealth Games in Birmingham in a ruling that has been labelled as a “disgrace” and “wrong” by politicians.

The 22-year-old and his two Northern Ireland teammates have been told they are ineligible to compete in the event this summer because they routinely represent Ireland in competitions overseen by the Federation Internationale de Gymnastique (FIG), the sport’s international ruling body.

Earlier today I was informed that the International Gymnastics Federation (FIG) will not be allowing myself and my team mates to compete at the Commonwealth Games for Northern Ireland. pic.twitter.com/E8FndrY9Xv

He won gold while representing Northern Ireland at the Commonwealth Games in 2018.

The Good Friday Agreement enshrines the rights of citizens in Northern Ireland to identify as Irish, British, or both, giving citizens the right to hold an Irish and/or British passport.

Northern Ireland’s communities minister Deirdre Hargey criticised the decision by the FIG, and has written to the body to seek an immediate overturning of the decision.

Ms Hargey said: “The decision taken by the International Gymnastics Federation to exclude our athletes Eamon Montgomery, Ewan McAteer and Rhys McClenaghan from the Commonwealth Games is a disgrace.

“The announcement is ill-advised and does not respect the rights of our citizens.”

The Sinn Féin MLA added: “The timing of the announcement is something that I struggle to understand given that it is so close to the start of the Games. The athletes concerned have put their lives on hold and have dedicated months, if not years, to prepare to compete at the Birmingham Games.

“The decision of the federation has totally disregarded the detrimental impact that the decision will have on the athletes, their families and on the sport of gymnastics here.

“I have contacted FIG seeking an immediate overturn of this decision.”

It comes after Tánaiste Leo Varadkar said that the decision was “wrong”.

“I hope FIG will reconsider. The Good Friday Agreement provides unique status for people in Northern Ireland. It’s based on the idea that you have the right to be Irish, British or Both and be accepted as such,” Mr Varadkar tweeted.

Ireland MEP Sean Kelly also said he would be writing to the FIG to ask it to reconsider its ruling.

He said: “This decision flies in the face of logic and is against the spirit of sport, ignoring rights granted under the [Good Friday Agreement].

“Others have proudly represented Ireland at the Olympics and NI at the Commonwealth Games.”