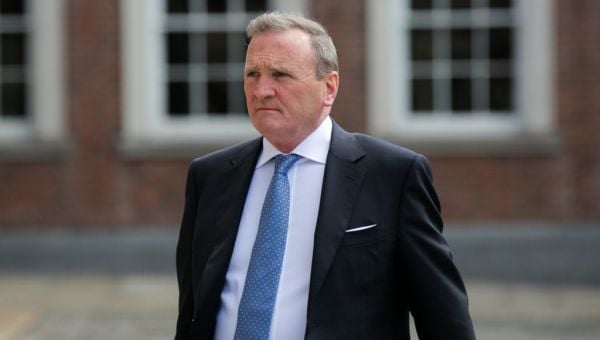 A former Garda sergeant says he was told by his superior to “cover up” the alleged sexual abuse of a child in which a suspect was allegedly connected to senior gardaí, the Disclosures Tribunal has heard.

The tribunal heard that the superintendent denies the allegations and has described them as “unfounded and vexatious”.

The tribunal is hearing from retired Gda Sgt Paul Barry, formerly of Mitchelstown Garda station in Co Cork, who made a 2012 complaint that the proper investigation of a child sexual assault allegation was prevented by a superintendent, Michael Comyns, who he says also bullied and harassed him.

The Director of Public Prosecutions (DPP) later directed that there be no prosecution of the child sex assault allegation.

The former garda claims the investigation found that one of the alleged suspects was connected to two senior gardaí, former Supt John Quilter and then Chief Supt Anthony Quilter, the tribunal has also heard.

After a criminal investigation, the DPP directed in November 2015 there be no prosecution relating to Sgt Barry’s claim that Supt Comyns had perverted the course of justice, due to a lack of evidence.

On Friday at the tribunal, which is being held in Dublin Castle, Mr Barry told Mark Harty SC, for Supt Comyns, that he would not directly communicate with Supt Comyns, who was his district officer based in Fermoy Garda station, because of the bullying complaint that he initiated in October 2012.

‘I’ll be watching you’

Mr Harty asked Mr Barry about the nature of the “chaotic” situation, whereby Mr Barry would not attend briefings by Supt Comyns and refused to answer phone calls from him as Mr Barry preferred to be supervised by his inspector on the advice of his GP.

Mr Barry said that the situation was “not created by me, it was created by your client [Supt Comyns] when he directed me to cover up the sexual abuse of a child”.

Mr Barry had met with Supt Comyns to receive a Regulation 10 disciplinary warning on August 2nd, 2012, for being late for duty. Mr Barry claims that Supt Comyns told him at the meeting: “I’ll be watching you”. Mr Barry told Mr Harty that he took this to mean that he was being “targeted” by Supt Comyns.

Mr Barry said that a subsequent attempted transfer to Fermoy by Garda management, where Supt Comyns was based, would put Mr Barry “under his immediate control”.

Mr Barry reported himself unfit for duty on August 6th, 2012, and did not return to work until, he says, he was financially forced to do so on March 29th, 2013.

Mr Barry said that in 2014, Supt Comyns applied to Garda management to have him transferred to Fermoy despite a medical cert from his GP stating that he should not have contact with Supt Comyns.

Regarding the cancelled transfer to Fermoy, Mr Harty asked Mr Barry how far he was willing to go in resisting Supt Comyns and was told: “As far as I could within the limits of the law”.

In June 2014, Mr Barry says he was “physically sick” at the Irish Open golf tournament held at Fota Island when he found himself in the same room as Supt Comyns.

Superintendent John Quilter had been in charge of Garda planning for the event, assisted by Inspector Eoghan Healy. Mr Barry was detailed for duty between Barrystown roundabout and Carrigtwohill Village, reporting to Insp Healy.

However, in the run-up to the event, Supt Quilter took annual leave and Supt Comyns was designated to take over by Chief Supt Gerard Dillane. As part of policing the event, Mr Barry says he was required to attend a large Garda briefing held by Supt Comyns, putting both men in the same room but with around 100 other gardaí.

Mr Barry claims that Supt Quilter and Supt Comyns “conspired to put me in that situation”, along with Ch Supt Dillane. Mr Barry says he told Supt Quilter of his situation regarding Supt Comyns in advance of the tournament and was told that there would be no contact with Supt Comyns. All three men deny any conspiracy regarding the event.

Today, Paul Carroll SC, for Supt Quilter said his client will give evidence stating that he does not accept in any way that he conspired to target or discredit Mr Barry. Mr Barry has told the tribunal that he “immediately” applied for a pre-retirement course after his experience at Fota Island.

Mr Carroll queried if the event was so “awful and upsetting” why did Mr Barry not tell his psychiatrist “a couple of days later”, which would have been in his psychiatrist’s notes made available to the tribunal. Mr Barry said that the notes appeared to be correct.

Mr Carroll said the psychiatrist even noted an improvement in Mr Barry’s mood, to which Mr Barry replied that his mood had increased because of his decision to retire.

‘Getting out of this hellhole’

Chairman Sean Ryan asked Mr Barry if it did not “look a bit funny not to mention that it was all over and that you were getting out of this hellhole”, to which Mr Barry agreed.

Mr Barry told his barrister, Shane Costelloe SC, that of the nine issues before the tribunal, the child sex assault allegation complaint was “absolutely” the most serious matter to him.

The witness told Mr Costelloe that he did not believe there was any serious problem in not communicating with Supt Comyns because he was “abiding with the conditions of the medical cert and engaging with Inspector Antony O’Sullivan at all times”.

Concluding his evidence to the tribunal, Mr Barry told Mr Costelloe said that he “loved” working in Mitchelstown with colleagues he could trust. He said that in his 30 years on the force, he had never applied for a transfer and had successfully appealed two transfers attempting to take him away from Mitchelstown.

The tribunal resumes its hearings on Tuesday next week.