Business set up during lockdown proves a big success

A furniture business set up during the middle of the Covid-19 pandemic has become a fantastic success story.

2EZ Furniture in Belmullet continues to go from strength-to-strength and is now one of the leading furniture stores in Mayo.

In February 2020, Belmullet native Seamus Murphy returned home to Ireland with his partner Donna and their son Sean after spending a few years living in London. A qualified carpenter by trade, Seamus had been project manager on a site in London and lived England’s capital for more than eight years. When Covid struck, Seamus and family returned home to live with Donna’s mother and father in Fermanagh, and eventually settled in his hometown of Belmullet. 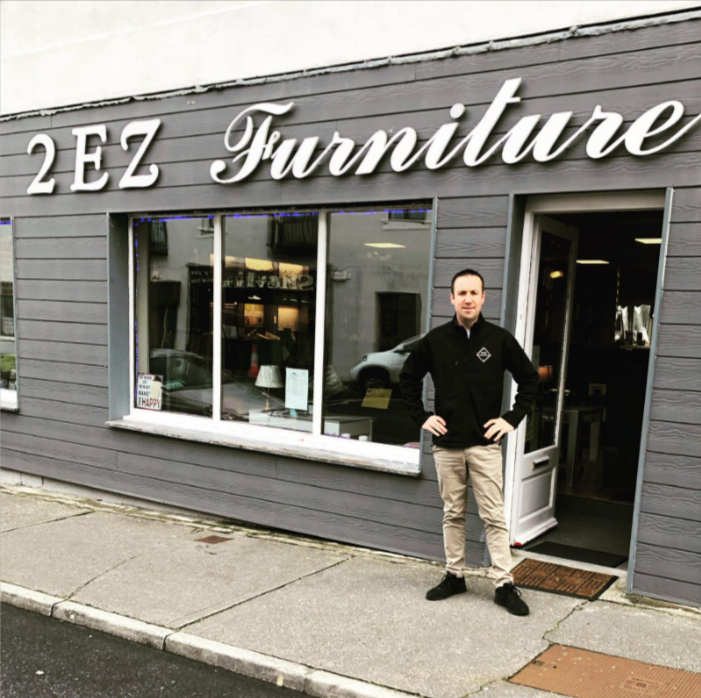 Seamus Murphy returned home to Ireland at the start of the first Covid lockdown in 2020 and began running 2EZ Furniture later that year.

Seamus had been helping people acquire furniture for over 20 years and during the pandemic, he began to get bored with not having any work. One day lightbulb he had a lightbulb moment.

“I remember securing the site up in Rickmansworth just outside London and locking the gate, as all my Irish and fellow colleagues had left a few days previous with things starting to escalate due to the pandemic I wondered what lay in store,” Seamus said.

“So, Donna and I decided that we would pack up the car and go home for a few weeks. We ended up getting the boat from Holyhead on Sean’s second birthday little did we know that we would be living at home ever since.

“I started making barbecues because the weather was great in March and April, and I bought the barbecues and outdoor furniture for a reasonable price off a company in the UK that I had known over the years and I started thinking, ‘I could hopefully make a living from it and if nothing else I really enjoyed making stuff again and meeting people’.

“The whole thing just seemed to take off I was very much into it and I really thought this could become something good and that was exciting to me if not for everyone else around me,” he laughed.

“There were long hours in the workshop and on the road and it wasn’t easy as we had a young family and only for Donna, I wouldn’t have been able to get half as far as we have and I’ll always be very grateful to her and her family in Fermanagh were also amazing with everything they did as were my own family and friends in Erris when we eventually moved down in July of that year.

“I spoke with James and Maureen who were friends of mine from a few years back and they had this shop here in Belmullet, called Mangan’s Furniture which was a large shop and probably one of my favourites at home and not just because it was across the road from McDonnells bar.

“James told me that they were going to maybe go travelling and had spoken about retirement and he asked me would I like to take over the place, and I said I’d think about it.

“Lo and behold, I was taking over the shop that August,”

In August 2020, Seamus opened 2EZ Furniture in Belmullet and it has been a success ever since.

“The locals here have been very good to us and people from around Mayo and beyond come to us, so we are always kept going. We are all about value and family and we will always do our best for people no matter what. My niece, Lucy, looks after the website she is brilliant at the more technical side of things and is a whiz on the website which thankfully has been so well received, not just in Mayo but nationally and it really helps us to thrive and survive,” Seamus added.

“It’s great to be back now living and working in Erris, where I grew up, and it’s great to raise my children here and that they’ll hopefully experience a similar up bringing to the one I had on the edge of the Atlantic Ocean.

“We have another little boy now called Shay, who is a year old, and it’s lovely to be living in such a great place and exceptional community raising our family.

“London was lovely and I’ll always be grateful for all it’s done for me and my family, but it’s great to be surrounded by friends and family here and easier with the children.”