Mayo are taking the bulk of the early support to keep their All-Ireland campaign alive after today’s qualifier draw threw up a first-ever championship clash with Monaghan. 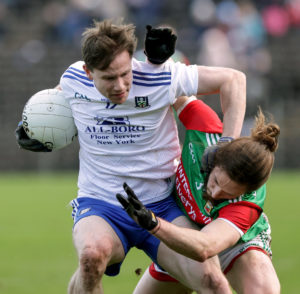 The Green and Red had their Connacht campaign ended by Galway at the quarter-final stage and they will now face off against the beaten Ulster semi-finalists with home advantage at Castlebar on the weekend after next, June 4/5.

The draw has seen Mayo’s hopes of lifting Sam Maguire this year clipped marginally into 10/1 from 11/1 with BoyleSports off the back of the draw, with James Horan men chalked up as hot 4/9 favourites to get their season back on track with victory over the Farney.

“It’s no easy route back for Mayo with another first division side in Monaghan on the horizon. But they do have a knack of navigating the qualifiers and are well fancied at home, so we’re 10/1 from 11/1 for now because punters certainly aren’t writing off their All-Ireland chances,” explained BoyleSports’ Lawrence Lyons.

Another all-Division 1 clash is on the cards as Tyrone were pitted against Ulster rivals Armagh, but last year’s All-Ireland winners have been eased slightly to 16/1 from 14/1 to defend the Sam Maguire despite being made 4/7 favourites for their trip to the Athletic Grounds.

Cork (2/5) and Meath (8/11) are favourites to get the better of their qualifying ties against Louth and Clare respectively, while Kerry remain 11/8 favourites to win this year’s All-Ireland SFC.