Spot the odd team out among Mayo’s potential opponents?

Mayo will discover their opponents for the first round of the 2022 All-Ireland Senior Football Championship on Monday morning. The draw is to be broadcast live on RTÉ Radio 1’s Morning Ireland programme just after 8.30am. 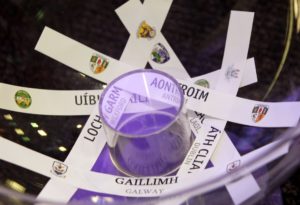 James Horan’s side are one of eight in the hat, the common theme that they are all National League Division 1 and 2 teams who did not qualify for their provincial final.

It’s an open draw meaning that Mayo could be drawn to play any of the following teams: Tyrone, Armagh and Monaghan from Ulster; Meath and Louth from Leinster; Cork and Clare from Munster.

The first team drawn will be granted home advantage, providing their ground is deemed suitable by the GAA’s Central Competitions Control Committee to host the fixture.

The games are pencilled in to be played on the weekend of June 4/5.

Monaghan are unique in that they are the only one of the possible opponents who have not played Mayo in the senior football championship.