After four improving years at the Showgrounds, Liam Buckley’s time as manager of Sligo Rovers has ended by mutual consent, it has been announced. 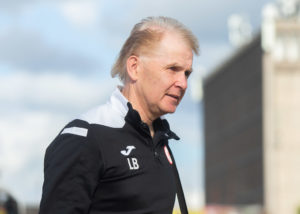 Liam Buckley arriving to Dalymount Park for last Friday’s clash with Bohemians which turned out to be last in charge of Sligo Rovers. Picture: INPHO/Tom Maher

17 games into the season, the Bit O’Red lie sixth in the table having lost 2-1 to Bohemians on Friday night. Rovers finished an impressive third in last season’s Airtricity League Premier Division campaign.

Dubliner Buckley first took charge of Sligo Rovers ahead of the 2019 League of Ireland season, guiding the club to the FAI Cup semi-finals and a seventh place finish in the league.

He secured the club European football in 2020 for the first time in six years, after the team finished fourth in the table.

“Liam came to the club in 2019 and directed us to securing two seasons of European football since, which is the aim for the club each season,” said club chairman Tommy Higgins in a statement on the club website today.

“Liam carried himself with great dignity throughout, with his experience and knowledge of the League of Ireland being a great asset, and his style of football being pleasing on the eye for our supporters.

“We wish to send our unreserved thanks to Liam for his commitment during his time and we wish him all the best for the future.”

Sligo Rovers are in action this Monday night where they host second in the table Derry City. Assistant manager John Russell will take charge on an interim basis.