The poor relation has fought hard for its rich reward

When Shamrocks won their first-ever Mayo senior football championship title in 1977, it wasn’t because he wasn’t good enough that Joe Henry didn’t start the final. Anything but.

Henry was an exceptional Gaelic footballer, even featuring on a championship-winning Thomond College side that included Kerry stars Ogie Moran and Mick Spillane, and Galway’s Brian Talty. But on the same day that Shamrocks were going up against a famed Garrymore team that was seeking to lift the Moclair Cup for a fourth consecutive year, Mayo County Board had in its wisdom decided to play the Mayo senior hurling championship final as well. 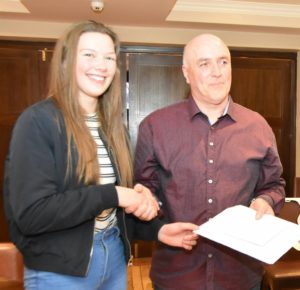 Lisa O’Rourke, who won a World Boxing title this week, pictured in 2017 making a presentation to her then Castlerea Community School teacher – and former Mayo hurler – Joe Henry who coached the school basketball team to three All-Ireland titles.

Bad enough that they had fixed the football decider for MacHale Park and the hurling final for a well-ploughed training pitch out behind MacHale Park’s old stand, the timing of the two games was that the hurling final between Tooreen and Ballinrobe was still in the progress when the ball was thrown-in for the football final. Not alone was Joe Henry an exceptional Gaelic footballer, he was a hurler extraordinaire, a future Railway Cup winner with Connacht as the only non-Galway player selected, and Tooreen’s leading man. He boasted many skills but bilocation wasn’t one of them.
Henry’s six points in that ’77 final weren’t enough to save the Blues from slipping to a three points defeat against a Ballinrobe side that came from six points behind at half-time to successfully defend the county hurling title. But he changed jerseys afterwards and subsequently was the only substitute introduced by Shamrocks (or Aghamore in new money) who caused a major stir by seeing off Garrymore by 4-6 to 0-13 in the football decider.
The mere fact the two club finals had proceeded on the same afternoon in Castlebar, on separate pitches just yards from one another and at times that overlapped, was a demonstration of how disrespected the small ball game was by Mayo GAA officials. Tooreen’s quite reasonable plea in the run-up to have their game moved to a different date had fallen on deaf ears.
I was reminded of this in the wake of the diabolical decision that recently saw the Mayo hurling team excluded by its own county board from playing its Christy Ring championship game with Sligo in MacHale Park on the basis that the newly grown pitch needed protecting, while the board continued to allow the Mayo footballers hold training sessions on the same pitch that very week. The more things change, the more they stay the same. 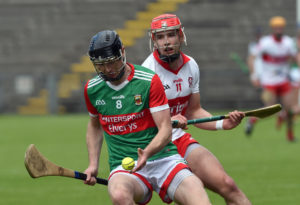 When common sense finally prevailed (or was it simply a collapse to the weight of public opinion?) and the team was granted the use of the county ground for last Saturday’s make-or-break clash with Derry, where only the winners would advance to this Saturday’s Christy Ring Cup final in Croke Park, the Mayo hurlers put their money where their mouth was, so to speak, and produced their very best performance of the season on the impeccable brand new surface at Hastings Insurance MacHale Park. The team management had argued publicly that their small but skillful team would flourish in such an environment and the players repaid that faith by the bucketload.
The upshot is that on Saturday next, Mayo will contest its highest-level championship hurling match ever. Ne’er before has the county appeared in the final of the Christy Ring Cup, a game where victory would — theoretically, at least — afford Mayo the opportunity next year to qualify for the Liam MacCarthy Cup. It’s heady days for those who have kept the flame lit.
But how ironic that this remarkable high has been achieved just a matter of weeks after the team endured a quite horrible low, that of relegation to the fifth rung of the National Hurling League. The two realities seem almost impossible to square and yet it’s a fact that in 2023, there’s the possibility of Mayo playing league hurling against Fermanagh and Monaghan but championship hurling against Antrim and Offaly in the Joe McDonagh Cup.
The latter, of course, is all dependant on Derek Walsh’s side getting the better of Kildare this Saturday, the tallest of orders it would seem based on the 30 points skinning Mayo received from the Lilywhites in the opening round of the competition as recently as April 9 last. But when you consider that the Derry team who Mayo beat by five points last weekend to qualify for the final, had themselves beaten Mayo by 19 points (pulling up!) in February’s Division 2B clash at Owenbeg, it goes to show that nothing, absolutely nothing, is impossible, and how quickly one’s fortune can change. 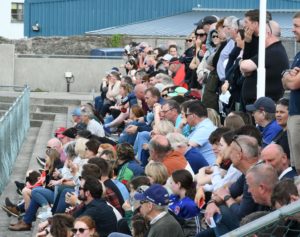 Supporters of the Mayo and Sligo hurlers at James Stephens Park, Ballina for the recent championship encounter between the teams. Picture: John O’Grady.

I’m always drawn back to that incredible result on the last Sunday in February 1986, one we’ve written about in these pages more than once before, when Mayo didn’t just win a game of hurling, but beat hurling aristocracy. In the National Hurling League. Away from home. In fact, three short years after Waterford were humbled in Dungarvan by fourteen Tooreen men and a goalkeeper from Castlebar Mitchels, the Deise were beating Clare and Cork en route to their eighteenth appearance in a Munster senior hurling final.
The aforementioned Joe Henry struck all three goals, and three points too, in Mayo’s 3-7 to 2-6 victory in Division 3, but also featuring for the Green and Red that day — and scoring three points to boot — was John Cunnane, a selector with this year’s Mayo team. You wouldn’t blame him if he has invoked the spirit of ‘86 in one or two dispatches to the players in the Mayo dressing-room this week.

The game at Fraher Field was played in windy conditions. Mayo had its benefit in the opening half and were six points up when Joe Henry rattled in a couple of goals in the space of a few minutes to leave the scoreboard reading 2-6 to 0-0 at half-time. Henry completed his hat-trick just minutes after the turnaround and, remarkably, the visitors were 15 points in front.
Waterford mounted a stirring comeback but Wexford-born ’keeper Dave Synott performed heroics to keep Mayo in front and secure promotion to Division 2 where they played the likes of Tipperary, Antrim and Dublin the following season. It’s important to believe then that on Saturday, anything really is possible.
That’s not to deny, however, that Mayo are travelling to Jones’ Road as anything other than raging outsiders. In the process of qualification, Kildare scored 60 more points than Mayo over the course of their five wins from five games in the round-robin phase, and conceded 38 points less. 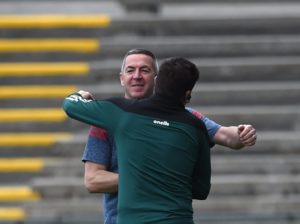 In other words, they score a dozen more points per game and ship almost eight points less. But as baseball legend Lou Piniella once remarked, “Statistics are like bikinis – they show a lot but not everything.”
Forever the underdog, perhaps there’s one more bite in Mayo to come.