Mayo girls are the pride of All-Islands

The bonfires are sure to burn on Clare Island this weekend to celebrate the homecoming of its ladies gaelic football team which has today been crowned All-Island football champions. 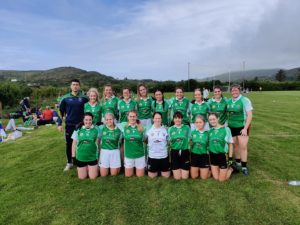 The victorious Clare Island squad that has won the All-Island ladies football title on Bere Island in Cork.

Taking place on Cork’s Bere Island today, the Mayo outfit won four games on the trot, including an epic final against their great rivals Inis Mór from the Aran Islands.

The teams evenly shared eight goals but it was the Clare Island girls who prevailed over the much larger island on a 4-9 to 4-6 scoreline.

It was a six-team competition with the top two from each group of three advancing to semi-finals.

Clare Island beat Cork’s Whiddy Island 1-8 to 0-2 and Arranmore from Donegal by 3-13 to 2-2 to advance to a last four clash with host side Bere Island. They continued their high-scoring form to run out as 2-10 to 2-01 winners and capped an excellent day’s work with victory over their Galway neighbours in the decider. You can watch their celebrations here.

Meanwhile, Clare Island’s men’s team have also made a winning start to their All-Island campaign, overcoming Bere by 4-4 to 0-2 in their opener. They face Inisbofin in Round 2.

The All-Islands Championship has returned after an enforced hiatus caused by the Covid-19 pandemic.