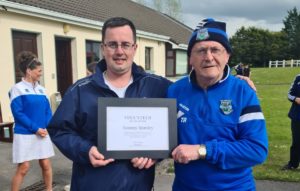 Sean Treacy, on behalf of the Mayo Women’s League, presents Manulla’s Tommy Rumpley with the Foodie Save-sponsored Volunteer of the Month award.

Tommy Rumley, a name which will always be associated with soccer, not only in Manulla but across Mayo in general, has been named as the first-ever recipient of the Mayo Women’s League Volunteer of the Month award.
Tommy has been an integral member of Manulla FC and in particular a great supporter of its ladies team. Wherever Manulla’s ladies are Tommy will always be found.
Joe King, secretary of the Mayo Women’s League, said that whether it’s for club or county, Tommy Rumley has always given his all to every aspect of the game.
“His two main loves in football are Manulla’s ladies team and the Mayo Masters League,” explained King. “Tommy got involved many years ago with Dave McDonnell and myself, helping out with the ladies and attending every session. He travelled the length and breadth of the country with Manulla and was there for all their successes and heartbreaks.
“When players needed someone to talk to, Tommy was there, always knowing what to say and always saying the right thing. When Manulla lifted the WFAI Intermediate Cup in 2017 the proudest person in Limerick that day was Tommy.” 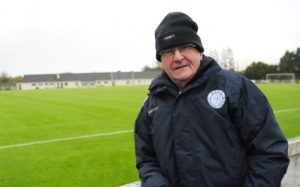 Rumley continued to remain involved with the Manulla ladies, supporting Jenny Dempsey who was manager in 2020 and now currently with Ollie King, and has been an ever-present at the Mayo FA’s Masters League fixtures every Wednesday or Thursday night in Castlebar.
“It doesn’t matter whether it’s raining, snowing, freezing or just a nice night, Tommy is there making sure games were played. His interactions with players from all clubs made Tommy a popular and well-liked figure,” said Joe King.