Council chiefs accused of ‘watering down’ the Mayo emblem

Mayo County Council has “lost sight” of itself and is not a marketing company, a local councillor has claimed. 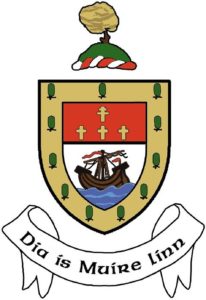 Westport-based Fine Gael councillor Peter Flynn made his comments at a recent council meeting after putting forward a motion calling on the council to use its traditional county crest from now on.
Mr Flynn said the original crest should “take precedence” over any other branding. He claimed the Mayo.ie logo “symbolises a lost decade” and the council had “lost sight” of what it was, noting that it was “not a marketing company”. He said the council could continue to use the ‘M’ logo but it should have less primacy than the county emblem.
Ballinrobe-based Fine Gael councillor Patsy O’Brien agreed, saying the emblem had been a “stalwart” and its significance had been watered down over recent years.
Independent councillor Michael Kilcoyne said the crest often did not even feature in advertisements in local newspapers. He said councillors had discussed the issue many times but it never seemed to be resolved. He claimed that anything put forward by the elected members was “resisted” by the executive.
Fianna Fáil councillor Blackie Gavin insisted that any new vans, signage or bins should have the traditional logo and not the Mayo.ie logo.
Chief executive Kevin Kelly said he would conduct a full report on the issue and present it to the councillors. He strongly disagreed with Mr Kilcoyne’s comments that the executive ignored the views of councillors and said he was happy to go with whatever the elected members decided on in relation to this issue.