A ‘soul-destroying’ disease that began with just one tick

Ten years ago, Eddie Thornton from Knockmore was a very fit and active man in his late 30s, who loved to be busy and disliked being inside when there was work to be done. He proudly claims he has only ever been to the doctor twice in his life. The phrase ‘mad for work’ springs to mind. He and his wife Majella would joke the only time they would be guaranteed to have dinner together was Christmas Day. 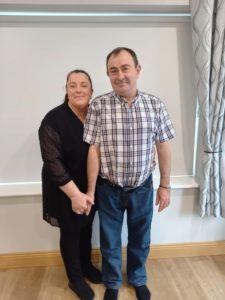 Now, 48-year-old Eddie uses a wheelchair to get around the house and suffers from regular blackouts occurring every seven to eight days. He is one of a number of sufferers in Ireland of Lyme Disease, a bacterial infection spread to humans by infected ticks, small spider-shaped creatures that feed on blood by biting and attaching themselves to a mammal.
The most common symptom of Lyme is a red skin rash that is bullseye-shaped. Chronic flu-like symptoms and fatigue are usually experienced soon after infection. However, if left untreated, Lyme disease can develop further and over time, present with neurological symptoms.
This is the story of how something so innocuous as a bite from a tick caused his condition. It started when Eddie was working in the Scottish Highlands, helping to build bridges and roads as a subcontractor for an Irish contractor.
“We were working on bridges and roads in the Highlands. It was in a wooded area where there would have been a high population of deer. We were made aware of the dangers of Lyme Disease and to watch out for ticks,” explains Eddie.
“We would always keep a close eye out and one night while showering, I saw a tick stuck in my right forearm, so I removed it carefully.”
None of the typically-associated symptoms presented themselves such as flu or a rash. Eddie came home to Knockmore and continued his work as a plant hire contractor and agri-contractor. However, in 2015, he began to notice some changes.
“In late 2015, I noticed a bit of weakness in my legs but we were working fairly hard at the time, so I put it down to that and just kept going, kept working on.
“By 2016, I was quite bad in my walk. I went to the doctor and he referred me to Mayo University Hospital (MUH). I went up on a Monday morning to A&E and went through the usual checks there.
“The tick was in the back of my mind the whole time. I just wanted the peace of mind of having it ruled out and I presumed a simple blood test could eliminate Lyme as a possibility. They were testing for MS, Motor Neurone, Parkinson’s, neurological issues like that so I asked could they do a Lyme Disease test.
“It is quite difficult to pick up Lyme Disease on a blood test. It has to be screened correctly in a very modern lab. I had a lot of tests done and there was nothing showing up to suggest it was MS or any other neurological disease. I went to the hospital in Galway to neurological clinics and they couldn’t put a name on it either.”
Eddie and his family were determined to get to the bottom of things because his mobility was becoming seriously affected. He was now using a walking stick to help him get around and he noticed more changes, such as sudden bouts of coldness when he would never be typically cold before this. Finally, after more testing, traces of Lyme were found in his system.
“I had a good few lumbar punctures, CT scans and MRI scans. There was a slight shadow showing on my brain and the Lyme Disease bacteria showed up in the lumbar puncture.”
The Knockmore man spent the next seven weeks in MUH, taking a hefty course of antibiotics.
“The antibiotics helped quite a bit but there was a lot of nerve damage done at that stage. My mobility was very, very poor.
“I was transferred down to Sacred Heart for physio. They were a great bunch in there and they did their best with me but the muscles had gone weak and the nerves weren’t sending signals correctly, it was all messed up.”
Around this time, Eddie, still able to drive, was also involved in a car accident while driving to the shop. He said he doesn’t recall how it happened. He damaged his hip and pelvis and this led to more lengthy hospital treatment. He began to heal up but soon started suffering regularly occurring blackouts that are still a factor in his life.
“I went outside the house one morning and fell. When I woke up, I was in an ambulance and had blacked out completely. I didn’t know the cause of it. I was brought off and tested but they couldn’t find anything wrong. 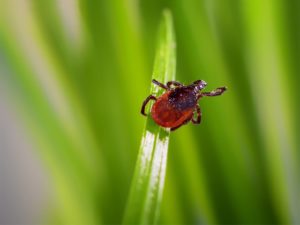 Lyme Disease is spread by ticks who attach themselves to the human body.

“A while later I was taken to Sligo University Hospital for tests and I was diagnosed with epilepsy. I was put on medication for that. It worked for a while but started to fail after a short while.”
Eddie said that despite the blackouts, the years of tests and examinations and everything his body has been through, perhaps the toughest struggle of all has been mental.
“The biggest trouble I have is that my mind is still so active for wanting to be outside working but the body won’t cooperate. That is the worst of it.
“I was always working and was very active. It has had a big impact on my wife Majella and my son Lucca (13). He was very interested in my agri work and it had an impact on him that we can’t do that anymore.
“I came out of hospital in 2017 with two crutches and I still use them today. I use a wheelchair in the house. Every morning I wake up and I see the wheelchair beside the bed. It is soul-destroying.”
Eddie’s wife Majella said it has been heart-breaking to see her husband go through the effects of Lyme Disease. She has unreserved praise for their family, neighbours and friends for all of their help over the years.
“There is so little help available in the country for this disease, so many doors are closed. I feel more awareness needs to be given to how terrible Lyme Disease can be, especially since Covid,” said Majella.
“More people are going out walking in woodlands and hills and they need to be more aware of ticks and to always check themselves to be sure. I wouldn’t want anyone else to go through what Eddie has,” she said.
“We want to thank our neighbours and wonderful friends who have been so helpful to us at every stage. I know I can pick up the phone anytime, day or night.”
The month of May is Lyme Disease Awareness Month. Tick Talk Ireland is a small group of passionate volunteers wanting to provide accurate information about the prevention, diagnosis, and treatment of Lyme Disease. They offer the following advice via their website, www.ticktalk.org:

You can also apply Permethrin to clothing (do not apply directly to skin), which can be bought in camping or hunting shops.
Avoid wooded areas with tall grass and try to stay in the centre of trails to avoid tree branches, leaves and long grass where ticks usually lie in wait for an unsuspecting victim to brush past.
Once home, check your entire body for ticks. Important areas to check are behind the ears, inside the outer ear, under the arms, behind knees, the trunk of the body and the scalp.