Lisa hits the jackpot as she strikes gold for Ireland 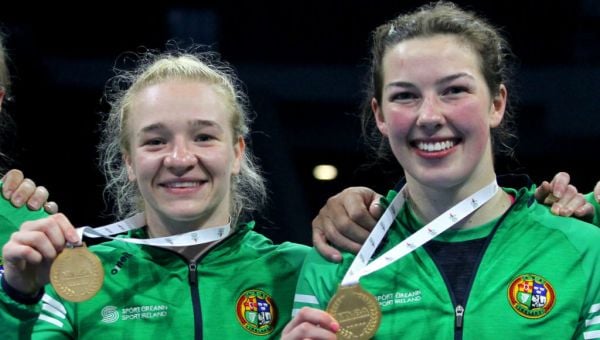 Amy Broadhurst and Lisa O’Rourke show off their gold medals.

Castlerea boxer Lisa O’Rourke leapt up and down with delight as she won Ireland’s second gold medal inside half an hour to claim the light-middleweight title at the Women’s World Boxing Championships in Istanbul on Thursday – and with it a $100,000 (€94,000) first prize.

Entering the ring straight after Amy Broadhurst had won the light-welterweight gold medal, O’Rourke claimed a 4-1 split decision to beat Alcinda Panguane, of Mozambique and become only the fourth Irish woman – after Broadhurst, Kellie Harrington and Katie Taylor – to win a World Championships gold medal.

O’Rourke, who won a National Football League Division 3 title with Roscommon just last month, stayed on the move early on, while Panguane came after her, but despite getting an early warning for a slap, O’Rourke had success with her left jab and then attempted a straight right when Panguane got close. 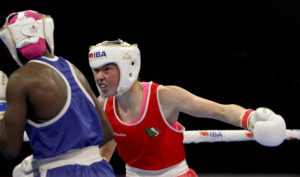 Lisa O’Rourke in action against Alcinda Panguane in her light middleweight final at the World Championships on Thursday. Picture: INPHO/Aleksandar Djorovic

There was little peace for O’Rourke, though, as Panguane kept the pressure on her and the judges were split 3-2 in the Irish boxer’s favour after the first round.

Things got more comfortable for O’Rourke in the second, as Panguane’s feet started to slow and O’Rourke was able to get more space between the pair, picking Panguane off as she moved backwards. O’Rourke looked a bit wild at times, but she was gaining in confidence and by the end of the second round seemed happy to stand and trade with the African boxer, who competed at last year’s Olympics in Tokyo.

The judges were once again split 3-2 in O’Rourke’s favour, which gave her a big lead, although Panguane could still get the verdict by taking the final round.

O’Rourke started the final round fast, winging in punches from distance and then landing the cleaner shots as things got wild in close. She went on the move in the final round, although Panguane landed a big straight left just before the final bell. 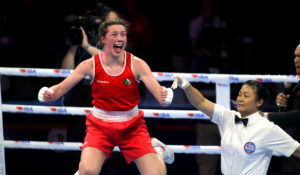 Jumping for joy: O’Rourke has pocketed a cool €94,000 after her world title triumph.

After a close first round, Broadhurst got well on top to outwork and outpunch her Algerian opponent.

Broadhurst’s biggest achievement prior to this had been a silver medal at the 2019 European Championships.

But the 25-year-old southpaw from Dundalk had a remarkable nine days in Turkey, including a light-welterweight semi-final win over highly-ranked Indian boxer Parveen Hooda.