‘The two of us just broke down’: The day captain Sully will never forget

Newly-appointed captain Kathryn Sullivan reckons that the current Mayo ladies panel is the closest she has been a part of in her time as an inter-county footballer. 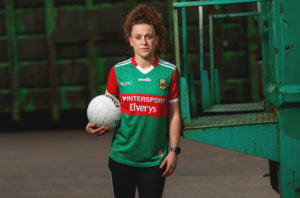 Kathryn Sullivan has been appointed as Mayo captain in what is her sixteenth season playing for the Green and Red. Picture: INPHO/James Crombie

Speaking ahead of this Sunday’s Connacht SFC final against Galway in Tuam, Castlebar Mitchels defender Sullivan said she feels Mayo are undeniably heading in the right direction as they prepare for the start of the championship, as evidenced by their strong showing in the recent National League.
Mayo won three games from three in Division 1A before falling short of eventual league champions Meath in their semi-final.
“I think we showed that we had progressed from last year by winning the three games. Last year we won two out of three. Beating Donegal was a big step in the right direction, I feel,” said Sullivan this week.
“The semi-final against Meath was very disappointing, I think we performed well at times but we made mistakes that we probably never would have.
“It’s been a long stint since then; that’s nearly eight weeks ago. We’ve just been trying our best to fix those mistakes, those little things, and we’ve learned loads from that Meath game. So hopefully we can bring that into next weekend.”
That break of almost two months has allowed time for some injuries to clear up but Sullivan does not disagree when it’s put to her that it is a longer-than-ideal break between matches. “The most important thing with it being eight weeks was that each week we learn something,” she offered. “We weren’t just going through the motions. Everyone was buying into everything. We have players who have come in and been phenomenal and hopefully everything goes well next weekend.”
Sullivan missed the early stages of the league campaign due to club commitments.
Mitchels claimed Mayo and Connacht intermediate titles last winter and won their All-Ireland semi-final against Castleisland before falling just short of Dublin’s St Sylvester’s in the All-Ireland. For the likes of herself and clubmate Danielle Caldwell, there was very little downtime between the end of the club season and joining back up with the county squad.
“In fairness to Michael (Moyles) he was pushing for us to take a couple of weeks,” said Sullivan. “But I think the likes of myself and Dani wanted to go straight back in. Because taking that break and then going back in — there are new players there and going back into a new set-up again, a new set-up with management as well, we just wanted to get straight back into it.
“It has been tough but in fairness to the management team, our training is monitored and rest and recovery is included in that. We’re happy enough and we’re not looking back on that,” she said.
That’s not to say that the sting of missing out on an All-Ireland title with her club disappeared as soon as she re-joined the Mayo camp.
Sullivan freely admits that it was difficult to park that disappointment. “Of course it was, absolutely,” she said.
“Our All-Ireland final was there for the taking. I just think the occasion might have got to some of the younger girls. But we can hold our heads high. I think we had a great year.
“Coming back and parking it, it was tough, but coming into a team like this and the players you’re surrounded with made it much easier. So I think it was the right decision to make, to get straight back into it.”
One factor which helped in that regard was a phone call from Moyles asking Sullivan to become captain of Mayo for the first time.
She is one of the most experienced and important players in the Mayo squad and her appointment to the role made complete sense, although it still came as something of a surprise to Sullivan herself.
“Yeah, it did,” she laughed. “When Michael phoned me, I remember saying it to Mam and the two of us just broke down, so maybe that was the point after the Mitchels when it came out. It’s a huge honour for myself and my family. But the captaincy is just a title.
“You’re nothing without the players around you.
This job is easy because the girls have been incredible, the commitment and work they’ve put in, they’re a credit to themselves.”
She insisted that the new role hasn’t changed how she approaches her training or preparation for games, barring some peripheral duties like dealing with the media. 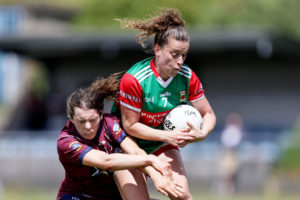 Kathryn Sullivan has noticed considerable improvement in the fitness and strength of the players in the Mayo squad. Picture: INPHO/Laszlo Geczo

“Things like this maybe!” she laughed when asked what extra responsibilities the captaincy brings.
“But no, I’m the same person. I wouldn’t let things like that get to me at all. I’d like to think the players think the same and they know they can always come to me.
“That might be a little bit extra, but there’s nothing changed whatsoever regards responsibility.”
Sullivan is about to begin her 16th season as a senior inter-county footballer, having made her debut as a teenager against Galway back in 2007. She has seen the development of ladies’ football over the last decade and a half and believes that Mayo are in a stronger place now than ever before.

I’m not saying we’re going to win an All-Ireland but I think we’re in the right direction.

“The biggest thing is we’ve really nailed down the S&C, the fitness levels even compared to last year. I think people are physically fitter and stronger. That’s huge in that it’s being implemented into underage now as well. So for those minors coming in, they’re used to gym programmes and running programmes which were almost unheard of a few years ago,” she said.
“The most important thing is that everyone has bought into it, literally every single player on this team. I think for the more experienced players it’s just about leading that, driving on the standards and just looking after those younger girls. Because it is daunting coming into a senior set-up. We’ll hopefully just push on now.
“I think there’s a great group there now, probably the closest group we’ve ever had. We might be a small panel, maybe the smallest we’ve had, but it’s a really close group and I think that’s vitally important coming into the championship next weekend.”
Looking ahead to the LGFA championship as a whole, Sullivan agrees that Meath’s All-Ireland win last year has changed the dynamic of the competition completely. After years of Cork dominance were followed by years of Dublin supremacy, this year’s championship looks wide open.
“It could be anyone’s year,” she said. “It was definitely ruled by Dublin there for four years in-a-row but teams like Donegal, Cork, and Kerry are playing phenomenally now. 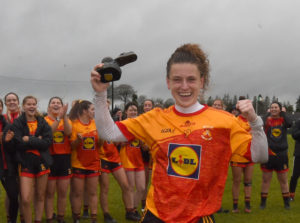 Reaching the final of the All-Ireland LGFA Club intermediate final with Castlebar Mitchels earlier this year was, for Kathryn Sullivan, tinged with the disappointment of a narrow defeat. Picture: David Farrell Photography

“What Meath experienced is something any player would like to experience. They won intermediate, came up and won senior, went and won a National League title. That group have been together for a number of years and they’ve been building for a long time.
“I’m sure they won’t mind me saying it but they weren’t anywhere a couple of years ago. It just shows anything is possible. Our group has been together for a couple of years now.
“I’m not saying we’re going to win an All-Ireland but I think we’re in the right direction. Next weekend is going to be one of our biggest challenges against Galway.
“They’ll be gunning for us and it’s always a great battle. We’ll be ready and give it our best shot.”