The Mayo ladies make the trip to St Jarlath’s Stadium in Tuam this Sunday to commence their championship campaign by taking on Galway in the Connacht LGFA senior football final (4pm). Michael Moyles’ team are defending Connacht champions after defeating Galway in the provincial decider in Castlebar last August, the last game played at MacHale Park before redevelopment works began on the playing surface. 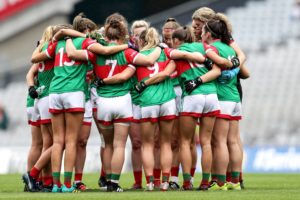 Fifteen of the players who featured in Mayo’s match-day squad for last year’s All-Ireland SFC semi-final clash with Dublin have not appeared in the Green and Red so far this year.

The Connacht final is effectively a standalone game in the ladies championship. Both Mayo and Galway will be drawn into the group stages of the All-Ireland senior championship, which comprises thirteen counties and begins in early June. But as they are the only two senior counties in Connacht, the old rivals will first meet to sort out provincial bragging rights before turning their attentions to the All-Ireland series.
That’s not to say there is nothing on the line here, however; alongside the obvious aim of winning a Connacht title, the winners on Sunday will earn the right to be top seeds in the draw for the All-Ireland series, while the losers will be second seeds.
As an aside, there is an innate advantage to the two Connacht teams in this system, with both guaranteed to be either first or second seeds in the All-Ireland draw before a ball is kicked in anger, while counties from Munster and Ulster (both provinces have four teams at the senior grade) will potentially be third or even fourth seeds should they lose a provincial semi-final.
Mayo come into the Connacht final on the back of a positive league campaign. They claimed maximum points from their three games in Division 1A, including a commanding 6-6 to 2-8 win over Galway in their Round 2 match in Tuam back in late February. Mayo then lost out to eventual league champions Meath in their semi-final meeting in Navan in mid-March.
Mayo delivered a strong league campaign despite a massive degree in turnover in the playing corps. Of the match-day panel of 26 players which featured in Mayo’s last championship game of 2021, the All-Ireland semi-final defeat to Dublin at Croke Park, as many as fifteen have yet to see a single minute of game time for the county this year. That Mayo were able to post league wins over top-tier sides like Galway and Donegal despite more than half of last year’s championship squad being unavailable is a promising indication of the depth of talent Moyles is cultivating in his panel.
That depth will be needed after Moyles confirmed this week that only one of the four players from last year’s panel who went to play in the AFL this year will be returning for the championship, that being Rachel Kearns. None of Sarah Rowe, Grace Kelly or Niamh Kelly will play any part for Mayo in 2022. 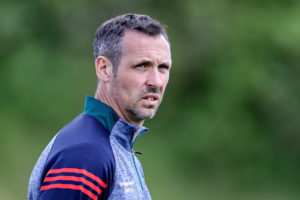 “The way the season has gone in the AFL, their season has changed, so they’re under contract in June. So they can be pulled back for pre-season in July,” explained Moyles of the situation. This year’s LGFA senior championship will run from May to July, with the All-Ireland final fixed for July 31.
“We had to get confirmation that if they were coming in, they’d be in for the championship, or else it’s broken up. So we just have to concentrate on what we have and they couldn’t commit for July.
“It’s three of the starting forwards from last year, but that’s just the nature of the beast. The girls had to make a decision and it hasn’t been an easy decision. They worked really hard to try to make it work, but we’ve set standards for ourselves that there’s a minimum requirement and we need anyone that’s coming in to be here for the whole championship and that hasn’t happened.”
It’s a similar situation with Dayna Finn, who started at full-back in last year’s All-Ireland semi-final against Dublin but isn’t included in this year’s championship squad on account of two of Mayo’s championship games clashing with her Irish basketball training camps.
Moyles has called four minor players into his senior squad to replenish the playing stocks. They are Sinead Walsh from MacHale Rovers – the breakout star of Mayo’s National League campaign – Sorcha McCarney of Westport, Jenna Mortimer of Hollymount and Ciara Nyland of Davitts.
“That’s what we have to do, we have to build for the future,” he said. “It’s unfortunate that we don’t have the girls who are eligible to play for Mayo because of different sports but we just have to concentrate on what we have.”
Mayo will also be without the experienced McManamon sisters of Burrishoole, Clodagh and Ciara, for the championship as they continue to recover from long-term injuries. Moyles said Mayo are carrying a panel of 29 players for the championship and he expects a clean bill of health heading into the Galway game, providing some small niggles clear up in time.
Reflecting on the National League season, the Crossmolina clubman said he had been happy with how a relatively inexperienced Mayo side had accounted for themselves. 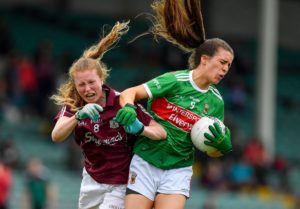 “We had a fairly new group with us, so it was entering a bit of the unknown in the league,” said Moyles. “We met a Galway team that was a bit unsettled with players coming back from the clubs. I was happy with the win over Donegal, and then we learned an awful lot against Meath, both about ourselves and how the game has progressed.
“We were disappointed because we felt we were in that game for long periods, but silly mistakes probably cost us the game.”

Galway will be restored to their full-strength for the Connacht final, with as many as a dozen players from the All-Ireland Club SFC champions Kilkerrin-Clonberne having re-joined the county squad after missing out on the league.
“Galway have their full core back from 2019, the year they got to the All-Ireland final. They’re fairly stacked this year, which is great, it’s a good barometer for us going into the All-Ireland series. We’re looking forward to it,” offered Moyles of this weekend’s opponents.
“We’ve played them three times in the last 12 or 14 months and beaten them three times. So we’re looking forward to the Connacht final to see where we are. When they have the quality like they have back in with them, there’s nothing like that for experience.
“When you play quality teams like Dublin, Meath and Galway, that’s where you pick up our learnings.”