Students in a Ballinrobe school are assisting their teacher in filling an artic truck full of supplies which he will drive to Ukraine later this month.
Two students of Youth Reach in the town decided they wanted to play their part in helping those in war-torn Ukraine who had lost their homes and livelihoods and reached out to their metalwork teacher, John Lavin, who will drive the truck close to the Ukrainian border, leaving Ballinrobe on May 18 next. 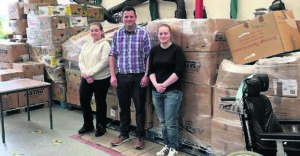 Teacher John Lavin is pictured with Youth Reach Ballinrobe students Weronika Gruszka and Kristija Seke with some of the items which will be delivered to refugees in Ukraine.

The teacher who has been part of the staff in Ballinrobe for the past six years is no stranger to providing aid assistance to countries in need. In 2015, he drove a truckload of shoeboxes to Belarus while he took up the mantle again in 2017, by travelling to Moldova.
Speaking to the Western People, 20-year-old Leaving Cert students, Kristija Seke and Weronika Gruszka who are living in Ballinrobe said they are overwhelmed at the response to their appeal.
“From the start the whole school got behind us, from the students to the staff as well as the people of the town. Ballinrobe is very well known for helping out many different charities with aid, etc. So we came together and set up the appeal.”
As we stand in the collection room, hundreds of boxes are stacked up against a wall containing food, clothes for all ages of men, women and children, medical aid, nappies and items for babies. They have also collected a total of 30 wheelchairs and 32 zimmer frames which stand waiting for packaging.
“We drew up posters and put the word out about our collection online,” said Weronika, who added they have people calling to the school daily with bags of supplies. “We sort the clothes and items into different boxes.”
John explained: “The artic truck is being loaned to us by Joe Murray Transport, Elphin, Roscommon,” while he won’t be travelling alone. “When I was returning from Muldova on my last trip, I met a Galway man in Hungary while I was swopping over a truck. He said if I was ever going again to let him know so I contacted him a few weeks ago and he is going to travel with me.”
Once they get to Poland, they have made contact with two Ukrainian men who are travelling back and over the border in two vans who will take the supplies directly into the bomb shelter to the women and children who need them.
The girls have said it is brilliant that a teacher from the school will ensure the goods get to where they are desperately needed. “It’s fantastic that John is giving of his time me make the trip.”
The students are asking for donations of tinned foods, breakfast cereals, long shelf-life milk, frying oil, rice and pasta, flour, condiments, tea and coffee, biscuits, chocolate, nuts, instant soups, kids fruit and veg pouches, juice in small packs, water, disposable plates, cutlery and cups. They also need hygiene products such as shampoo, nappies, baby wipes and cream, washing up liquid, washing powder and toothbrushes and toothpaste.
Items can be dropped into Youth Reach and Crannmore Day Centre, Neale Road, Ballinrobe between 9.30am and 4.30pm daily or on Saturday, May 14 from 9am to 7pm. Also anyone hoping to make donations of items can contact them on 087 7538385.