Can anything really be done to save Mayo from Aussie poachers?

A Mayo ladies manager speaks about the drain of his players to the Australian Football League:
“It’s very concerning, and it’s going to get worse; within a year I’d say we’ll see 20 top players over there. And that’s going to get higher and higher again if they keep pumping the money into it.
“I think we need to address it. Even if you put a limit on the number of players that can go per team. When you think that we have three of our starting forwards going over next year… Mayo will struggle to contend in Division 1 without three top quality players.
“I don’t blame the girls, they’re getting an opportunity to play professional sport in a foreign country It’s fantastic. But does it reflect on whether we’re giving them enough to keep them attracted here?”
Not the words of Michael Moyles, it should be stated up front. The words of his predecessor, Peter Leahy, when he spoke to this newspaper ahead of Mayo’s Connacht SFC final against Galway in June 2019. 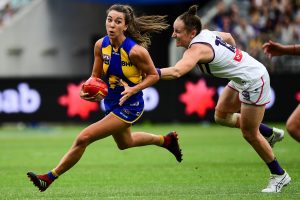 Niamh Kelly tries to evade Kara Antonio of the Fremantle Dockers. Niamh, her sister Grace and Sarah Rowe will all be unavailable to Mayo for this summer’s senior football championship because of their commitments to AFLW teams in Australia. Picture: Daniel Carson/Getty Images

Even his staunchest defenders will concede that Leahy made his share of mistakes in his time in charge of the county’s ladies football team but on this issue at least, the Westmeath native has been proven to have seen the future with vivid clarity.
Because almost three years later, with a two-year global pandemic having come and gone in the meanwhile, the issue of the Mayo ladies being adversely affected by their players going to the AFL has only intensified. Mayo will go up against Galway in another Connacht final this Sunday afternoon and they will do so without three of their most important players. The same three players, as it happens, to whom Leahy was referring when he made those remarks in 2019.
The current Mayo ladies manager Michael Moyles confirmed this week that Grace Kelly, Niamh Kelly and Sarah Rowe are not part of Mayo’s 2022 championship panel.
All three players started in the forward line in Mayo’s last championship match, the All-Ireland semi-final loss to Dublin last August.
The three players are unavailable to tog out for Mayo this year as a direct consequence of the AFLW’s expansion. The league will grow from 14 teams in the recently-concluded 2022 season to 18 in 2023, with all of Essendon, Hawthorn, Port Adelaide and the Sydney Swans having been granted licenses to join the league from next season.
More teams means more games and more games means a lengthened season. Where previously it was possible for Irish players to play football with their counties before travelling to Australia to begin pre-season in September or October, the AFL pre-season will now begin as early as June or July. The LGFA’s inter-county season has been shortened in tandem with the GAA’s for 2022 and this year’s All-Ireland SFC final is set for the last weekend in July, but that still means that a county which reaches the All-Ireland, as Mayo will aspire to, would run the risk of losing players to Australia at the very climax of the season.
Moyles, his management team and the players themselves have tried to find a working compromise in recent weeks but unfortunately, there was none to be found.
“The girls had to make a decision and it hasn’t been an easy decision,” said Moyles this week. They worked really hard to try to make it work, but we’ve set standards for ourselves that there’s a minimum requirement and we need anyone that’s coming in to be here for the whole championship and that hasn’t happened.”
A situation such as the one now facing Mayo has been threatening to emerge for a few years now but this has the feel of a watershed moment. Previously, players have missed the National League but been available for the championship, but this is the first instance of Mayo being without key players for the championship as a direct consequence of their involvement in the AFL.
And the trends would suggest that this is a problem which is only going to become more serious. The AFLW is a young league undergoing rapid expansion and in Irish ladies footballers, clubs in Australia have a rich supply line of talented players who can adapt their ingrained Gaelic skills to the oval-ball code relatively quickly.
Mayo isn’t the only county with players involved in the AFL, it should be said, but it is the county with by far the most players involved. 14 Irish players played in the AFLW in 2022 and six of those are from Mayo. 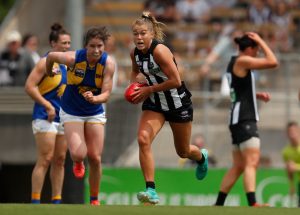 Sarah Rowe of the Collingwood Magpies in action against the West Coast Eagles.

Aside from the Kellys and Rowe, both Aileen Gilroy and Cora Staunton are with Australian clubs, although neither have been involved with Mayo over the last two seasons. The sixth player, Rachel Kearns, has been included in Mayo’s 2022 championship squad, the understanding being that Geelong do not have her placed under the same constraints as Rowe and the Kellys.
Ailish Considine, the Clare native who recently won her second AFLW title with Adelaide, spoke on the Second Captains podcast last month about the dilemma facing Irish AFL players with the shortening of the season.
“It’s going to stop a lot of people getting the opportunity to play both,” said Considine, who herself hasn’t played for Clare since 2018.
“Our pre-season will start in June, that’s when clubs are going to be looking for their players to come back out, unless you have really serious talks with your club and arrange something to make it work. But it’s very difficult and a very big ask for anyone to miss a pre-season and then try to break into a squad, especially with the standard rising year-in, year-out.
“The timing is not going to be ideal for Irish girls who want to play both sports, unfortunately. It will make the majority of girls have to make a decision on whether or not they want to pursue a career in AFL or if they want to continue playing Gaelic football.”
Mayo will need to make the best of things without three of their most experienced players. Moyles has called up four players from this year’s minor squad to effectively replace Rowe and the Kellys in his championship panel but the issue isn’t going to go away. One of those minors, for example, is MacHale Rovers’ Sinead Walsh, who burst onto the senior inter-county scene with some outstanding performances in the National League.
Walsh is still only 17 but the AFL is targeting younger and younger players for recruitment – just last week, Cork’s All-Star Erika O’Shea became the youngest Irish player yet, at 19, to sign up with an AFL club – and who’s to say Walsh won’t be recruited in a couple of years’ time? There is a drastic but very plausible scenario in which the best ladies footballers are routinely scooped up by a growing number of AFL clubs every year, almost like a trans-hemispheric version of the annual NFL Draft.
Eamon Duggan, the manager of last year’s All-Ireland senior champions Meath, drew some heat recently for his comments on the AFLW, describing the game as “dreadful to watch.” Murray’s criticisms of the game of Aussie Rules itself were misguided but he was speaking after recently learning that one of his best players, the 2021 Footballer of the Year Vicki Wall, is set to join the AFL later this year. You could hardly blame him for being a bit sore about the whole thing.
And that’s the underlying point in all this: you can’t really blame anyone. The AFL clubs will recruit players wherever they can, and will want to protect those players as completely as possible once they’re under contract. Inter-county managers like Moyles and Duggan can’t reasonably be expected to run panels including players who could very well be up and gone before the season is even over.
And as Peter Leahy said three years ago, you can’t blame the players themselves. The chance to play professional sport in Australia, to build careers and potentially build lives as pro athletes, is one that must be almost impossible to turn down, or to jeopardise with blind loyalty to an amateur game. 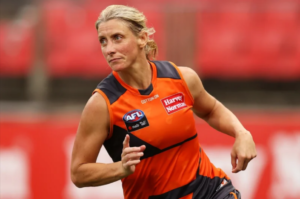 But it does still feel like a huge pity. Sarah Rowe has been a brilliant servant to Mayo ladies football for a decade, since making her debut while still basically a kid aged 16 in 2012. Through ten years in which the going has been rough more often than it’s been smooth, she has been a constant presence at the forefront of Mayo’s attack. The same can be said for both Grace and Niamh Kelly, two of their county’s best players in recent years and in Niamh’s case, a former captain of Mayo. It’s a small tragedy that they won’t be able to wear the green and red this summer. Rowe and Niamh Kelly are still aged just 26, Grace Kelly 28; hopefully something will change in the coming years and we’ll see them play for Mayo again.
But it’s hard, at this juncture, to know what form that change might take. Leahy’s suggestion three years ago of capping the number of players a single county can send to Australia would be effectively impossible to put into practice.
Ultimately the impetus is increasingly on the LGFA at central level to do something here, lest ladies Gaelic football devolve into a farm system for the AFL. The fear, however, is that the horse may have already bolted.