Bruising welcome but Andy keeps out his bright side

As baptisms go, this was fiery. Very fiery. Okay, so technically Andy Moran’s first game as a senior inter-county championship manager was that when Leitrim navigated their way past London in April but there was very much a sense of ‘right, this is where it starts to get real’ about seeing Mayo’s most capped footballer straddle the whitewash at Pearse Stadium last Sunday. And boy did it get real. 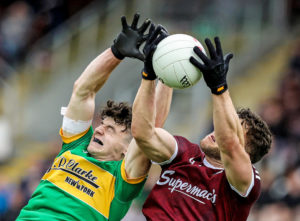 A 23 points defeat to Galway – 4-20 to 0-9 – was just one point less than what Leitrim had conceded to Mayo the season before, in what remains the county’s biggest ever losing margin in championship.
The smartarse might say it shows Andy has brought improvement to Leitrim, the realist might say any county that has lost its last five Connacht championship matches against the non-Exile teams by a combined total of 86 points probably isn’t in need of a manager but a magician.
Keith Barry’s pre-Covid tour was called ‘Deception’ – and that’s just about all Leitrim’s first-half display last Sunday was. 0-5 to 0-4 behind after 21-minutes, the minnows were genuinely playing some decent football, competing very strongly around midfield, affecting some telling blocks on Galway’s shooters, transitioning between defence and attack with impressive speed and but for the last offload, actually looking on more than one occasion like they might prise open a big hole in the home side’s rearguard. But it was all just a smokescreen.
By half-time, the gap between the teams had moved out to seven, 0-12 to 0-5, yet still the consensus among Leitrim supporters was that they were just after watching the best half of football from their team all season.
Quite where the second-half ranks then, it’s hard to know. Or maybe it’s not. With Galway substitutes scoring five points more than what the Leitrim team in its entirety managed for the whole game, the outcome became an awful lot uglier than could ever have been imagined during those opening 35-minutes.
“I was disappointed we only put nine points on the board there. I think we are better than that up front. That would be the huge disappointment for me, outside the fact that we conceded the four goals,” Andy Moran admitted afterwards.
But are Leitrim really much better than what they showed up front?
Six seasons have now passed without them scoring a championship goal against one of the home counties yet against Galway, Mayo (twice) and Roscommon they have conceded fourteen in their four games since 2019.
With Shane Moran and Donal Wrynn ghosting in and out of the full-forward position in the first-half, and Leitrim unshy at dropping high balls on top of them, that most traditional of tactics had at times seemed to genuinely unsettle the Galway full-back line and its goalkeeper. The lucky break the underdog craved just never arrived however, but with the wind at their backs after half-time you’d have expected more route one from the Green and Gold except Shane Moran, surprisingly, never reappeared for the second-half, as his namesake opted instead to introduce Keith Beirne, Leitrim’s top scorer in this season’s National Football League Division Four campaign but overlooked to start last Sunday, which too was very, very surprising.
The Mohill man was actually the second-highest scorer across all four divisions this season and after hitting twelve points against Waterford, including seven from play, his manager remarked: “I had a decent career but there was never a time that I could kick a ball off my left foot and right foot equally. It’s lovely to watch.” High praise indeed from a former GAA Footballer of the Year.
When Beirne, who also hit 1-9 against Carlow, raised his first white in the 45th minute last Sunday, another 24-minutes were to pass before he scored Leitrim’s next point of the second-half. In stark contrast, the longest Galway went between scores throughout the entire game was seven minutes, and this despite some excellent individual displays by several Leitrim defenders, including Donal Casey who held Galway’s full-forward (and Man-of-the-Match against Mayo) Damien Comer totally scoreless, and Conor Reynolds who through his rash-like marking of Shane Walsh restricted the talismanic attacker to just one point from play. And yet still the Tribesmen were able to score so heavily, five points coming from midfielders Cillian McDaid and Paul Conroy alone, and the goals struck by Patrick Kelly, two, Niall Daly and Owen Gallagher, all of whom were sat on the bench at throw-in. 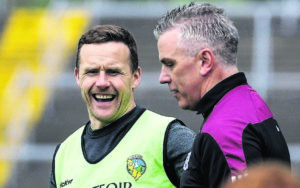 Andy Moran finds time to smile in the company of Galway manager Padraic Joyce. Moran’s Leitrim team suffered a 23-points defeat at the hands of the Tribesmen. Picture: INPHO/Lorraine O’Sullivan

“Let’s call a spade a spade, the quality Galway possess coming off the bench, the goals they got, that’s Division One football right there,” said Andy Moran whose players tired dramatically after their first-half toils.
“I wouldn’t put it down solely to physical condition. I think mental condition, being in that position, playing against that level of intensity, the Galways, Mayos, these guys are coming at you for 77 minutes non-stop. To keep that pressure on for that length of time is very tough. Physical condition, mental condition, stuff that you can improve, that’s what we can work on.”
And work they will, of that you can be sure. Andy Moran has too much natural enthusiasm and has recovered from too many painful defeats to allow one game define his first season in inter-county management. Indeed when another manager might have slunked back to their seat long before the final whistle, the man who as a player scored 2-12 in twenty league and championship appearances against Galway had to be admired for how he was as vocal in the 69th minute as he was in the ninth, still living every last kick of the ball. Moran knows there remains a bigger picture for Leitrim and with the new Tailteann Cup to come, he compared Sunday’s loss to experiences he had of losing league finals as a player with Mayo and then having to prepare for championship in a matter of weeks. 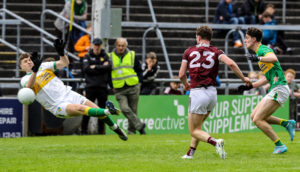 “[The defeats] were really disheartening and we struggled to lift then after that so we are learning here now, aren’t we? You just go away and see where you are. The boys do see though that in the first-half they were competitive when they could live with the physical pace of the game.
“There are positives. You have to look for them but they are there. And I think you can see green shoots and maybe I might have thought we could get there faster than what was realistic but I still think we can get to where we want to get to and the great thing about this is we have another opportunity to go and play another game in three weeks’ time.”
The sobering experience at Pearse Stadium on Sunday won’t alter the expectation that Andy Moran will be among the nominees to become the next Mayo senior football manager, whenever it is that vacancy next arises. But whether Leitrim is the making of him, only results will tell.