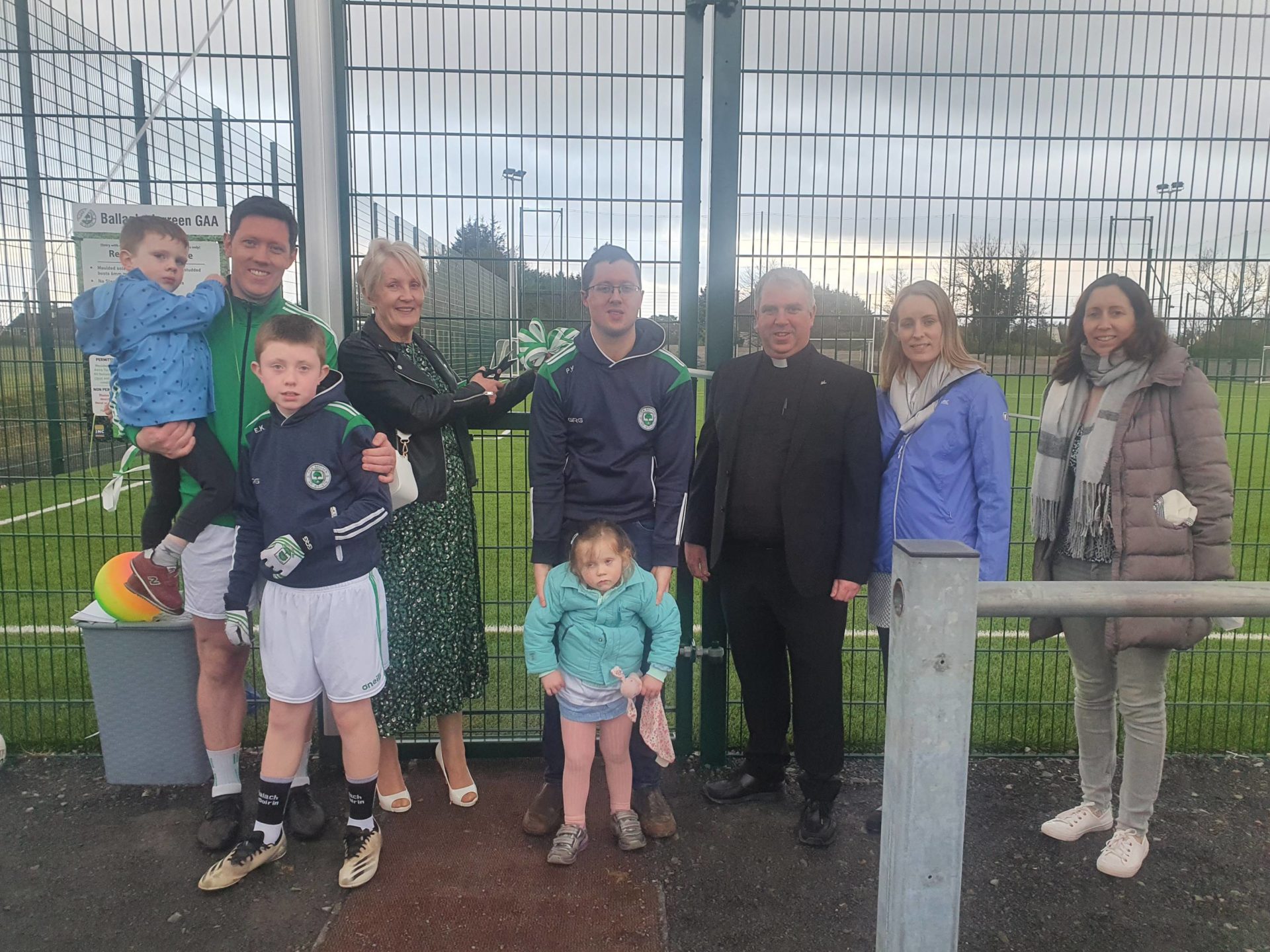 The great and the good of Ballaghaderreeen GAA club congregated at the club grounds recently for the official opening of the new Frank Kelly Memorial Training Pitch. The new facility is a 60m × 40m state-of-the-art astroturf playing surface which will allow all of the East Mayo club’s teams, from the under-8s all the way up to the seniors, to train in comfort all through the year.

The new astroturf has been in use for a while already but Covid-19 restrictions meant this was the first opportunity for the club and the community of Ballaghaderreen to gather together and officially christen the facility in memory of one of their greatest clubmen, the late Frank Kelly.

Frank, who passed away in 2017 after a long battle with illness, was the beating heart of Ballaghaderreen GAA for decades. Those who spoke of Frank at the unveiling of the plaque – which bears his name, mounted high at the gates of the new facility – described how he was involved in every layer of the club, from developing facilities and coaching the underage sides to managing the senior team to the Mayo senior championship title of 2008, having been a player on the Ballagh’ side which claimed the club’s first-ever Moclair Cup victory back in 1972.

Club chairman, Fr Paul Kivlehan, told the huge numbers in attendance at the official opening that it was natural and organic that the club name its new astroturf facility in honour of Frank Kelly, who, he said, would have been delighted that such a facility was available to the young players of the club.

Fr Kivlehan extended his thanks to all those who had aided in the fundraising efforts for the new facility, including those who had helped in last year’s car draw, the proceeds of which, alongside a sports capital grant and funding from the National Lottery, had helped to make the astroturf possible. He especially thanked the club’s two development officers, Noel Regan and Andy Moran, for their work and leadership in making the facility a reality.

Noel Regan explained that the new astroturf is the first step in a five-phase plan for the expansion and development of the club grounds, the next being a 700m lighted running/walking track which will loop right the way around the edge of the grounds and provide a safe space for people to walk in the winter months.

Peter Kelly, who spoke on behalf of the Kelly family at the unveiling, outlined some of the improvements which have already been made at the club grounds over the last decade, including the laying of a new main playing pitch, the upgrading of the training pitch, the renovation of the clubhouse and the installation of a modern gym. The new astro, he said, is just the latest step in a development process which will make Ballaghaderreen the envy of other clubs around the country.

John Murphy, the president of the Connacht Council, said that Frank Kelly had been an example of the kind of volunteer who keeps clubs like Ballaghaderreen alive and thriving. Murphy said that the success of the GAA across Ireland is built upon the work of clubpeople like Frank whose work, while often going unseen and unrecognised, is integral to the health of our local communities and lays the foundation for all that is good about the association.

The rude health of Ballaghaderreen GAA had been in evidence earlier in the evening as hundreds of boys and girls from the club’s thriving underage ranks took part in exhibition games on the new astroturf pitch. Presentation ceremonies were then held to mark some of the club’s recent underage successes, including the under-16 team which claimed the East Mayo A title two weeks ago. They were presented with their medals by two of the club’s Mayo stars of past and present, Andy Moran and David McBrien.

Frank Kelly’s wife Goretti took the opportunity to say how proud and delighted the Kelly family were to have the new astroturf named in honour of Frank. She described how the GAA had been a constant presence in their life and the lives of their children, Michelle, Lorraine, Barry, and Peter.

“The GAA brought us all around the county with Ballaghaderreen and all around the country following Mayo and Galway,” said Goretti, herself a native Galwegian. “The club was such an important part of Frank’s life and I know he’d be very proud to have this new pitch here for all the young players in the club to use.”

Goretti spoke also of how Frank had become involved with the Kilmovee Shamrocks ladies club, which was also strongly represented by underage players on Sunday night. She told of how it had taken Frank some time to get accustomed to the differences between coaching men and women.

“He didn’t realise at first that girls might have other things going on in their lives,” laughed Goretti, “but over time, he came to have just as much admiration for and dedication to the ladies game as he did to the men’s.”

Bishop Paul Dempsey, the Bishop of Achonry, then performed the blessing of the new astroturf and officially opened the facility with Goretti by cutting the ribbon and unveiling a plaque bearing Frank Kelly’s name and image. Bishop Dempsey said it was right and fitting that future generations of Ballagh’ footballers will hone and develop their skills using a facility which carries the name of a man through whose hands helped countless young players over his decades of work and commitment to the club.

With the formalities at an end, there was time to break in the new astroturf pitch properly, and what better way to do so than with an exhibition match featuring some of the best Ballaghaderreen footballers of years gone by. So it was that roughly a dozen of the club’s players who have represented Mayo at inter-county level took to the new surface for a kickaround.

The likes of Andy Moran, David and Stephen Drake, James Kilcullen, Barry Regan, and Barry Kelly, all of whom were part of Frank Kelly’s county title-winning team, all took part, alongside a few players of a more mature vintage including the great Kevin Cahill and Pat Fleming. The pace of the play may not have been quite as breakneck as it was back in their glory days with Ballagh’ and Mayo but if some of the more spectacular efforts on goal were anything to go by, there’s life in a few old dogs yet.

The night concluded down the town with a social in Durkin’s and an opportunity for the club community, which has been unfortunately denied the chance to gather together in such strong numbers for the last two years due to Covid-19, to reconnect and reminisce about the great days of the club’s past, so many of which bear the fingerprints of the late, great Frank Kelly.

Clubs like Ballaghaderreen right around the county, and indeed all over the country, are constantly battling to preserve and safeguard their own futures. Nothing comes easy, especially when factors like rural population decline and the emigration of young people are taken into consideration.

But the gathering was a timely reminder of the strength of clubs such as Ballagh’ in drawing communities together and binding them with a shared ideal. Club stalwarts like Frank Kelly, whose name will forever be displayed proudly at the club grounds, are the personification of that ideal.