Players just put venue row to the back of their minds, says Walsh

Mayo manager Derek Walsh insisted that the high-profile row which erupted between the hurling camp and the County Board last week over the availability of MacHale Park hadn’t hindered the focus of his players before their hard-fought Christy Ring Cup Round 4 win over Sligo in Ballina last Saturday afternoon. 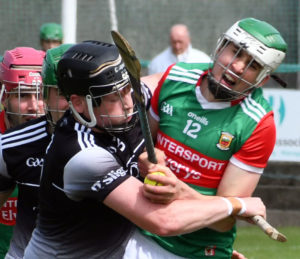 Mayo came from three points down early in the second half to win by seven, claiming a third consecutive championship win and leaving themselves within one more victory of a place in the Christy Ring final. They will take on Derry in a winner-take-all Round 5 clash this Saturday (1pm, Hastings Insurance MacHale Park).
The build-up to the game had been dominated by a dispute over the use of MacHale Park; the hurling camp accused the County Board of “blatant discrimination” for their refusal to allow the game against Sligo to be played at the county ground, even as the county senior football team were allowed to train on the new surface last week.
But speaking after his side’s win, Walsh said that his players had been able to put the row to the back of their minds and concentrate on the task of beating their Connacht rivals on Saturday.
“To be honest it wasn’t a distraction during the week at all, for me or the players. We spoke about it Tuesday night at training, we discussed it and that was it parked,” said Walsh.
“We had a job to do and that’s the way it had to be, we couldn’t get involved in the whole circus that was going on outside of our bubble. It’s a decision for the County Board.
“There wasn’t a mention of it in that dressing-room today. There’s no point. The County Board made the decision they made. We’re all adults, we’re men enough to talk about it. We discussed it and that was it parked.
“The powers-that-be make these decisions and wherever that game is next Saturday, we’ll be there.”
It was subsequently confirmed by the County Board that the game against Derry would be moved to MacHale Park, following on from what was described in a statement from Mayo GAA as “emergency and recommended remedial works “ on the playing surface in Castlebar.
Walsh was in Owenbeg last Sunday to see Derry defeat London by 3-14 to 1-14 to set up a winner-take-all clash with Mayo this Saturday.
Mayo had been second-best for long periods of the first half against Sligo and could probably have counted themselves lucky to be just a point down at half-time.
The concession of a sloppy goal early in the second half was a blow but Walsh’s men rallied impressively, two goals in the space of three minutes from Keith Higgins and Kenny Feeney setting them on their way to the win.
“Delighted with the second half, frustrated with the first half,” was Walsh’s overall assessment.
“We knew after having the week off that we would be a bit flat and that’s the way it worked out. We thought the rest was the best thing for us but sometimes when you get rest, it’s counterproductive.” 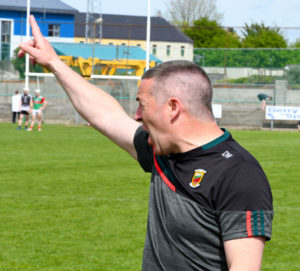 Derek Walsh has steered his Mayo team to within one win of reaching the Christy Ring Cup final. Picture: John O’Grady.

Mayo have turned their season around dramatically in the last three games. After relegation in the league and a Round 1 hammering at home to Kildare, consecutive wins over Wicklow, London and now Sligo have them within one big performance of reaching a Croke Park final.
“Credit to the lads like, we had a tough league. There’s no point glossing over it. It was a struggle to keep going week-to-week, trying to get lads back and all that”, said Walsh of those early-season struggles.
“But the lads never shied away from it, they just kept going and going. We’re on top of the ground now looking forward to basically a semi-final next week.
“We knew Kildare were going to be a tough assignment no matter when we played them. It came at the wrong time in some ways and a good time in other ways, because we wanted to win two games from the first three. We didn’t really concentrate too much on the Kildare game.
“That was the plan. We went down to Wicklow and got a win, went to London and got a win and had a good time over there. The lads have worked hard,” he said.