Mini-Marathon makes triumphant return to the streets of Castlebar

The annual Mayo.ie Western People West of Ireland Women’s Mini-Marathon made a triumphant return to Castlebar last Sunday for the first time since 2019.

There was an air of excitement at the Mall as the west’s flagship women’s sports event was back after being held virtually for the past two years due to Covid. 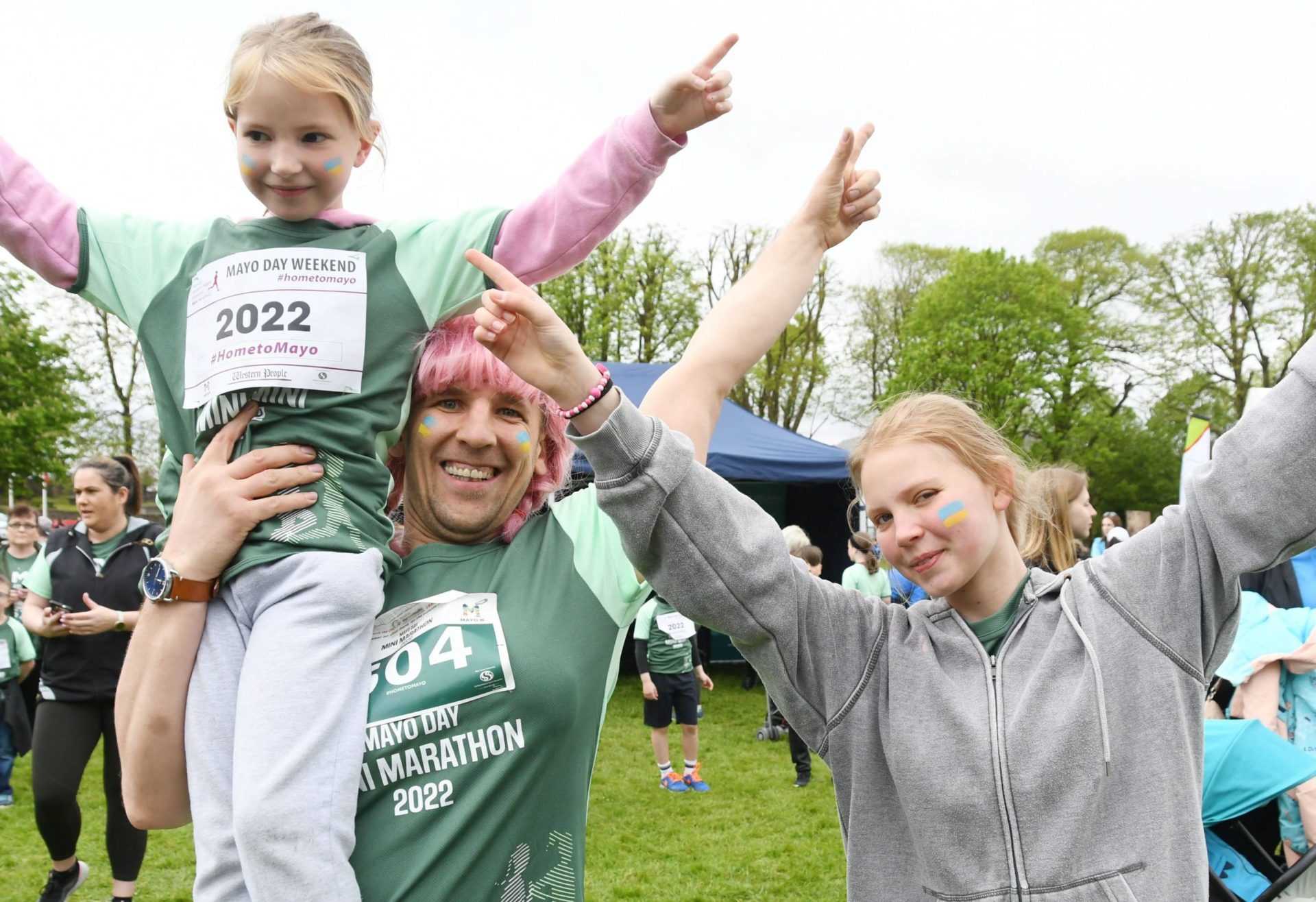 Former Midwest Radio broadcaster Angelina Nugent was the MC on the day, and her energy, humour and professionalism raised everyone’s spirits as they limbered up for the race.

Since 2010, the popular event has raised over €1.5 million for local charities and nearly 30,000 people have taken part.

Although it was largely overcast on Sunday, thankfully, the rain stayed away.

Over 1,000 people took part in the 10km event, with 200 from abroad taking part virtually. Over 800 children racing in the ‘Mini-Mini’, which was a 2km route around the streets of Castlebar. It was also heartening to see so many Ukrainians there on the day with over 35 taking part in the main event and over 45 children in the ‘mini-mini’.

Aidan McNulty, Commercial Manager, Western People, expressed his delight at the success of the mini-marathon.

“We are very proud to be involved in this event since its formation in 2010. The fact that this event has raised so much money for local charities and it is particularly a difficult time for those organisations with the cost of everything rising.

“Today was a very emotional day because there was people running out there in memory of loved ones who passed over the last two years. It was also fantastic to see so many Ukrainians here.” 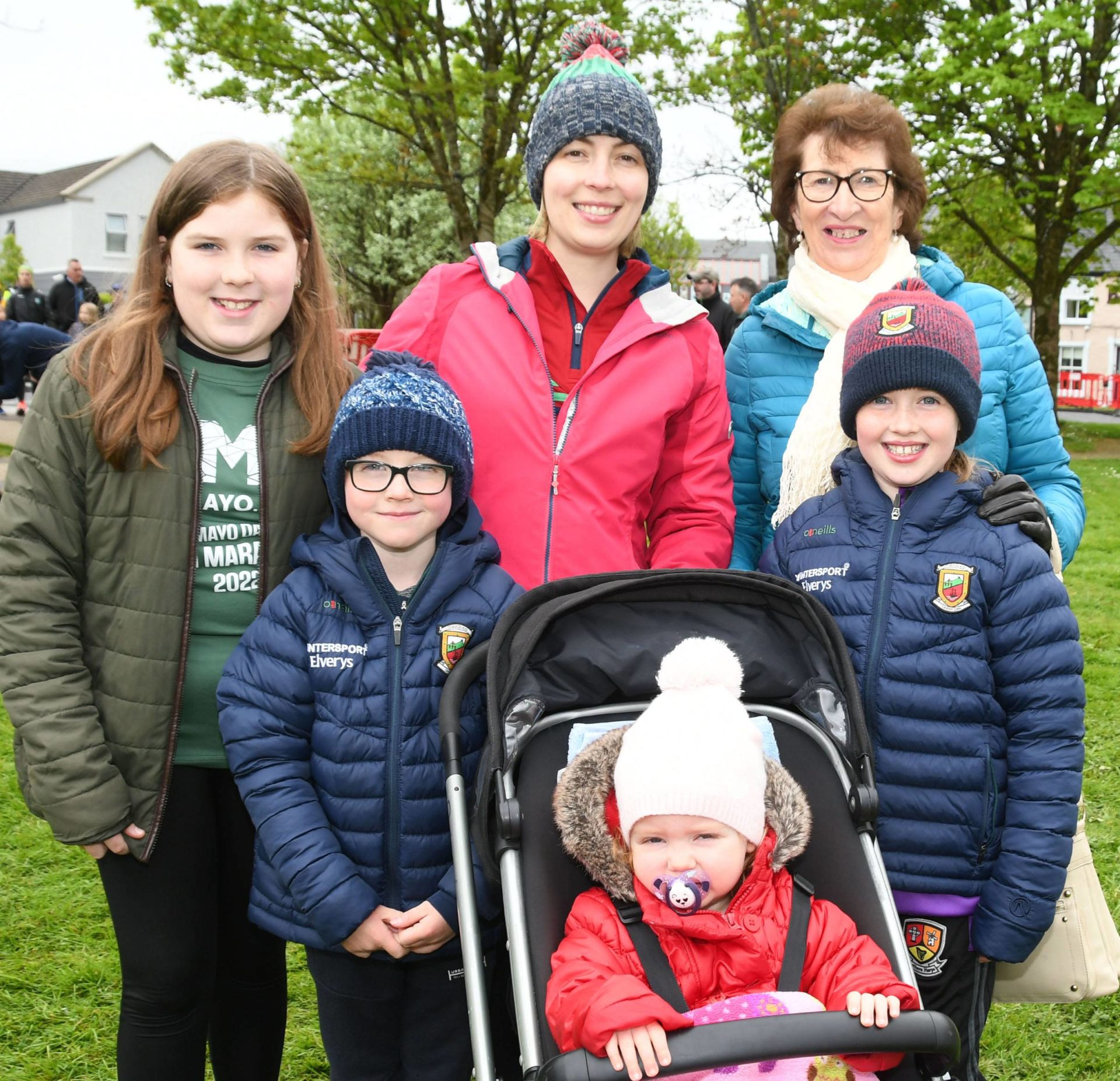 Pictured at the Mall in Castlebar ahead of the West of Ireland Women’s Mini-Marathon were, back row: Aoibhín McNicholas, Elaine Rochford, Mary Walsh. Front row: Dylan, Jessica and Amber Rochford. Picture: John O’Grady

Charlie Lambert, Head of Mayo Sports Partnership, which organises the event, was delighted with the turnout.

“It’s hard to believe that it’s 2019 that we were last here physically on the Mall. Today was fantastic to see everyone back, it was a great turnout and you couldn’t have asked for a better day and things went off great,” Mr Lambert said.

“It’s all down to the volunteers from the clubs, the staff that we have in Mayo Sports Partnership, everyone from Mayo.ie and the Western People and all our partners and stakeholders that have come to together to make this event what it is.

“We made a special reach out to the Ukrainian community and it was great that they all came because you could see what it meant to them when they crossed the finishing line. I’d say they were thrilled to be in this type of environment.”

Most runners choose a cause to raise money for, with some raising a significant amount of money for local charities.

“My daughter has a rare condition called Joubert Syndrome, so we’re running it for the NFSN because they help families with rare conditions. It’s a genetic disorder and it affects her brain, she is going to be a year next month, but she is doing great. We have done this event before, but it’s the first time we have done it for a cause,” Ms O’Dowd said.

“I just can’t wait to get to the finish line!” Ms Lally said laughingly. 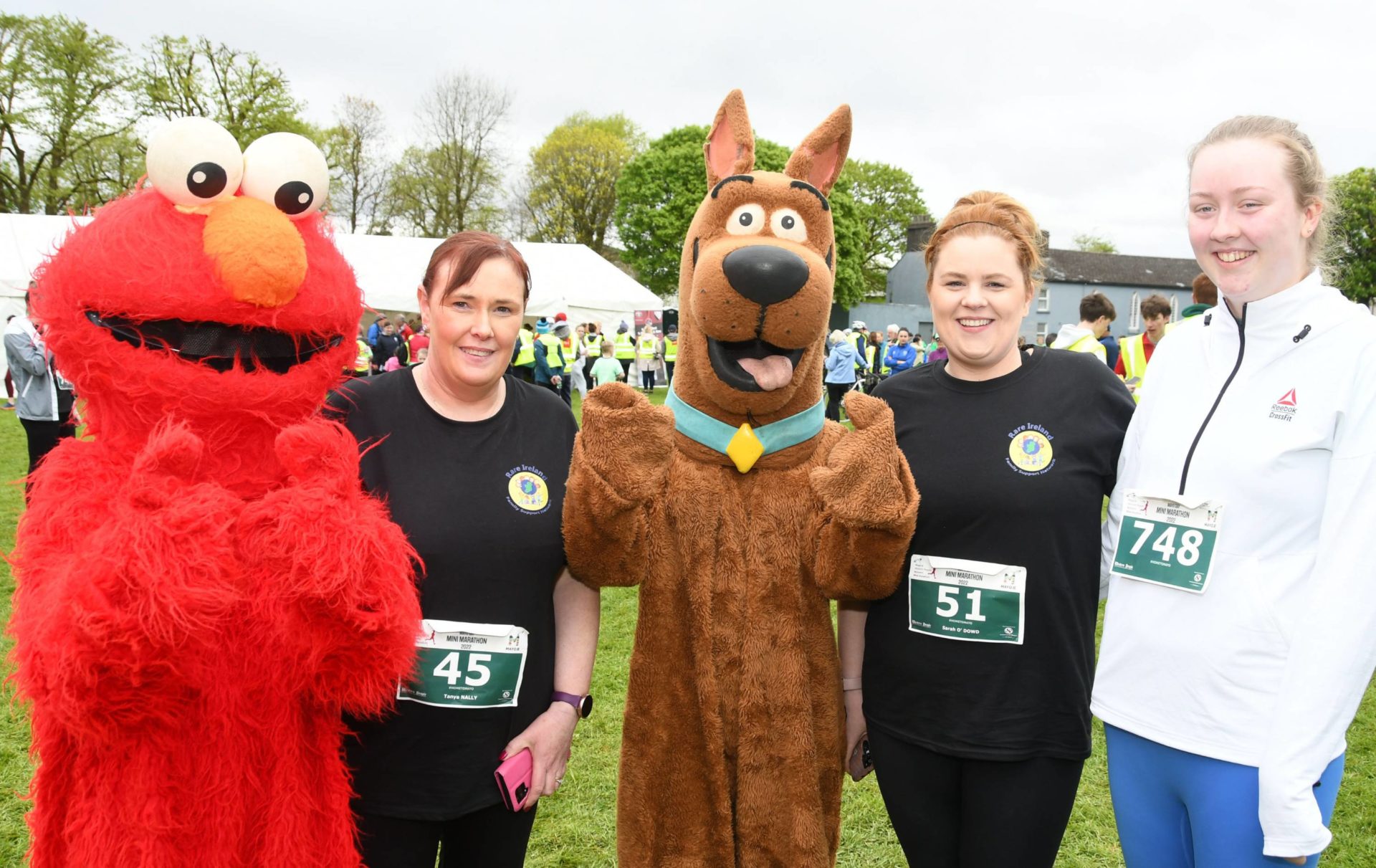 “This is our first one but I took part in the Pink Ribbon cycle yesterday (Saturday) and one pre-Covid,” Ms Canty said.

“We have been practicing three years now, so we are ready to go!” Ms Munnelly laughed.

Students and teachers from Sacred Heart School in Westport ran and raised significant funds for Mayo Roscommon Hospice in memory of Hannah Keane who passed away earlier this year.

Louisburgh native Geraldine Butler became the first ever para-cyclist to compete in the event as she cycled the entire 10km on a hand-bike.

“During the lockdown, I start cycling around parts of Louisburgh and I decided to take part in an event like this. There was a lovely girl, her name was Marissa O’Donnell and she helped push me up Knockthomas Hill because I thought that it was a killer. I really appreciated that,” Ms Butler said.

“My father contracted with polio when he was teaching over in Nigeria and he endured post-polio syndrome in later years, so I donated some of my fee to the Polio Fellowship of Ireland.”

Two young men, Valentyne Omelianets and Roman Serohin, both from Ukraine, attended the event and are enjoying their time in Ireland. They are both from the same town near the Black Sea but didn’t know each other prior to coming to Mayo.

“We live in Breaffy Woods Hotel and we have a lot of activities like soccer, Gaelic football and hurling. We like Gaelic football but it’s strange using your hands, in Ukraine we never saw this sport,” Mr Omelianets said.

The West of Ireland Women’s Mini-Marathon was the conclusion to a great weekend in Mayo, as the county celebrated Mayo Day with live music on the Mall and hundreds took part in the Pink Ribbon cycle on Saturday. 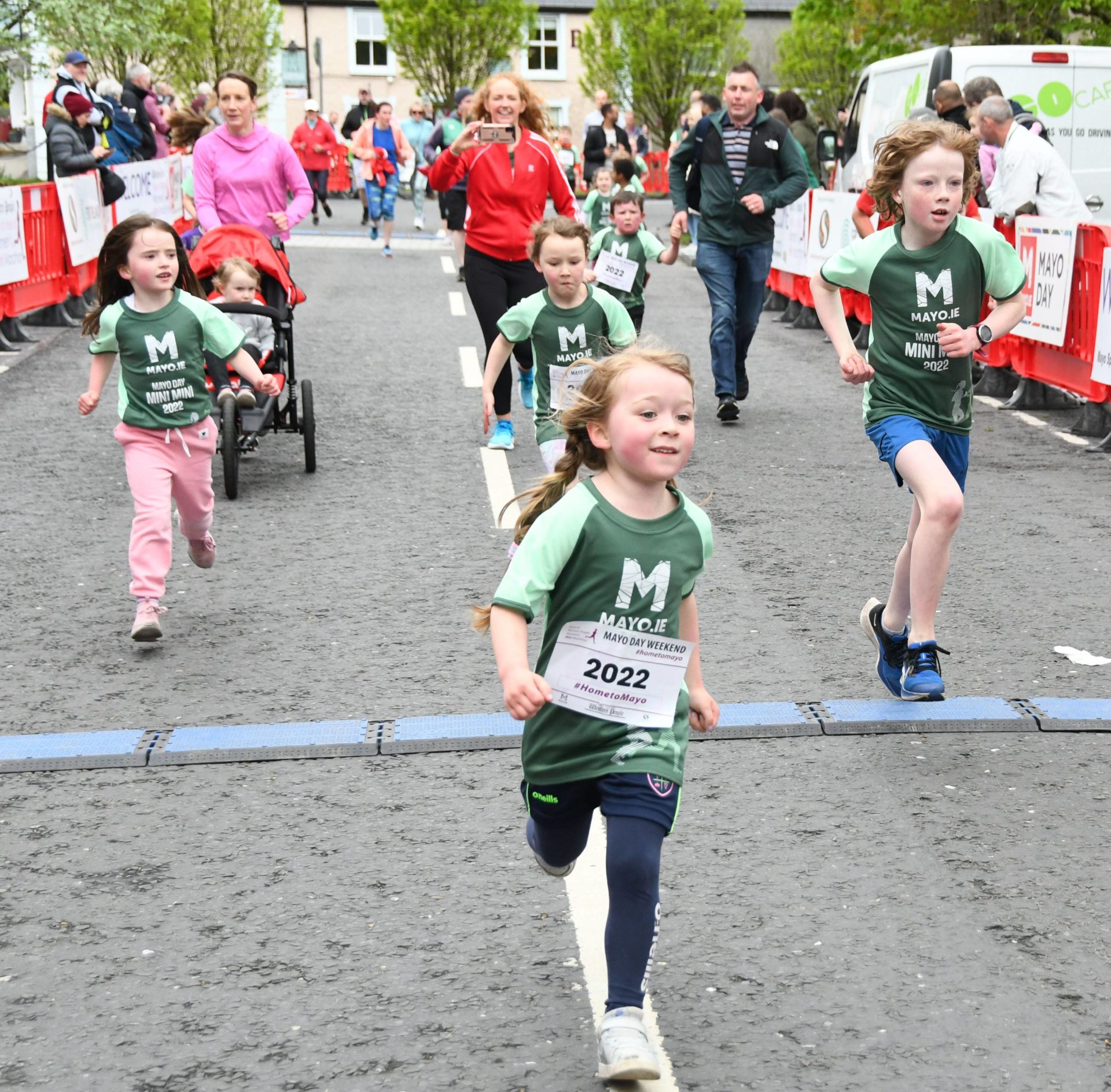 Youngsters crossing the line at the end of the mini-mini event at the Mall in Castlebar. Picture: John O’Grady