Where to now for Mayo’s season? As disappointing as the defeat and performance against Galway was, the six-week gap between fixtures is giving gives players and management some time for recuperation, reflection and fresh thinking. 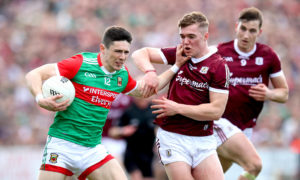 Last month’s vexing loss does not signal a crisis in Mayo GAA that requires any major autopsies. Players do not need to engage in any deep process of soul-searching. A few minor tweaks to personnel and tactics can see Mayo come back stronger and poised to launch another major assault on the All-Ireland series in June and July.
If Mayo were to meet Galway again later in the championship I would still be confident that we would beat them. The late comeback will also have sown some seeds of doubt in Galway minds about how much better than Mayo they actually are. It would have been hard to come back from a hammering and this was anything but that. For all of Galway’s good play and Mayo’s subpar showing, there was still only a solitary point in it at full-time.
And to put a really positive spin on proceedings, Mayo will end up in the exact same stage of the All-Ireland series by winning two qualifiers as they would have by beating Leitrim and Roscommon to win Connacht. Furthermore, if Mayo dispose of strong teams such as Armagh or Clare or Tyrone in the back-door, there will be a very buoyant, bullish mood in the camp ahead of an All-Ireland quarter-final – even more so than if we were to routinely capture another Connacht title.
After an intense four-month spell since the start of the National Football League, a few weeks away from the intercounty setup will do everyone the world of good in order to regenerate minds and bodies. Ideally, the intercounty players would have gone back to their clubs for a few weeks and play two or three matches. Going back to the local team, getting back amongst your brethren and being top boy for a few games would be as therapeutic as any team meetings or sports psychologist sessions James Horan and his management team could provide.
I’m not really sure why the club leagues have not yet started in Mayo. What are the county board waiting for? Why have Mayo club players been twiddling their thumbs for the past two months? In Galway, we have four rounds of the league completed and every club footballer is buzzing with the prospect of a high-quality game every fortnight. From talking to acquaintances in counties like Roscommon, Dublin, Donegal and Westmeath, I have learned that they are also knee-deep in club action. What is the thinking behind Mayo’s summer league? Of all years, after a few years of Covid-enforced inactivity, club footballers are desperate for action. What’s more, having a summer league in Mayo in a year when there will be mass emigration of young men to the USA on J1 visas seems ludicrous. I know we are in uncharted territory with the new split intercounty and club seasons but this issue is something that needs to be reviewed and corrected for future seasons.
Alas, without club football matches to reenergise his charges, James Horan will have to get creative when trying to get Mayo’s season back on track. The first way Mayo can get better is by getting the best of the personnel at their disposal i.e. having the best players on the pitch in their best position. I waxed lyrically about Paul Conroy’s kicking ability last week and I would like to see Mayo get some accurate, long kickers in their team too, particularly in the middle-third. Jack Carney can kick, as can Kevin Mcloughlin. Both of these were introduced late on last week and made a positive difference and should start the next day out. Unfortunately, Jordan Flynn, one of Mayo’s best kick-passers, is struggling with injury but Carney led Kilmeena to All-Ireland glory from midfield and should be trusted with that responsibility alongside Matthew Ruane for the remainder of the season.
Two of the best kick-passers I have ever played with are on the Mayo management team. While I didn’t play a huge amount with Ciaran McDonald, everyone knows about his credentials as probably the greatest kicker of the modern era. I did play a lot with James Burke and I used to love receiving passes from his cultured left boot. What is it about lefties and their passing wands? Burke was a brilliantly accurate, direct and clever kicker from the half-back line. 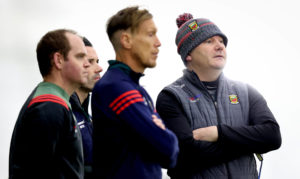 Surely, with the pair coaching the players, this Mayo team can look to implement a more progressive, adventurous long game rather than the safety first, sideways fare that we have seen too much of lately. The time for safety and caution is gone. It has seen us fall short too often in recent seasons. Every team needs safe, reliable and functional players but we do not need them in the middle of the park when trying to break down mass. In my mind, safe players could do a very important job further back the field in defence where you need to destroy, get tight on your men, close space and track runs. It’s time to get our creators, line-breakers and game-changers to the middle of the park where we are currently running low on ideas and inspiration.
With that in mind, we also need to free Lee Keegan from the full-back line. We know he can spoil the best of players in the land but he is too good to be just a destroyer.
For a team that struggles to score goals on the biggest day, we can no longer afford to station a guy who has amassed 2-04 from play in All-Ireland finals so far from the honeypot. I really like Ryan O’Donoghue in the full-forward line as his tackling intensity and tenacity sets the tone from the frontline but I am beginning to wonder if this teams needs his inventiveness and penetration further out the field. In spite of looking sharp and threatening against Galway, I felt he was wasted inside as Galway clogged up the channels and Mayo moved laboriously with the ball further out. With Cillian returning and James Carr going well in the full-forward line, maybe it’s time for ROD to return to 11, a place where he performed so devastatingly in Mayo’s run to the 2020 final. Interestingly, Monaghan named Conor McCarthy, one of their most creative and skillful forwards, at number 7 against Down at the weekend. It’s a fascinating move by the Farney County. Half-backs and midfielders get most touches of the ball nowadays in GAA so it makes sense to have your most probing and incisive players in those positions, getting their hands on the ball most often and dictating the style of play from further back.
Of course, the six-week break could also be a blessing to help some of Mayo’s most important players return to fitness. Cillian and Diarmuid O’Connor looked very lively in the opening exchanges last weekend but probably tired later on. Another month of football will get them right back up to speed. And if you’re looking for line-breakers, then look no further than Paddy Durcan, one of the game’s most piercing runners from deep. He should be back and flying for the next phase of games.
All hope is not lost on Mayo’s season. Once the qualifiers begin in early June, fixtures will come thick and fast so the squad and management need to freshen their minds and bodies and come back ready for one hell of a drive to rescue the season. However, everyone involved in the Mayo setup cannot simply return to camp and try the same old things and expect different results. There are two options for this Mayo: adapt or die.