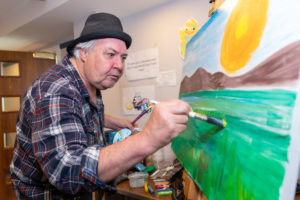 A Ballyhaunis artist has brought joy to Ukrainian children by organizing art classes.

Johnny O’Shaughnessy is well-known in East Mayo and said the classes, which he recently hosted in Claremorris and Ballinlough, have taken the children’s minds off their troubles for a couple of hours.

Born in Coolock in Dublin, Johnny has spent the majority of his life in Mayo where his mother, Annie May Nolan, is originally from. “We came down on holidays regularly when I was young and when I was 14 I moved down to Ballyhaunis and went to school here, I loved it that much!”

His parents eventually sold their Dublin home once they had both retired and moved to Mayo to join his uncle, who ran The Lantern Pub.

A talented musician and artist, Johnny was a member of local band ‘Reflex’ while his father was also a very talented fiddle player. “Of my 14 nephews and nieces, 12 are now in bands,” said Johnny. 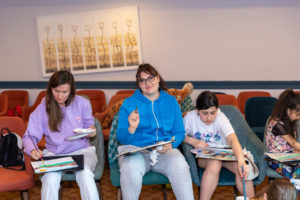 But it is for his artistic work that Johnny is better known in East Mayo with his work on display throughout many walls, buildings and premises in the area. He has been working with paint since he was a young boy.

Once the war began in Ukraine, Johnny questioned what he could do to help refugees who had travelled to Mayo. “I wanted to do something for the women and children who had travelled to our county and were making Mayo their home. After already going through two years of a pandemic, they were now in a crisis of war. Apart from raising money, I asked myself how I could help these people who were completely confused and lost. I knew they were traumatized by the situation they had found themselves in. So I decided that art is the universal language of children, most children growing up do art.” 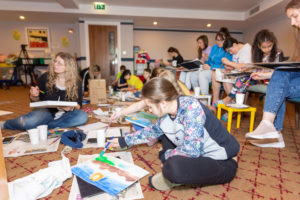 Johnny raised some funds through generous donations from East Mayo businesses, friends and family. “I went out and bought the essentials for art classes. I bought proper paint brushes so I could demonstrate the different artistic strokes.”

He then made contact with two hotels in Claremorris and Ballinlough who were more than willing to help out in providing a location for the classes. 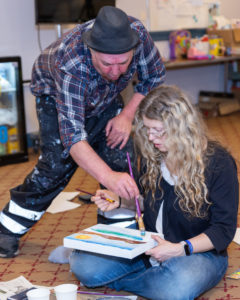 “Many parents and their children came along. There may have been a language barrier, but we had so much fun. I taught them how to paint lakes and trees and they enjoyed it so much. Personally, I had never taught a full class on my own before, which was a learning curve in itself, but to see the joy on the children’s faces was heartwarming. I found them all funny and engaging and we had the best time.” 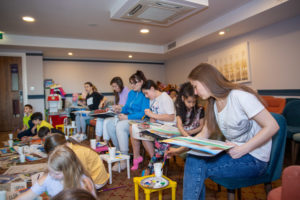 Johnny is now encouraging other artists, craft makers and musicians to organize events such as this to help Ukrainian refugees. “These people have found themselves in a different country with different ways of life and are all at sea. Events such as the art classes bring them together and take their minds off their troubles for two or three hours. I can guarantee those who give it a go will get as much out of the classes as the Ukrainians do. There is great satisfaction to be had from helping these people.”