Former inter-county GAA referee Michael Daly has labelled as “nonsense”, any notion that the opportunity for referees within Mayo to advance to higher class games does not exist. 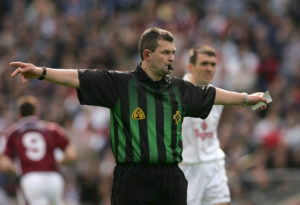 The Ballyhaunis native was responding to a discussion on the recruitment of referees at a meeting of Mayo County Board.
The board has established a committee to try and tackle the issue of declining numbers in the referee’s pool, the chair of which is South Mayo GAA chairman Mike King.
King, outlining the three main pillars to his committee as the Recruitment, Retention and Reward of referees, said that progression through the grades faster than is presently the case was important if Mayo GAA wanted to hold onto any new referees.
Garrymore GAA delegate John Farragher also said his club held concerns about the length of time it takes a referee to “climb the ladder”.
However, Michael Daly, a renowned club and former inter-county referee who is also chairperson of the East Board, argued that the number of whistlers from the county who are on the Connacht referees panel is evidence that the rewards are there for anyone good enough.
“That nonsense… there is progression in this county and we wouldn’t have six or seven lads in the Connacht panel unless we had it. We have progressed referees from this county with no problem.
“The progression system is there once you take a whistle. If you do a county final here they bring the assessor from outside to come in and look at you. If a lad is doing very well at underage football, he gets progressed all the way up.
“Assessment is to improve the referees and usually a person is sent there to chat with a referee afterwards, not to knock them or anything but to help them. The systems are there, there will be assessors out at the league and championship and if lads show up they will quickly note it,” Michael Daly assured.
Mike King has assembled a seven-man committee to try and address what has been described as a mini-crisis regards refereeing numbers in the county. Included are referees’ administrator Sean Mac Eil (Knockmore), club referee Padraig Doherty (Ardagh), inter-county referee Jerome Henry (Castlebar Mitchels), West Board chairman Shane Quinn, Bord na nOg secretary Ronan Kirrane and club footballer Gareth O’Donnell (Charlestown Sarsfields). 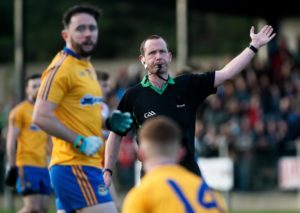 An appeal has already been made to every GAA club in Co Mayo to try and identify potential referees within their club communities and each of Mike King’s committee members have resolved to try and recruit “three to four” new refs by the end of this year.
King is keen to identify how it can be made more appealing to become a GAA referee and also told Wednesday’s meeting that referees are being lost for financial reasons.
“We’re losing referees at the moment, to the ladies game let’s face it. No one’s going to get rich out of refereeing but they can’t be out of pocket either.”