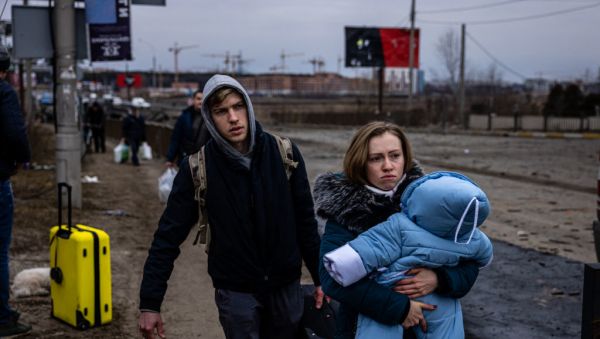 “A huge 81pc of respondents in Ireland said they were satisfied with Ireland’s response to the war in Ukraine, way above the EU average of 69pc,” MEP Maria Walsh said.

“The same percentage of Irish respondents (81 per cent) agree that since the war started, the EU has shown solidarity with Ukraine, with a massive 95 per cent approving of the EU’s humanitarian response and similarly high figures when asked if they approve welcoming Ukrainian refugees fleeing the war (90 per cent) and the EU’s financial support offered to Ukraine (89 per cent).”

The survey also found 86 per cent of Irish respondents approve of the economic sanctions the EU has imposed on Russia in response to the invasion of Ukraine.

“I stand in solidarity with Ukraine and all those fleeing the war – a sentiment which appears to be felt right across the EU and in Ireland, according to this survey,” the Midlands North West MEP added.

“My Fine Gael colleagues and I have consistently condemned Russian aggression against Ukraine and call for stronger EU sanctions including a wider embargo on Russian energy imports. Russia must end its attacks on Ukraine and completely withdraw its troops from the country. We wholly support a comprehensive investigation into and the prosecution of all war crimes found to have been committed there. We support the ongoing work towards Ukraine being granted EU candidate country status and membership.

“We cannot stand idly by and watch the pain and suffering unfold before our eyes in Ukraine. These innocent children, women and men need our help, and we must do all we can,” said Ms Walsh.

The Eurobarometer also found that 70 per cent of Irish people surveyed agreeing that the war shows we need greater military cooperation within the EU, while 77 per cent support the EU’s financing the purchase and supply of military equipment to Ukraine.