Hurlers are rebels with a cause as derby date looms

The Mayo hurlers will be aiming to record a third successive win when they welcome Sligo to Ballina this Saturday afternoon (2pm) for what has the makings of a gripping championship derby. 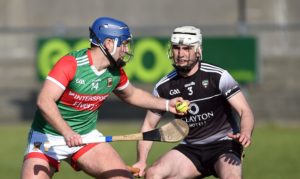 A week that has been dominated by the dispute between the Mayo team and its own County Board who have refused to make MacHale Park available to stage the game will eventually turn to the action on the field. The hope of supporters would be that the standoff has only strengthened the resolve of the Mayo players who have already managed to turn their season around in some style over their last two games, with wins on the road over Wicklow and London leaving Derek Walsh’s side in a strong position heading into the last two round-robin matches of the Christy Ring Cup.

The prognosis for the hurlers’ 2022 season had not been good after their Round 1 hammering at home to Kildare, which itself came hot on the heels of their relegation to Division 3A of the National Hurling League for 2023 with a play-off defeat to Wicklow in Tullamore.
But a battling victory in Arklow, backed up by that win in Ruislip the weekend before last, means Mayo are poised to make a late push into the equation for a place in the Christy Ring final.
As things stand with two rounds of the group stage to play, Mayo are joint-second in the Ring table, level with Derry on four points but behind the Oak Leafers on scoring difference. Kildare are streaking clear at the top of the standings, having won all three of their matches with an average winning margin of 22 points per game. Barring some unforeseen calamity, the Lilywhites should seal a place in the final when they go up against Wicklow this weekend.
There are no semi-finals in the Christy Ring this season; the top two teams at the end of the round-robin will progress directly to the final, which is fixed for the weekend of May 20-21. For Mayo to finish in the top two, they will likely need to win both of their remaining games, against Sligo on Saturday and at home to Derry seven days later.
Derry are at home to London in Owenbeg this Sunday, a match the Ulstermen will be heavy favourites to win. If they do, and if Mayo can overcome Sligo in Ballina, the final round game between Mayo and Derry, currently fixed for Ballina on May 14, will effectively function as a semi-final for the right to take on Kildare in the Ring final, which will be played at Croke Park.

That would heap enormous pressure on Mayo County Board to bow to popular opinion and allow their county side to play that match at Hastings Insurance MacHale Park which currently has only been made available to the Mayo senior football team since its resurfacing.
Mayo’s turnaround in form over the last two matches has been down to a few key factors. The team has been bolstered by the additions of some strong ‘outside players’, including brothers Ger and Joe McManus, the St Jude’s clubmen who were part of the Mayo team which won the Nicky Rackard back in 2016, and Joe Mooney, the Loughrea clubman and former Galway under-21 hurler who qualifies to play for Mayo under the parentage rule, his mother Julia Howard a native of Belmullet.
Mooney in particular has been a vital presence in the Mayo forward line in the wins over Wicklow and London, scoring eight points from play against the former and two from play in Ruislip.
“We had a tough few weeks,” Derek Walsh told the Western People this week. “It hasn’t been easy trying to keep the heads up but in fairness to the lads, they never started blaming each other or blaming us, they kept working hard and thankfully it has turned around a bit for us.
“We played well in London last week. We conceded two goals we wouldn’t be happy with but other than that the performance was very good.”
The return from injury of some senior players has also been an important factor. Shane Boland, the Mayo captain, struggled with injury during the National League but he has returned to full-fitness in recent weeks and has been leading the line from full-forward, striking for 1-6 in the win over London. The likes of Eoin Delaney and Dan Huane have also been restored to the side after some injury issues.
Experienced campaigners such as Stephen Coyne, Keith Higgins, David Kenny and Gary Nolan have been finding form while Kenny Feeney has also been getting more minutes under his belt as he works back to full match fitness after returning from Australia earlier in the season.
“Lads coming back from injury, and lads who were tired at the beginning of the year going straight from club to county, all those things took a toll. When you start losing a game or two it’s not always easy to keep facing into it every week,” offered Walsh.
“But the lads stuck together and we’re enjoying our hurling again now. This time of year suits us better. We’re not a big team, we like a fast game of hurling. So we always knew that we could turn it around but it was never going to be easy.” 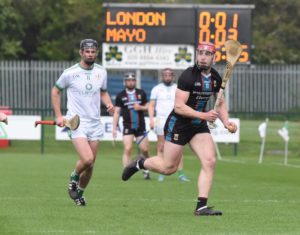 Galway native Joe Mooney in action for Mayo in their victory over London at Ruislip in the previous round of the Christy Ring Cup. Mayo host Sligo next Saturday. Picture: Sheila Fernandes

Sligo currently sit second from bottom of the Ring table with two points from their first three games, having lost away to London and at home to Derry in the opening rounds before recording their first win over Wicklow last time out. With a trip to Kildare to come in the final round, the Yeatsmen’s chances of reaching a final seem purely mathematical at this point; they will come to Ballina with the goal of recording a win to stave off the threat of relegation before their visit to Newbridge.
Padraig Mannion’s Sligo side won by six points when the counties met in Ballina in the league on the first weekend of March. They went on to reach the Division 2B final, losing out to Derry in the decider. Among their key men this weekend will be Andrew Kilcullen, the Hannify brothers, Conor and Mark, and Galway native Patrick Foley, who started on the GMIT team which won the Fitzgibbon Cup earlier this year.
“Sligo hurling has improved no end over the last four or five years. Anyone that’s involved at our level knows how good they are and how much they’ve improved,” reckoned Walsh.
“We’re hoping we’re going to be very close to them on Sunday. If we could sneak a win, the game the following week would be like a semi-final against Derry.”