An enjoyable game and a great occasion but last Sunday’s defeat was a bitter pill to swallow for Mayo players, management and supporters.
Put quite simply, Galway won the match with much less of the ball. Their economy and game-smarts ensured that they took the spoils on a glorious day for football, on a resplendent new playing surface in MacHale Park. 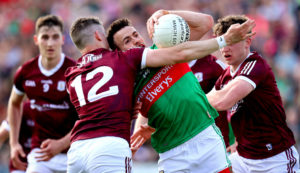 For the first time in what feels like an age, this was a real Connacht Championship affair. The crowds were back, the buzz was back and the sweltering sun made it feel like high summer. Unfortunately for Mayo, though, some of our old failings also returned.
What made the defeat especially disappointing was that Mayo undid an excellent first-half display with some unimaginative and dim football after half-time.
Given the way we finished the first period, I was hyper-confident that Mayo would romp home to victory. We were in a great place, playing football on our terms and with the wind advantage to come.
But, alas, Mayo suffered a systems failure when the game was in the melting pot midway through the second-half.
After a rapid start, James Horan’s charges really got to grips with Galway around the middle of the park and were playing some lovely football. There was a fifteen-minute period before half-time where Mayo were really on song, a lot of their players were humming and it is as well as I have seen the team perform for a while. In this period, Lee Keegan, Ryan O’Donoghue and James Carr were making hay down the right channel in front of the stand and all was right in the world as we kicked some beautiful scores. Jason Doherty was industrious and looked threatening at the top of the D, Aidan O’Shea was moving well in midfield, Diarmuid O’Connor picked up where he left off in the league, and Cillian seemed to be revelling in a playmaking, rather than finishing, role. Eoghan McLoughlin was another man who seemed rejuvenated and back to his best. The team were snapping into breaks around the middle, our defenders began to dominate their men and our footwork and finishing up top was sharp.
Granted, Galway had Finnian O’Laoi in the sin-bin for some of this period but the Tribesmen looked under enormous pressure and ill at ease on their own kick-outs. At half-time, I could only see one winner.
But as much as Mayo were on top, we never opened up any daylight on the scoreboard. Galway regrouped at half-time and deserve much credit for a cold, calculated and clinical second-half display. I have often felt that this Mayo team are much more effective playing against the wind as this dictates that the team must play a shorter game and carry much more ball through the hand – a game-plan these players are comfortable with. Into the wind in the first-half there was clarity in Mayo players’ minds about what was required.
With the wind at our backs, our thinking was much more muddled. We continued to run the ball when a long, fast ball would surely have helped exploit the space before Galway could get bodies back. It’s not like Mayo didn’t have dangerous forwards to kick it to either – Carr and O’Donoghue looked very sharp all afternoon. When running the ball with the wind, if we didn’t punch a hole in Galway’s rear-guard early we ran out of ideas and our attacks fizzled out. Galway set up a defensive wall, soaked up the pressure, forced turnovers and countered expertly.
Galway are a better team now than the one Mayo bullied in Croke Park last year. They are fitter and much more defensively sound. Apart from Jason Doherty’s blocked attempt, they coughed up very little goal opportunities. Cian O’Neill’s fingerprints are all over Galway’s defensive setup. They defended aggressively, not passively, in numbers and repelled a lot of Mayo’s running waves. It was akin to a Northern team’s defensive structure but that was by design rather than accident given Mayo’s recent travails when trying to unlock such organised, mass defences. 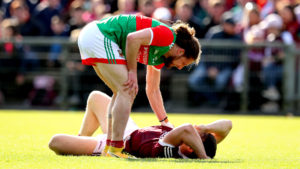 Damien Comer got man-of-the-match, and it is hard to argue with that, but he was aided and abetted by the masterful Paul Conroy. You’ll do well to see a better score than Conroy’s 61st-minute point when Comer started the ball in his own full back-line, rode some heavy Mayo hits, played a few one-twos with Conroy, before the St James’ man nailed the finish and stretched Galway’s lead to five points.
For me, the game was won and lost in Galway’s ability to kick the ball – both over the bar and into their forwards. The stat of Galway’s seven wides to Mayo’s fifteen tells a tale in itself but Galway’s tendency to pass high-quality foot passes into their forwards was another decisive factor. It seemed like Conroy himself kicked the ball more often than the whole Mayo team on Sunday afternoon. Besides shooting three points, he kept launching accurate and probing balls into his full-forward line and this put Mayo’s defence under huge pressure. Such was his confidence and competence with his foot passing that he hit two gorgeous outside of the boot free-kicks to open up the Mayo defence when most GAA players nowadays would try a simple, safe lateral pass to keep possession.
By kicking the ball so much, Galway stretched the game and could retain their solid defensive shape at all times. The ball also moves much faster than anybody so launching it long conserves energy and meant that Galway did not have to get into a running battle with a fitter, more conditioned Mayo.
Mayo actually did very well to keep Shane Walsh so quiet from open play. His free-kicking was majestic, though. I was seated right behind those three long-range kicks from the ground into the teeth of a tricky wind. They were the sweetest of strikes and dripping with class. Sean Kelly and Matthew Tierney, some of Galway’s other usual star men, were also kept relatively quiet as lesser lights such as Liam Silke and Kieran Molloy replicated their club form and were excellent at the back. In reality though, Mayo had as many good individual performances as Galway on the day but Galway’s system and tactics trumped Mayo’s.
You could tell by his reaction at the end of the game that this victory meant an awful lot to Pádraic Joyce and his management team. In many ways, Joyce needed a win more than Horan. A defeat on Sunday could have defined Joyce’s tenure as a failure. Looking ahead now though, their season is full of opportunity and hope. With continued improvement and more performances that show such heart and head, they can go deep in the championship.
Of course, Mayo are still well-equipped to go on a good run in the qualifiers and once again feature at the business-end of proceedings in July. The six-week hiatus will give the squad’s bodies and minds the chance to recharge, refresh, and recover.
The team’s form in the last few months has been worryingly poor so some soul-searching and introspection is required if we are to really make a go of this year’s championship. My biggest problem is that the team seem to lose games in the same way, making the same old mistakes. It could be time to rip-up the old playbook, try something new and get radical or else become redundant.