Pat Holmes: Mayo defeat is the result of a refusal to change 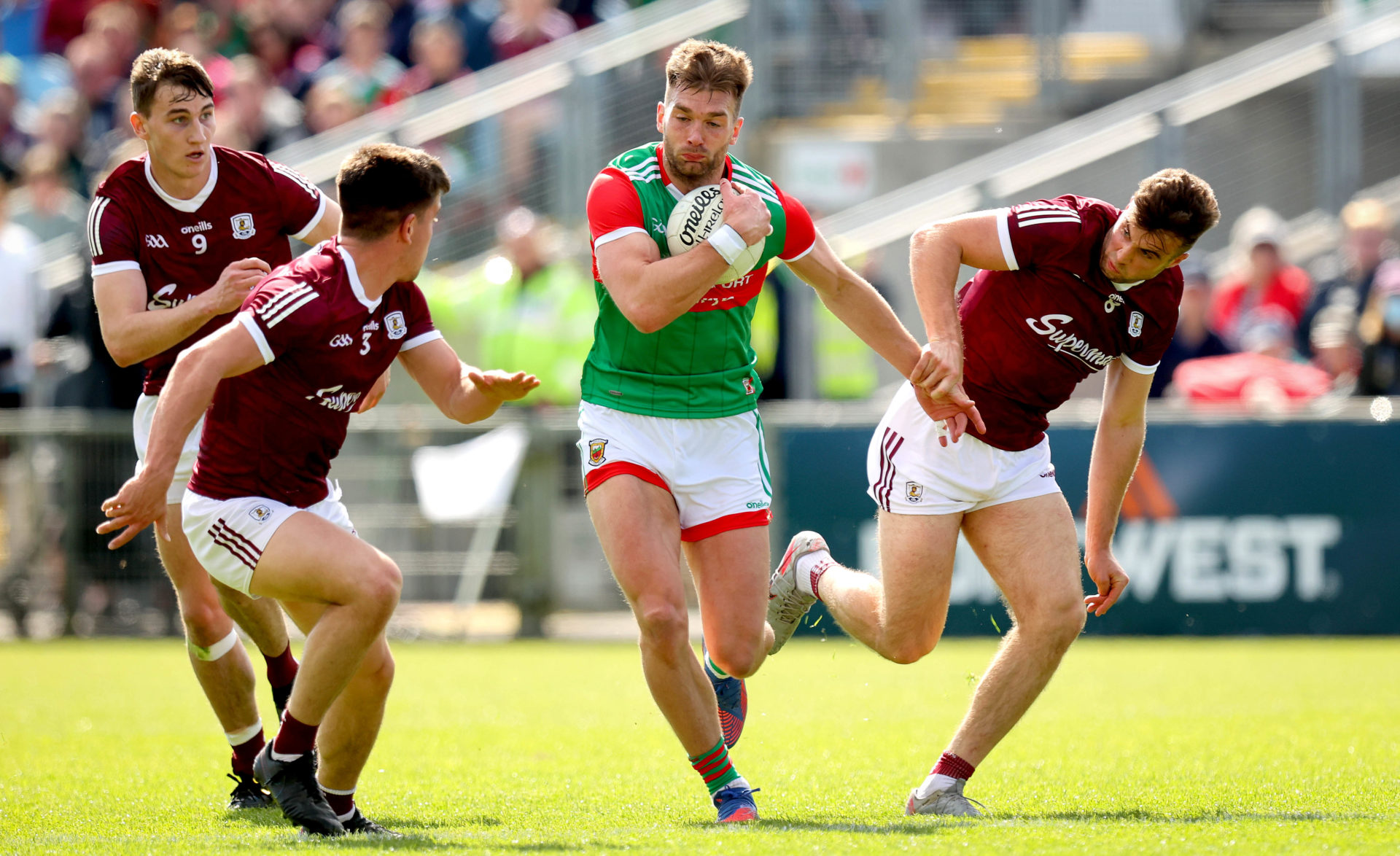 I got it wrong last week. I had said that the running game tactics repeatedly deployed by this Mayo team would probably be good enough to see them retain the Nestor Cup but that those tactics wouldn’t be fit for purpose when meeting some of the top teams further down the championship road. It turns out the running game wasn’t even good enough to win a Connacht quarter-final.

It was clear from last year’s All-Ireland final defeat to Tyrone and from the more recent National Football League final defeat to Kerry that Mayo urgently needed to establish both a defensive system and an attacking strategy built upon something other than simply running — or carrying — the ball. Galway are simply the latest team to have figured out how to counteract the Mayo way.

The running game requires, as the name suggests, significant running ability, which a number of the Mayo players no longer possess, particularly around the middle eight, and that’s before you even consider that Paddy Durcan, one of the team’s most athletic players, is currently absent altogether because of injury, and that Oisin Mullin and Lee Keegan are now predominantly employed in the full-back line.

You can contrast all of that with Galway, who got a lot right tactically on Sunday, even if they should feel a little disappointed to have ended up clinging on in a game they, if truth be told, deserved to win a lot more comfortably.

The Tribesmen really were full value for their victory — but Mayo contributed so much to their own downfall.

Once again, the Mayo players showed they had little idea how to break down a packed defence. It requires patience and accuracy and pace but their build-up play was ponderous, with lateral passing being the order of the day.

When the ball eventually arrived within shooting distance, it was predominantly in the outside channels on either sideline.

The decision-making of some of the Mayo players was poor as well, with many shots taken under pressure and that all contributed to an overall tally of 12 wides and two shots into the goalkeeper’s hands.

Galway had raced into a five-point lead after only seven minutes, with full-forward Damien Comer setting-up Johnny Heaney for an early goal with an excellent hand-pass.

It could have been even worse for Mayo as Kieran Molloy blazed wide from an excellent goal chance in the 12th minute.

In the final 25 minutes of the first half, Mayo did outscore Galway 7-2 to go in level at half-time. However, it appeared to me that the Green and Red were having to work much harder for their scores.

The reason for that was that Galway had a defined defensive plan in place whereby they deployed one and sometimes two sweepers.

They also had variety to their attacking play and were far quicker than Mayo at moving the ball from back to front, utilising kick passes where possible and finding Comer in central positions, which led to him playing a key role in a significant number of their scores.

So why such a change between this game and the victory of Mayo over Galway in Croke Park last summer, when the Green and Red set aside a poor first half to run out six-point winners?

A key reason was the midfield contest.

In last year’s Connacht final, the platform for Mayo’s success was the dominance enjoyed by Diarmuid O’Connor and particularly Mattie Ruane, where Galway couldn’t match their mobility. Paul Conroy, in particular, as Galway’s oldest player, got destroyed in the second half of that game, unable to live with the sheer pace and energy of O’Connor and Ruane.

However, last Sunday Mayo selected Aidan O’Shea at midfield and allowed Conroy to destroy us, predominantly because the same demands as in Croke Park last summer were not placed upon the St James’ clubman.

It was clear that Galway had their homework done. Matthew Tierney stifled Ruane and 32-year-old Conroy’s influence grew as the game wore on, scoring three points from play and having a hand in many of his team’s other scores.

Mayo nudging a point ahead through James Carr at the start of the second half — and the breeze now behind them — was only a false dawn.

For the next 30 minutes Galway rediscovered their rhythm of the opening quarter and ended up six points in front with three minutes of normal time remaining, totally dominating midfield during that period.

The importance of a reliable free-taker was also evident, with Shane Walsh dispatching three excellent frees from 45m against the wind to add to his left-footed effort from the first half.

It looked like they would run out as comfortable winners, but Mayo embarked on a comeback — one that was sparked by an excellent point off the outside of his boot by Lee Keegan.
The introduction of Kevin McLoughlin for Stephen Coen in the 64th minute added a much-needed injection to Mayo’s half-back line.

Following two converted frees by Cillian O’Connor and a point from play by Ryan O’Donoghue, an excellent strike by McLoughlin off his right boot brought it back to a one-point game.

However, it was too little too late for Mayo.

Mayo’s two best forwards were O’Donoghue and James Carr so it’s hard to understand why Carr, when Mayo were six points behind, was substituted when he, above most other players, is a natural scoring forward and has the ability to score goals.

It is bitterly disappointing to have been beaten by a Galway team that is far from the finished article but which appears to have learned from previous defeats and taken remedial action.
Padraic Joyce’s side has improved as a result and will probably improve further following this victory.

In contrast, there was no obvious difference to the Mayo team in either set-up or game-plan from the Division 1 final defeat to Kerry or indeed the All-Ireland final loss to Tyrone last September.
It is important that these next six weeks before the start of the All-Ireland qualifiers are utilised to develop an alternative to the running game and that the team is given a proper defensive structure — otherwise there’s only one possible outcome to this season.

I must admit I was left surprised and confused about a function held 10 days out from last Sunday’s key championship match, which apparently was to honour past Mayo footballers.
A noble thought on the face of it perhaps, except there has been a complete lack of information about who organised the event at Mount Falcon Estate, who authorised it, or what was the criteria to be considered worthy of being honoured — it is my understanding that not all recent players were invited to attend.

Must you have played only within a certain timeframe or was it players to have won Connacht medals? If so, there are many, many players who have given massive service to Mayo over the last 70 years.

Despite a couple of their top officials in attendance, the Mayo County Board has totally distanced itself from the organisation of the function, saying that any money collected would not be making its way to Mayo GAA.

Is everyone okay with that?

Should that in itself not be enough to raise alarm bells in the MacHale Park boardroom?

Last year I asked if the tail was wagging the dog when it came to Mayo GAA and the senior team being influenced by outside forces after some personnel were caught in breach of Covid-19 guidelines, not once but twice. The same question would appear to be still relevant.