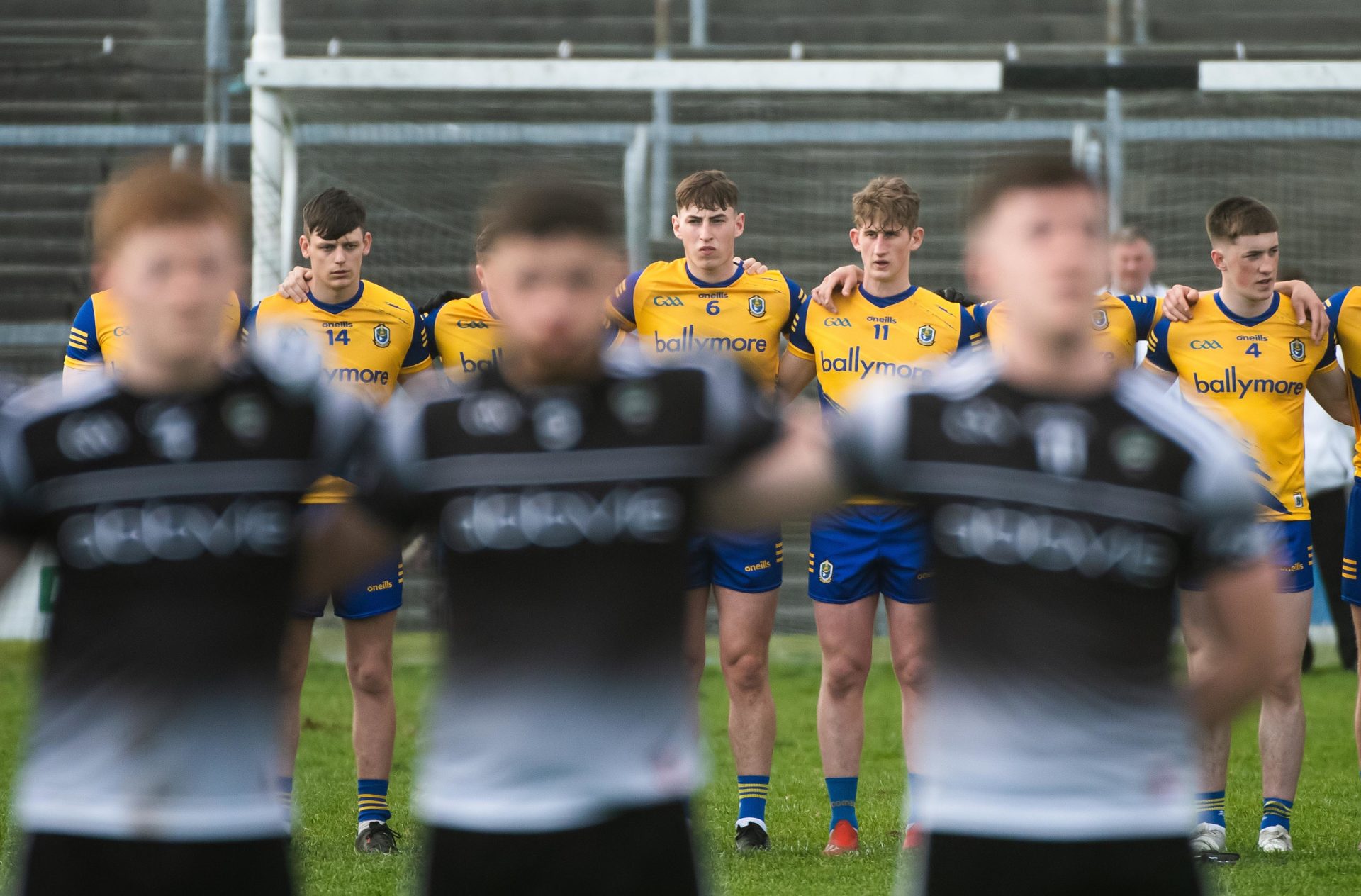 Roscommon and Sligo players during the national anthem before their Connacht U20 semi-final on Wednesday. Picture: INPHO/Evan Logan

The Sligo GAA County Board have said that they will not take part in next Wednesday’s Connacht U20 football championship final against Mayo if the venue for the match is not changed.

The match is currently fixed for the Centre of Excellence in Bekan, but in a statement released on Saturday evening, the Sligo County Board says that the match “is an event in which Sligo GAA will not be involved” if Bekan remains the venue.

The statement said: “On Wednesday night last (13 April) we formally noted our objection to Connacht Council of the announcement that of the Connacht Centre of Excellence as the location for the Connacht U20 final for which we had qualified minutes earlier.

“This communication was immediately dismissed. Since then we have attempted to communicate the depth of feeling in Sligo on this issue to the Connacht Council and to have the game confirmed to take place in Sligo as would be the norm under the longstanding rotation for intercounty championship games in Connacht including finals.

“We sought to do so in a constructive manner without unnecessary conflict and without disturbing the preparation for that game by the U20 team and by our senior teams who are involved in hurling and football championship action this weekend.

“Having achieved no movement on the issue by yesterday afternoon (Friday) we sent an email to Connacht Council which confirmed formally what had been conveyed by varied informal channels over the previous 24 hours. This email has not been acknowledged.

“We now find ourselves in a position where the players and management involved and our supporters are questioning why we are not saying anything publicly. Accordingly we are sharing the text of that email so that there is no ambiguity as to where we stand.”

“We have reflected on the email exchange of Wednesday evening last in respect of the staging of next week’s U20 championship final and the issue has been fully discussed by the players, their management and the Management Committee of Sligo GAA.

“Our U20’s achievement in qualifying for a Connacht final is not just based on 60 minutes of endeavour but six years together as a group that has brought a lot of pleasure to all those that follow the games in the county.

“For as long as anyone participating can recall, the hosting of championship games at all grades of football in Connacht, including finals, has rotated between the counties involved, something that we are sure will be acknowledged by officials and supporters in all the other counties, including our opponents next week, Mayo. On the last occasion when Sligo played Mayo at U20  level, in 2019, the game was played in Castlebar.

“Immediately after Wednesday’s semi-final game, it was announced through the media that next week’s final would be played at the Connacht Centre of Excellence at Bekan. Sligo GAA is a big supporter of the Bekan project. It is a critical and far-sighted piece of infrastructure that has already brought, and will continue to bring, huge benefits to the development of Gaelic games in the province generally and in each of the  counties, including our own.

“Its purpose however is to support the development of the games and to add to what was there. It is  not to replace the use of existing grounds for the hosting of major games that are a core part of the fabric of every season.

“It is clear that this decision has been made to facilitate television. While we greatly appreciate the value of media coverage of our games and the distinct contribution of TG4 in particular, there is no basis on which we can accept that putting the needs of a television station before the opportunity for players and supporters to enjoy a provincial final on their home ground can be justified.

“We are told this decision is being made because there are lights in Bekan and not in Markievicz Park. Are we seriously now scheduling one of the biggest games of the year in the province to suit the scheduling needs of a television station? We would respectfully suggest that TG4 rearrange its schedule for the evening to accommodate the match at an earlier time. If it is unwilling to do so, it says a lot more about its commitment to support the GAA than all of the marketing and promotion we see.

“We have also been told that we have to accept Bekan as the venue because this was referred to in an email issued after the Mayo Galway quarter-final late on the evening of Wednesday 6 April. It would have been utterly disingenuous of us to start discussing the location of a Connacht final when we hadn’t even played the semi-final and the suggestion that we should accept the location of the final as Bekan because it was in that email is simply ridiculous.

“If those charged with the administration of the GAA in Connacht insist on throwing in at Bekan at 7.30 on Wednesday next it is an event in which Sligo GAA will not be involved. This has been fully discussed by the players, their team management and the county committee. We are all at one on the point.”