Could Mayo bank their hurt and parade through the summer?

By Adrian Langan
Some people think me too much of an optimist when it comes to following the Mayo team: maybe they are right. Some others though, can certainly be too pessimistic. Those people were already in good voice as we streamed out of Croke Park last Sunday. And that is to be expected I suppose. But while it was a bad day and we were well bested, those with their hands on the panic buzzer should restrain themselves from pressing it just yet. 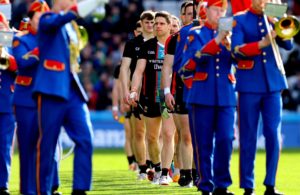 Lee Keegan parades behind the Artane Band with the rest of the Mayo team before their clash with Kerry last Sunday afternoon. Picture: INPHO/James Crombie

Plenty of us felt that it would have been better all-round if Armagh and not us had made the League Final. There is nothing worse than being wise after the event, but there were many good reasons not to be in Croke Park last Sunday. With the benefit of hindsight, getting a hiding from Kerry is the obvious one, but even an optimist like me could see those reasons before the game.
For what happened on the field on Sunday was brewing ahead of it. Wandering down to Croke Park was done with more trepidation than expectation. You could feel it in the subdued air. League Finals don’t matter so much unless you have some other reason that they need to matter. And so a strange aspect of the GAA season is that the weekend of the League Finals is usually the least consequential of all the weeks in which league matches are played. Promotion and relegation is what gives the league bite, not cups. That was part of the story on Sunday, when with the real big game for us against Galway looming into view on April 24, this match was no advantage to us.
As we took our seats, the news that Oisín Mullin was not going to start further underlined just what kind of afternoon this was going to be. The list of those not able to play for us just now grows ever longer. And it holed our chance in this league final before a ball was kicked in anger, or in our case, in sheer frustration. With our focus elsewhere, the opposite was true for the Kingdom: Kerry looked hungrier and sharper from the first minute and boy was it clearly demonstrated by the time the final whistle blew.
Before anyone starts suggesting otherwise, this is no excuse – we were well bested by a far superior team. But it must be remembered that our starting fifteen contained no Durcan, no Mullin, no McLaughlin, no O’Connor (x2), no Harrison, no Hennelly, and that is before we mention Tommy Conroy. Yes, yes, other teams have injury problems, but any team without those eight is going to find it tough going. And those players just mentioned aren’t just lads who would make the starting 15, many of them are integral to the way we play. That high-intensity game, bringing the ball to our opponents at speed and at all angles was absent last Sunday. Kerry don’t like when we play like that. They prefer – as they showed – when we don’t.
But let not the optimists among us – myself included – lose ourselves in a daydream. If we had our full squad on Sunday, few enough imagine we would have beaten that Kerry team, though let no one pretend either that it wouldn’t have been an entirely different encounter if we had, even if they in turn had their few missing lads back. Outside of dreams, positives were scarce, save for the welcome return onto the field of Cillian O’Connor. But that was the height of it. You knew it was bad when they went down to 14 and that was when they really pulled clear. Everyone – and not just we in Mayo – looked on Clifford and felt a shiver of fear. He is the real deal and his performance on the field last Sunday is a warning not just for this year but for the next decade.
On a poor day for us and for those hoping for competitive matches, thank goodness therefore for Roscommon and Galway. With their league campaign having already ended in success before their final, it was to their credit that they put on a fine match. But the lack of real significance did show itself at the final whistle.
When that whistle blew to end this tight game the Roscommon lads gave each other a polite tap on the back and kind of smiled, and as best my eyes could see, so did most of the Galway lads. That won’t happen at the final whistle if they meet later this year in the Connacht Championship – though of course we hope they don’t. 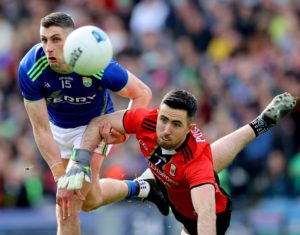 Preventing them meeting in the Connacht Championship has been our focus these last few weeks and will remain our focus over the next few. And it isn’t just the focus of that immediate match against Galway that provides the full context. After we play Galway, whatever the result, we will have at least one and up to two games against top tier teams to make an All-Ireland Quarter Final.
On the other hand, Kerry, residing in what we might call ‘splendid isolation’ in the Munster Championship, essentially get a bye into the All-Ireland Quarter-Final. That isn’t their fault by any means, but they don’t need to be worrying about big challenges ahead for a good while yet. Their focus was on winning last Sunday. That showed. It showed in spades. So, while no one likes to lose in a final, and absolutely no one likes to lose by that margin or that manner, it is to be hoped we can keep things in some sort of perspective. But that is just some context for the pessimistic among us. Saying all that doesn’t mean that we weren’t hammered or that Kerry aren’t the best team in the country as we enter the championship.
Nothing can mask or attempt to wipe away the mauling they gave us, or the hurt that comes from such a defeat. But hurt for a football team is not always a bad thing. So, the optimist in me will simply say that if we can get some of those injured lads back out onto the field, and if we can navigate our much tricker way to the All-Ireland Quarter-Final and beyond, Kerry may well meet a very different Mayo, with an altogether different focus, and with some anger in their bellies, it might look a little different than last Sunday.
But, for now, that is the daydream of an eternal optimist. Our focus now, just as it was before last Sunday, is Galway on April 24. In that game, the hurt from last Sunday we can use; it is the injuries that we can do without.